Blockchain technology is one of the immersive technologies which is currently taking the front seat in revolutionising the future world. Almost every industry has visioned that blockchain will evolve as the next big thing. In fact, various sectors like banking, logistics, gaming and so on have incorporated the technology and the Indian government has started showing interest towards it. The reason behind the rush of interest witnessed in this space is because of the security, fixed records, transparency on the activity.

Side by side with blockchain, in the past few years, a lot of popularity has been created around Non Fungible Token or NFT. In fact in 2020 NFT transactions increased 3X and has reached more than $250 million, as per the Non-Fungible Tokens 2020 Yearly Report from NonFungible and L’Atelier and it continues to grow in 2021. There’s a lot of misunderstanding or Myths around NFT, some call it bad investment, some call it useless, some believe it’s complicated.

As per news report, NFTs is that type of cryptographic token that implies true ownership of a digital asset, such as a piece of digital artwork or anything under the sun which has the potential to become a digital asset. These are digital collectibles exactly like any physical antiques and to buy both of them the buyer needs to undergo a bidding process through auction and so on. One of the important differences between physical auction and NFT depends on the transaction tokens. Physical auction is done through physical cash whereas for NFT, the transactions are done through cryptocurrency or cryptographic tokens.

Animation Xpress spoke to two personalities from the AVGC sector whose artworks are available on these platforms which can be bought using this new cryptographic token. They are senior artist Soumyadipta Roy and Vimanika comics founder Karan Vir Arora. Here’s what they have to say about their experience with NFT, what it is, it’s future and more.

Arora said, “NFT once sold, for example whoever buys a Vimanika art becomes the sole owner of that art in the whole planet. Because the digital asset contains codes which we will give along with the file. The entire original file will be transferred on the buyer’s blockchain technology and account. It seamlessly becomes part of the blockchain technology in the network, becoming like a currency in its own way. NFT is a token but not exchangeable so it is non fungible. NFT can be anything but as the time goes real value of that NFT will also start building up.The real value of the NFT will be when it will be able to contribute to the block chain technology.”

The fundamentals of blockchain technology depend on distributed networks and unchangeable records and the same goes for NFT.

Roy shared, “The system of NFT secures the origin of the creator, their sales and their royalty system from the time of the creation, listing and selling – in the new startups and established online marketplaces.” An example could be how the Art Gallery bought Roy’s version of “Goddess Durga” art piece (single edition) for about 1 ETH, which converts to Rs.1,78,000 approx in Indian currency.

“This helps creators (be it in traditional, 2D, 3D, VFX, AR, VR or AI) get directly known for their amazing work, and gets transparency in sales from such great collectors who were waiting to find such great talents. The ear of the smart ecosystem is shaping up quite nicely so far. I would love to learn more thoughts on this from readers here and would encourage them to drop in their thoughts so we can learn and cultivate the generation,” Roy added.

Challenges and authenticity of the platforms

The blockchain market place or NFT platforms are decentralized therefore there is a lot of confusion in the sector questioning the legitimacy of the platforms and the currency, which platform can be trusted and more.

Commenting on the currency and block chain platforms for transactions or exchange, Arora shared, “There are 20000 to 30000 types of crypto coins available currently that are unregulated. Binance, WazirX and all are quite dependable and we have been using it for a good amount of time. But you have to be smart since it is unregulated and it’s a jungle. You have to have a wallet, backup storage, and you have to perfect yourself because these are not totally 100 per cent like banks. Even today banks are not 100 per cent immortal so anything can crash. Anybody can have a few crores which can disappear. Therefore I think regulation will build up the reputation and clarity and a lot of these coins will be discontinued. There will be only a few of the dependable coins. Very few coins like Bitcoins, Ethereum, XRP will remain as they have been in the market for some time and have very strong technologies which banks are using.”

Adding to that Roy has shared that he has noticed a bunch of news on irresponsible profiles posting other people’s works because of which they have been banned and actions have been taken for justice on behalf of the actual owner of the digital asset. He strongly encourages everyone to flag any type of discrepancy, plagiarism to the nearest moderators.

Roy added, “Challenges are generally fair. There are so many amazing artists using so many ideas that it’s a wild competition of creativity of the fittest. And I’m really happy about it as there are now public examples of what really works and what doesn’t. There is an argument against the crypto ecosystem that it is not quite environment friendly because of its high consumption of electricity and carbon production for mining. So, as far as I understand, yes, this is indeed a volatile market. Especially when Bill Gates, Elon Musk and other leaders are making movements in it.”

Roy further expressed that the Art Gallery who contacted him, made a verified transaction and seemed pretty authentic to him. “As far as I understand from reading and hearing opinions, apparently cryptocurrency is believed to be 0.03 per cent illegal whereas cash is considered five per cent illegal because of its liquidity nature. Like money is a receipt of claimable gold value from a bank, blockchain is a secure serial number system which can be converted to money. And the crypto ledger has multiple checking systems to match and validate all transactions. When something is fishy, it flags the mismatch out – which helps identify any invalid tampering in the chain of blocks,” Roy further added.

While studying and experimenting on NFT, Roy’s first NFT created was sold in 24 hours by an European Collector who preferred to stay anonymous. Similarly for his second NFT, he received his first bid in 24 hours from another collector. As per his experience, NFT is an active market as of now. Roy shared, “I would love to express my love for my culture, my country, first. I am from West Bengal, India. I enjoy the mythology of Goddess Durga, we grew up with the Puranic folktales and colorful festivals – and would love to express it in a modern re-telling. I am happy to say a few collectors approached me for my Goddess Durga which has received bids from domestic and international collectors. Again, happy to say it was well appreciated by one of the former art directors from Disney San Diego (Marcelo Vignali), and lead creatives from Ubisoft United States. I try to be encouraging to the community as possible. There was a collection of 100+ baby stickers that my wife and I created earlier for our own game that never saw light, which now I would love to post on the NFT market.

To generally study and observe, I minted a few tokens myself. I found the Rarible platform most active for me so far after being trusted as a verified profile there. The other platform where I was invited in was Foundation app platform – and am very happy to see the creative works happening there. Opensea is another platform where we can start posting for free at first. There are other great platforms whom I am thrilled to reply to and explore soon.”

Vimanika has also created Dasha Avatar Exclusive Collection which are the 10 avatars of Lord Vishnu. So far they have created five NFTs including Varaha Avatar, two NFTs of Matsya Avatar, Narsimha, Kurma. Here is the glimpse of them: 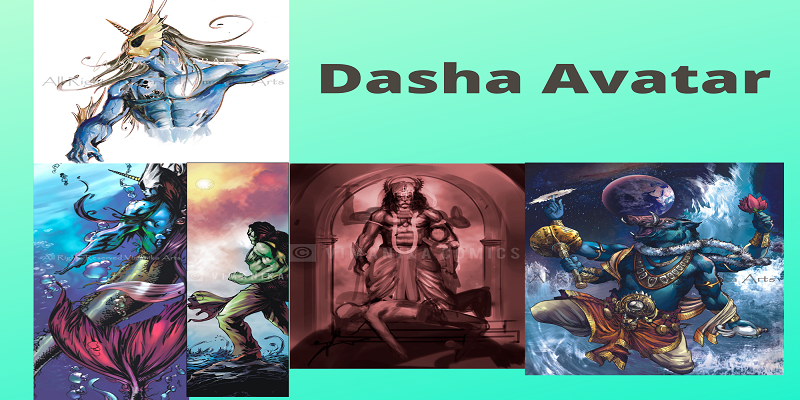 Arora shared, “Art will become a non-fungible token where I can invest and I can use that. In some places, art is being sold as part of blockchain technology which is essentially helping the network, transactions, and the observation helps to understand how blockchain technology  is adding and contributing to it. Therefore, it is a very evolutionary thing. Art is so subjective and once it mashes into and merges into the blockchain technology, then an art will be able to fulfill your investment. It will be like an investment which can actually help you in a seamless transaction and won’t be just an art.” Arora even believes that going on there is a huge possibility that their company might create an exclusive comic book for NFT.

Arora also expects that moving on, blockchain technology will evolve. It is still a niche and at the experimenting stage; the more one will learn, the more one will discover. He also believes that the investment with NFT will evolve in coming years and how it will impact or affect the stock exchange is what to look out for.