A normal match of Titanfall is going to include at least two “Did you see that?!” moments. Like, two separate times where you literally say, “Did you see that?” Out loud. It might be when you dash through a ruined building, jump kicking half a dozen AI-controlled grunts to death. It might be when you pounce from rooftop to rooftop and barely make the leap to the evac ship as enemies trydesperately to take you down. Or it might be when you eject from your doomed titan in the heat of a battle and watch from the sky as its nuclear core explodes, taking out every foe within a block. But no matter your skill level, and no matter how badly you’re winning or losing, you’re still going to feel the urge to scream, “Did you see that!?” because Titanfall–despite a few shortcomings–is a game that demands to be seen. 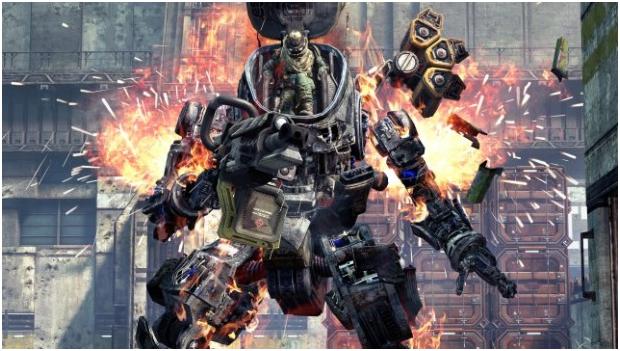 Titanfall’s features provide plenty of strategic options, but its manageable scope means that you always have the opportunity to use them. This is what the latter Battlefield games got wrong. It’s great to offer the player interesting objectives, vehicles or weapons, but they mean less if that player spends their time queuing, respawning or running to get to the next firefight. Titanfall never wastes your time. You always have the option to go and do something more exciting, to play better, or to try to generate another of the ‘you had to be there’ stories that the game excels at.

You’ll be amazed by how much is going on at any given time on the screen. You’re not battling in the streets of empty cities, you’re fighting alongside AI soldiers, piloting massive mechs, and shooting at enemy players that can tumble through windows and run up walls.

Matches are limited to 12 players split into two teams, and this restricted headcount is the foundation for all of Titanfall’s other successes. Lower numbers enable the game to incorporate immediate respawns without upsetting its competitive balance, and an intelligent dynamic spawn system means that when you die you pop back near-instantly a short distance from the next big fight. The game ensures that you are doing something exciting for the entire duration of each ten- to fifteen-minute match. 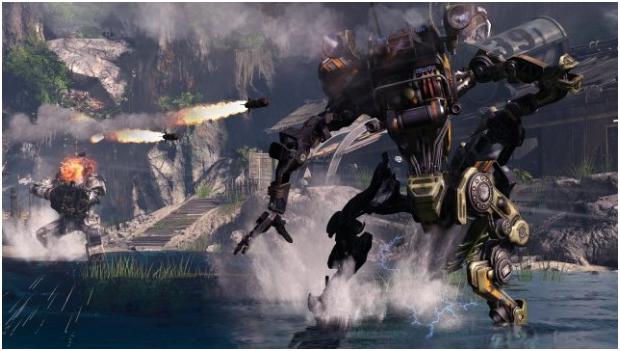 You might think playing on foot plays second-fiddle to piloting a Titan, but you couldn’t be more wrong. Sprinting up a wall and jumping through a window to surprise an enemy position never gets old. Chaining wall-runs and jumps to reach higher ground is a thrill in itself.

The speed and fluidity of movement even changes the whole flow of the gameplay. You’re rarely more than thirty seconds from the action, and it’s quite hard for all but the most skilled snipers to get a bead on a moving pilot.

Visually, Titanfall is more evolutionary than revolutionary. Its Source Engine graphics max out on lovely HDR lighting and crisp detail, not to mention big explosions and particle effects. However, if you look closely, you’ll notice how the vegetation barely moves, and how the ongoing signs of destruction are very limited.

Play modes could also be more imaginative. Attrition and Hardpoint are classic Team Deathmatch and Control Point modes, while Last Titan Standing and the new Pilot Hunt and Capture the Flag modes are also variants on well-worn themes. 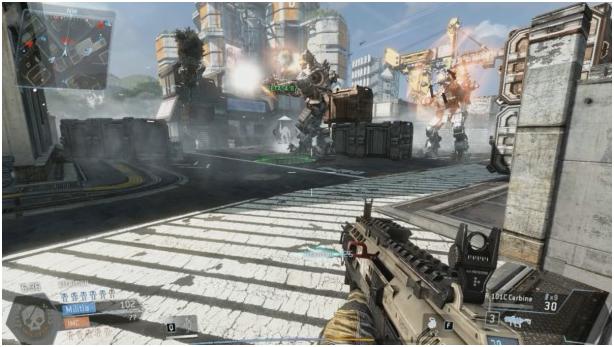 Like so much of Titanfall, the player count seems perfectly balanced. With all the grunts, spectres, pilots and titans on the field, you’re never left looking for team-mates to support or enemies to shoot.

Titanfall might not look or always seem that revolutionary, but it is a transformative online FPS in its own special way. We’ve never seen an FPS that combines two scales of action so successfully, nor one with such speed and fluidity of movement. 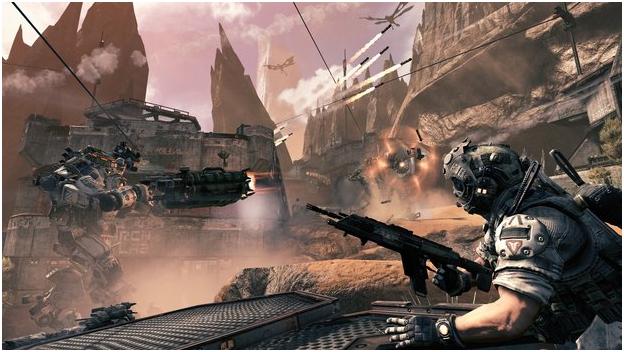 Everything from the weapons to the abilities to the maps to the Titans themselves is perfectly balanced. It’s tighter than the strings in a concert grand piano, and just as beautiful to play.