“Corus embraced Beyblade Burst, and were among the first broadcasters to license, air and promote the series to its Canadian viewers and fans in French,” said SUNRIGHTS MD Kaz Soeda. “The success of the first installment of the series on Corus’ Teletoon network in English created even greater anticipation among fans for season two. This will be supported by a new SwitchStrike toy line introduced by the brand’s master toy licensee Hasbro, as well as a new global multiplayer update on the Beyblade Burst app, and the addition of unique apparel designs from licensee Bioworld, an industry leader in licensed and branded apparel and accessories for the biggest entertainment brands in the world, who are expanding their Beyblade Burst apparel line into Canadian retail. Beyblade Burst Evolution will be everywhere in Canada in 2018.” 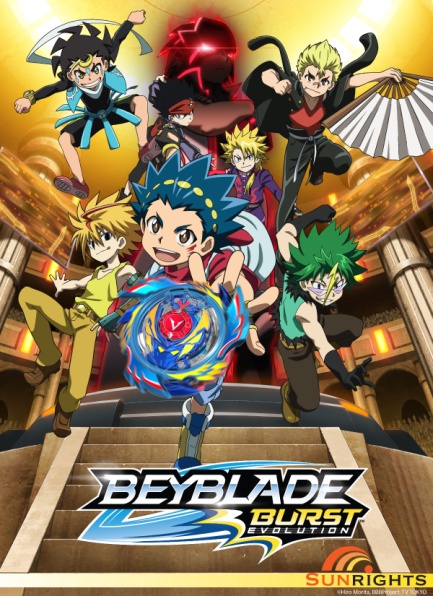 Comprising the second season of the Beyblade Burst series, 51 half-hour episodes developed under the new Beyblade Burst Evolution banner will welcome fans back to the world of Beyblade. The continuing saga of a group of passionate Bladers who follow their dreams on an journey to the top, Beyblade Burst Evolution catches up with Valt Aoi, runner-up at the Japanese National Tournament, as he travels to Spain after being scouted by the prestigious Spanish club, BC Sol. With the world as their stage, Valt and friends face daily challenges in their fight to make it to the World League. But before they can earn the right to a spot, they must first prove themselves in the European League. Will Valt be able to lead BC Sol to ultimate victory? And once there, does he stand a chance of beating the best Bladers on the planet? So begins the story of Valt’s evolution as he battles his way to the pinnacle of the Blading world in Beyblade Burst Evolution.

In addition to the introduction of the new Beyblade Burst SwitchStrike toy line, Hasbro has released the next evolution of the Beyblade Burst app, available now in the App Store and Google Play. This next evolution in the app allows fans to expand their play digitally and battle friends in over 90 countries worldwide through a vibrant global multiplayer with leaderboards, personalised profiles, an enhanced digital top selection and the capability of earning achievements to level up from rookie to ultimate BeybladeMaster!