The global rise and dominance of poker worldwide as the favourite past time has been stunning, to say the least. Since the 1990s, its growth has been nothing short but spectacular. For many Indian states, poker is primarily a game of skill. And they are right. It takes massive skill and experience to rule at the poker table, be it a real one made out of wood, or a digital table seen out of zeroes and ones. It is still clear that poker is facing many obstacles in India but the tide seems to be turning towards the side of poker. More and more States are softening on poker. The laws are getting more liberal and lastly due to COVID-19 lockdown online poker platforms have seen a huge surge in the number of users and hours of engagement.Today Poker has become so popular that everyone wants to learn the skill of the game by searching on the internet how to play Poker.

Citing the picture of Indian online poker scenario, in conversation with Animation Xpress, Poker Sports League CEO and co-founder Pranav Bagai shared, “Majority of people prefer playing Poker live for a social bonding experience but due to COVID people who thought that they will never play online, actually approached online poker platforms which resulted in online poker companies to witness a huge surge in lockdown.”

He has also noticed that the numbers which are reflecting now, post-Covid, are similar to what it was in pre-Covid but there are cultural changes among players because now people are open to learn and play online. “Thus be it gaming or poker it is actually booming,” he added.

Today due to the advancement of technology our daily life has witnessed a paradigm shift. One such change that Bagai wanted to bring to Poker in India is the real-time virtual tournament setup which is no less than any esports tournament. They had recently organised Virtual Poker League, a charity tournament with 30 finest poker players of India, where they have integrated video within the live stream. The format allowed the viewers to witness the thrill and excitement of a live game virtually. It was not just about the face of cards, but it was a showcase of the video of each player who is playing. The format is an absolute breakthrough because it has never been attempted anywhere else in the world. Specially designed shoot kits had been sent out to all the 30 players participating in the tournament, to ensure uniform and standardized videos during the event. Apart from that, there were commentators/shoutcasters for the tournament as well. Shifting the poker tournament on a virtual space was literally the Wiser Gamblers move.

The experience of esports like virtual poker tournament has to run like a well-oiled broadcast machine. With the well-researched software production, VPL has scaled up and has set a benchmark in the professional poker tournament. Talking about how they created the VPL 2020 space, Bagai shared, “VPL 2020 was a game-changer! Because our company is the only company in India that actually covered live Poker production as well. For all the live stream poker production in India, it was our company doing it. When you think of a four-camera set up around the poker table, you couldn’t zoom in to every player with no branding opportunities (there were but had to be at the frame). So what the virtual Poker league did was that all the six players could be seen all the time which is not possible in the traditional live sport. Plus we had to manage the sound as there were sounds of players, commentators as well in the live environment which is a really really tough job. Now that everything is digital therefore all our feeds – camera and sound feed- came individually as a separate feed. Therefore it was very easy to put it all together.” 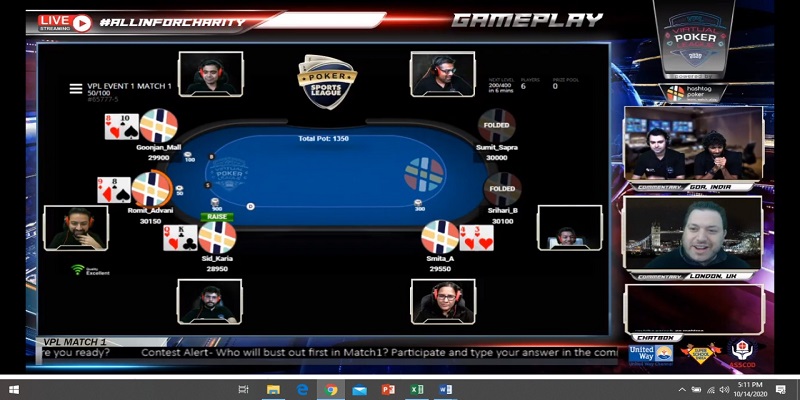 He has expressed that people who don’t know much about poker or play it, find it entertaining.They could see the poker players talking, listen to commentators, and at the end when only two players have been left, the camera could zoom in to them which was the entertainment quotient for the viewers. It took three months of preparation time for them to plan out the mix of production skills and technology. He added, “There were a lot of challenges but we had a very good production team therefore it ended up well.” With this, he also shared that the branding opportunity for poker tournaments also opened.

The tournament was streamed live on their official Youtube channel and eventually, in the future, these streams will be available on the apps which are in progress. The engagement of players and the audience were good as players were also engaging with the audience while streaming online.

With the same idea of virtual poker, Poker Sports League has returned in a new avatar as Poker Sports League – Virtual (PSL-V) and its qualifier has commenced and will go on for two months in a virtual format with two to three matches per week. And in this Poker tournament, anybody can participate. To participate, the poker enthusiasts can register on the company’s proprietary mobile application – Hashtag Poker. Bagai added, “With the commendable response we received for the exhibition tournament – The Virtual Poker League, we are positive for increased participation for PSL-V. The format of the league being virtual and panned over 21 days, will automatically give more time to the players, unlike the usual five-day format.”

He also shares that poker streaming in India is also new. All the big poker tournaments that are happening in casinos, India Poker Championship, Baazi Poker Tour, have been the streaming partners for them. Commenting on why it was necessary for them to take a leap, he shared, “Since the world went digital, we had to find  the model that works online as well.”

Lastly, he expressed that in the coming months there will be a lot more poker content, virtual events including PSL 2020, and within the next one month Poker will be streamed in India at least two to three nights a week!