Krafton’s BATTLEGROUNDS MOBILE INDIA (BGMI) which is currently in its beta phase, will soon be open for all. Gaming aficionados are extremely excited for the launch. 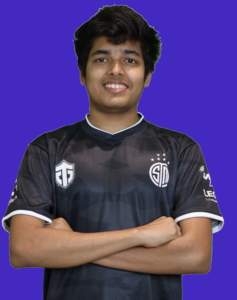 In conversation with AnimationXpress, 19-year-old esports athlete and influencer Jonathan Jude Amaral a.k.a TSMentJonathan shared, “For me, I am so excited for my family, which is my game. So many positive vibes are coming because the game is just around the corner, and the best part is that it is coming with a special focus on the esports scenario as the game is Indian made. It will have specific esports, which will be India based and for everyone. For upcoming talents this is a fresh start because the game is new. There will be some changes, and I am looking forward to what will happen for LAN tournaments, but now because of covid, events can be delayed and I am so much excited for it.”

Jonathan is based in Mumbai and has crossed many milestones in the gaming world. He is a popular PUBG Mobile player who won various titles including PMCO Fall Split SEA 2019, PUBG Mobile India 2020 and many more for TSM-Entity. Apart from that he is a popular game influencer who has 2.5 million YouTube subscribers on his channel, titled as Jonathan Gaming, which is speculated to hit five million subscribers by the end of 2021.He is also one of the best in a roster of 200+ talents that Trinity Gaming boasts.

There is a plethora of battle royale games available on mobile now and post-ban of PUBG Mobile influencers/players have played those games. Commenting on whether it will be a challenge for players and influencers to shift their focus to BGMI once it comes out from the beta phase, he replied, “BATTLEGROUNDS MOBILE INDIA undoubtedly proved to be the most awaited game. Everyone has been eagerly waiting for the game to launch. Deep down we all know that everyone was grinding hard to prepare for BGMI by playing other games. So, I feel it will be easy to resume for BGMI game mechanics.”

PUBG Mobile has stayed at the top for a long period in India and when Jonathan played in the last world league, the game was at its highest peak at that time. So everyone was disheartened when the game got banned. He added, “When the ban was announced, I was wondering, what to do now? I played two or three games which I enjoyed initially but later I didn’t play them anymore and I was not taking loads of anything and was focused on streaming.”

Post ban of PUBG Mobile, players like Ghatak and Scout advised him to not worry and focus on what was available and go with the flow. During that time he continued with streaming and interacting with everyone, in fact, many asked him to live stream as everyone predicted that PUBG is on its way. Now with the days for BGMI mass launch inching closer, “it is going to be very joyful and I am so much excited,” he expressed.

It was a sigh of relief for pro players like Jonathan when the BATTLEGROUNDS MOBILE INDIA was announced especially for Indians who wanted to continue their career in esports. He is predicting that the game will be a hit and will open a chance for underdogs to prove themselves.

various games; however, Shroud is also an esports athlete. Ninja and Dr Disrespect have also played various games, and are currently not playing any particular game. Instead, they play a variety of games. Which is very joyful to everyone, and I also watch and enjoy their streams. I get inspired by their streams and learn from them how to interact with everyone. Gaming influencers can stream many games. On another side, esports athletes stream a particular game to have a bright and promising future as they have to grind that particular game. I will give one small example, if you tell any PUBG Mobile player to play FreeFire, then he will not be able to play it easily. That’s the difference between them.”

He also shared that he looks up to popular influencers like CarryMinati and Tanmay Bhatt’s streams. We asked whether these popular influencers exploring gaming space could be challenging for gaming influencers or not, to which he replied, “People came to know me from my tournaments. People came to know me because they saw something in me. So, people come to watch my gameplay, and I try to entertain them, interact with them, and I learn from CarryMinati and Tanmay Bhatt how to interact with the public and entertain them.” With his reply it seems that every influencer has their own talent and individuality therefore they grow accordingly.

According to him, his daily schedule is simple but he thinks it might sound different to others. “I used to wake up anytime between 1-2 pm, then eat food and freshen up. After that, I used to do game training/practice at scrims and all. Post this, I used to go live on YouTube at 7:30 pm or 8:00 pm till 10 pm and eventually stream on loco. Now my schedule has taken a bad turn as I end up waking up at 4 or 5 pm, and now, with BGMI releasing, I need to get back to my previous plan, or else I won’t be in a good shape.”

Sharing some behind the scene insights from shoot of BATTLEGROUNDS MOBILE INDIA pre-registration video, he shared, “The entire shooting experience was lovely and I enjoyed it a lot. The surroundings were new for me because this type of arrangement is usually for movie shoots, so I got a different exposure. With Arshad Warsi sir it was a great experience. Dynamo, Kronten and I were exhausted during the shoot as the shoot was from 11 am and ended late. No one knew about that shoot. It was surprising for everyone, but behind that, how much we worked only the four of us know. Though I had fun, we were so tired and got to know about the actor’s life. It’s so hard!”

Earlier Gametube posted that TSM is planning to drop their BATTLEGROUNDS MOBILE INDIA roster. However when asked about the roster, Jonathan shared, “As of now, there are no changes in the roster. It is the same as previous, including Neyoo, Clutchgod, Zgod, Ghatak and me. This will be the only roaster for upcoming tournaments, and I am very excited about that.”