Amar Chitra Katha’s graphic biography on Vikram Sarabhai was released today during a special valedictorian function held by ISRO to celebrate the centenary year of Sarabhai. The comic was launched in the presence of some esteemed speakers, including the honourable president of India.

Sarabhai was one of those rare people who seemed to have it all. Supremely intelligent and born into a wealthy family of industrialists, he could have been content to live a life of ease and luxury. Instead, he used his gifts to help India rise after independence. A renowned scientist, industrialist, institution builder, diplomat, social reformer and visionary, Sarabhai believed that science and education could help India leapfrog into the future.

Never the one to doubt the capabilities of his fellow Indians, Sarabhai set about building a space programme at a time when India was still a fledgling nation. He used atomic energy and space technology to develop agriculture, fisheries, meteorology, education, and communications. Along the way, he set up the IIM-A, PRL and that beacon of light on India’s shining sky — ISRO. 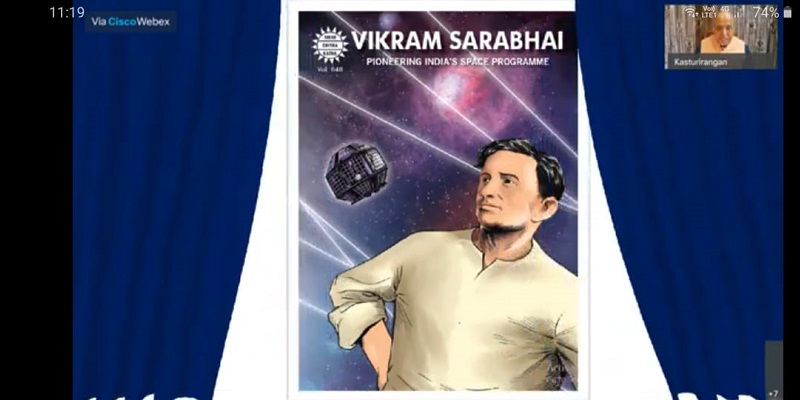 Talking about the event that took place today, Amar Chitra Katha president and CEO Preeti Vyas said, “It is indeed a great honour and joy for us to release this special comic on the life of Dr Vikram Sarabhai, the father of India’s space programme. I am sure his story which embodies the values of self-belief, curiosity, innovation and vision will inspire all the young Indians who read it to reach for the stars!”

The Amar Chitra Katha comic has been scripted by Tripti Nainwal and has been illustrated by Arijit Dutta Chowdhury. ACK is an Indian publisher of graphic novels based on biographies, religious figures and cultural stories. The publishing house has earlier released comics on great figures including Anant Pai, Dr. Sarvepalli Radhakrishnan, M. Visvesvaraya, Dr Verghese Kurien, Dhyan Chand, Muthulakshmi Reddy, J.R.D. Tata to name a few.