Originally titled, Myth, it began as a VR (virtual reality) experience, bringing a whimsical forest to life in order to make viewers part of that world. Disney+ has now released a non-VR version, and the animation is proof that Disney animators have done a phenomenal job leaving no visual details when they’re given the opportunity to go big. 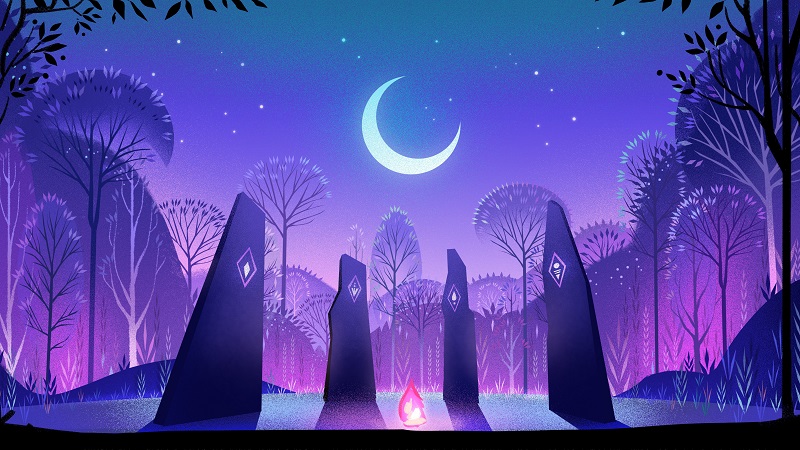 The synopsis reads: In the woods near Arendelle, a woman opens a book to regale her children with the legendary stories of the elements, earth, wind, water, and fire (as well as a fifth element which is, in this case, humans). No surprise, the humans ruin everything. Soon we see a fiery woodland creature spreading flames across the land, then another appears to douse the flames, and equilibrium is restored. The cycle continues until the humans – the fifth spirit – arrive. The human spirit coexists with the other four for a time, but eventually loses its rhythm and throws the cycle into chaos, eliminating all the other spirits. “It is said that if the fifth spirit can find its rhythm, the others will return, bringing with them that beautiful harmony, and the world can dance again,” the storyteller concludes. Be the change you want to see in the world, because you mucked it up in the first place.

The story is narrated by Frozen 2 star Evan Rachel Wood (Queen Iduna), who is just a storyteller here, explaining to her children a story of how the elements preserved harmony on earth by keeping one another in balance. When her narration trails off, this tale is depicted by the essences of these spirits blowing through the cloudless, moonlit forest that glows with their presence. 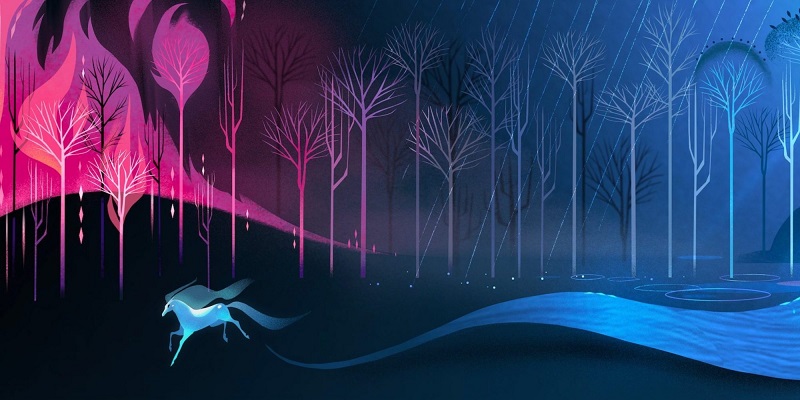 The animation is used beautifully, and it’s evident that production designer Brittney Lee, who illustrated the book Mary Blair’s Unique Flair, has been inspired by Blair, one of the original Disney artists (she designed all of the visuals for the It’s a Small World ride, and other Disney projects, including Myth). Given Myth was originally created for a virtual reality experience, it represents and hints at the next generation of Disney art and technology, applying classic Disney visuals to all-new platforms.

Director Jeff Gipson said in a statement, “Much like Fantasia, Myth was created to be ‘very much a visual poem, in a way,’ and it is. It seems daunting to tell a story about the symbiosis of humans and their world, but the animation team is very successful in doing it visually.”

Though the animated short available on Disney+ isn’t as immersive as the original VR version, the beauty of the pop-up style of animation used in the production is very much present. Speaking about the film’s Disney+ debut, Gipson added how bedtime stories and the world of Frozen helped inspire this new animated adventure.

“So when it came to Myth: A Frozen Tale, I started thinking about what types of stories what a bedtime story would you be told, if you grew up in or around Arendelle. And this is that’s how Myth kind of started, and I was really thinking about those elemental spirits who are such a big part of Frozen 2. I was really inspired by the graphic look of shadow puppets and pop-up books and imagine a world that if you were able to step into that kind of pop-up book, that story, what would that look like as a stylised version of the Frozen 2 world?” he said.

Myth: A Frozen Tale begins unconventionally with a behind the scenes and making of the piece look, something that’s generally included as a DVD extra or a bonus clip. In the introduction, Gipson and Lee, for whom Myth was a labour of love, explain how the short came to be, and the techniques used to create the beautiful animation experience.