Winners of the Asia TV Forum & Market (ATF) Animation, Chinese and Formats Pitches were announced after a series of online Live pitches that took place virtually.

For the pitch winners, clinching the top honours was a recognition of the hard work they have put in. Pang Mee Mee, a Singaporean whose entry won the Chinese script writing category, shared that the win gave her a confidence boost.

Pang was among the finalists who presented their ideas to the judging panels. The three panels, which included leading producers and commissioning editors, also provided valuable input for each of the projects.

The series of pitches is part of the ‘In Development’ programme at ATF Online+, which aims to spot ideas and groom Asian talent. Apart from providing them a platform to showcase their creativity, winning projects stand a chance to be linked up with well-established industry players, helping to propel the winning concept into production for exposure within and outside Asia. 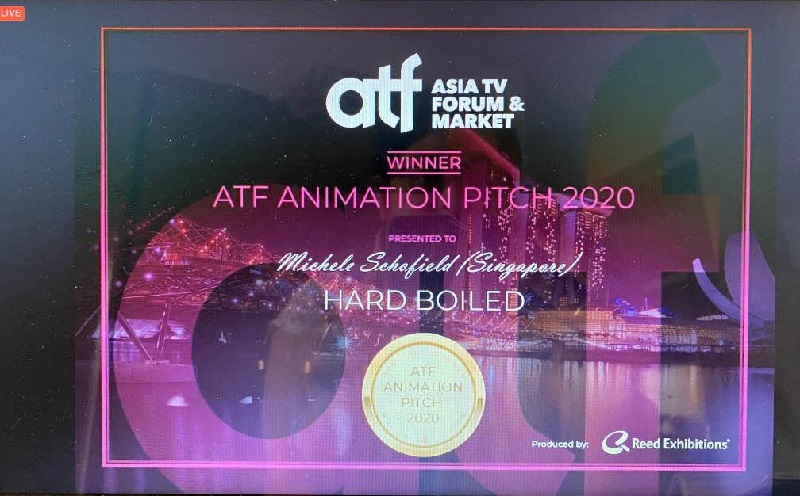 Winning the ATF Animation Pitch – into its fourth edition this year – was Hard Boiled by One Animation.

The animation is a fun, larger-than-life comedy set in a town where all the characters are food-based, and follows the super-sleuthing antics of best friends, Benni and Hammond. Inspired by childhood classics Spongebob Squarepants and Scooby-Doo, the best friends strive to become the greatest detective pair ever known.

One Animation Content Distribution SVP Michele Schofield said, “This win is testament to the hard work we have invested, and we hope that one or more broadcasters see the fun and the potential in this project and come on-board as commissioners or co-production partners so that we can bring this series to life and make kids laugh with every episode.”

Organised by Reed Exhibitions, ATF Animation Pitch is the premier Asian pitching competition where individuals, students and small to medium-sized companies can share new and innovative concepts for animation targeted at kids.

Yeoh Chooi Keen and Liew Mei Ying won the Online Drama Series award for Seven days《七天》. Their story is about a girl who is on the verge of death after saving a boy. To survive, she bargains with a soulbringer and enters the dead space to accomplish the miracle of salvation for the soul. Facing souls with deep obsession and full regret, the hero and heroine are inspired to love life and cherish the person and things around them.

“We are extremely honoured to be winning this competition. Although we are only amateur screenwriters, we did it. This is a great encouragement for us, and we are determined to continue to work hard and make greater progress in future,” stated the duo.

Winner of the theatrical/online movie category, Sim Soo Kee and Tan Yoke Ching, impressed judges with 《绑架案》, The Kidnapping Case. The movie tells the story of a former criminal who decides to kidnap someone for his daughter’s medical expenses and in the process, unintentionally kills the hostage.

“The pandemic gave me better insights into human nature. When society is in turmoil, some people are selfish to preserve their lives, whereas others would sacrifice themselves to help others. Our script was completed during the pandemic and is thus affected by this social phenomenon. Our characters exist in grey areas,” noted Kee.

The pair hopes that the different viewpoints in the script will resonate with the public and become a meaningful script for society.

Winner of the Chinese script writing category was《茹茹的全家福》, the brainchild of Singaporean Pang Mee Mee. Pang, who has no prior experience in film writing, says she was inspired by her children.

Her script tells the story of a young policewoman who comes across a family portrait drawn by five-year-old Ruru. Soon, she begins to suspect that Ruru’s family could be involved in a missing person case.

“I hope my story will be made into a movie and through it, people will be reminded to show more care and concern for the people around us. Sometimes, a little care and support shown can provide just enough strength to carry us through a rough patch in life,” Pang added.

Co-organised by Reed Exhibitions and G.H.Y Culture & Media, the ATF Chinese Pitch provides a platform for talents from across the globe to expand into Chinese-speaking territories. Each of the three winners received a cash prize, and the potential for their scripts to be brought to life on a screen someday.

Blog Wars, which takes an inside look at how a restaurant is launched, came up tops at this year’s ATF Formats Pitch. In the piece, producer Nick Calpakdjian combines different formats, and puts influencers into leading roles. Calpakdjian added that he was inspired by his work with Chef Will Meyrick on his series “Recipes for Success” (Discovery Asia).

“Blog Wars is a concept we have been bouncing around at the office for some time and the ATF Pitch gave us the push we needed to formulate a plan and present it to the market. I am hoping that we can use the momentum gained from the win to take our project to the next stage of development and meet like-minded media companies that will assist us bring this production to the world,” commented Calpakdjian.

The ATF Format Pitch, organised by Reed Exhibitions, received entries from 15 countries and regions this year. Blog Wars was selected out of five finalists.

Organised by Reed Exhibitions, ATF Formats Pitch is the premier Asian pitching competition designed to discover innovative concepts for new and original non-scripted entertainment formats from the pan-Asian region. This platform showcases the best of Asia and exposes ideas for export and development within and even outside of the region.

The next edition of ATF and ScreenSingapore – held under the umbrella of Singapore Media Festival  – is slated to return from 1 to 3 December 2021.