Netflix and Green Gold Animation have been basking in the glory that preschool animated series Mighty Little Bheem has earned them. After two very successful seasons and special programming, the streaming giant launched the third season yesterday, 25 September.

With 15 episodes of six minutes each, Mighty Little Bheem season three brings in greater fun and adventures. Speaking of what’s new and exciting this season, Green Gold Animation founder-CEO and Mighty Little Bheem (MLB) director Rajiv Chilaka shares, “More mischief, more mightiness and more new animal friends make MLB season three extra special. The bond between Bheem and Kalia grows stronger as the duo have some crazy stories. Bheem also experiences snow for the first time ever, has a fun adventure with the moon and does many more exciting things this season.” 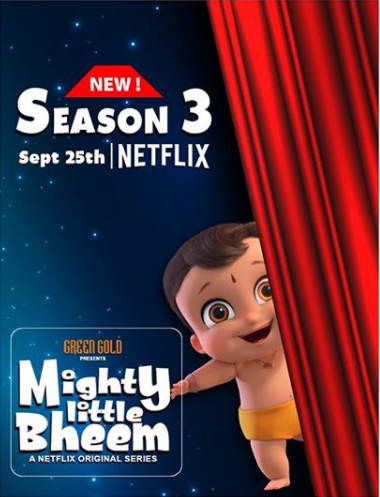 With the OTTs foraying into the Indian landscape in 2016, content consumption has seen a radical shift across the country. Additionally, the pandemic has provided a tremendous boost to what and how content is consumed presently. Indian animation industry has also been majorly benefitted with the OTT players taking up acquired titles and original IPs. Mighty Little Bheem, the first Indian animated spin-off IP (Chhota Bheem), has been a milestone, making the road a bit easier for more homegrown animated content finding a place on any reputed streamer.

Wowing audiences across the globe with its previous seasons, it’s quite natural to feel pressure to meet the expectations of the standard it has already set. Elaborating more on that Chilaka states, “The audience accepted and received baby Bheem with a lot of love worldwide. We put in efforts to create a show that would hold its own with global counterparts both in terms of animation quality as well as storytelling. I believe we managed to do it right and will continue to live up to and set new standards. I really believe Mighty Little Bheem has touched the hearts of the kids watching it. The first season itself reached over 27 million households and its following season as well as specials have received amazing response. I hope this season too reaches more households and entertains many more children across the globe.”

Created entirely in-house at Green Gold Animation (Hyderabad), the third season has all the ingredients for kids and families to enjoy and spend quality time during the still continuing quarantine. The lockdown has also seen a significant rise in kids consuming more content both on TV and OTTs. A number of parents have revealed to Animation Xpress that their kids prefer to watch and re-watch television shows (targeted to them) on respective streaming services along with them. The trend of co-viewing hence, is going to stay for sometime, and the numbers of Mighty Little Bheem’s previous season’s views (on Netflix and YouTube) are an instance of that.

Being such a global success, Green Gold Animation naturally has further plans to expand this property on and off screen. Adds Chilaka, “Mighty Little Bheem is a show with immense possibilities. This is a show which has been accepted globally and that broadens our plans. We are working on shaping it into a global brand in licensing and merchandising (L&M) and will try to build a digital ecosystem around the IP. I know that the show is bringing a lot of joy to children and that fills me with hope that the property will only grow in the coming years. Mighty Little Bheem is taking baby steps towards becoming a global phenomenon. We hope this will happen in the near future.”

Chilaka further confides with Animation Xpress that the animation studio is working on a few pre-school show ideas, a genre that he thinks is still to be explored.  “We are most excited about The Questioneers – a special series on learning and how to learn,” says he.