Guru Studio’s new preschool animated series, Pikwik Pack that premiered in the U.S. in November, has amassed an enthusiastic fan following and appreciation from kids and parents alike.

In early December, the animation studio announced the series would be premiering in Canada on Treehouse 26 December onwards.

Featuring four adorable animal friends as they work together to deliver magical surprises to the kind citizens of their bustling town, Pikwik Pack perfectly captures the universal joy of receiving a package – an especially timely concept today, as families everywhere have developed a deeper appreciation for delivery services and these essential workers!

The official description follows: In every action-packed episode, a new surprise arrives at the Pikwik Post that must be delivered! Together with the intrepid Pikwik Pack, young viewers learn about navigating directions, geography, and weather to get the packages safely to their destinations. And though they may face rough rapids, stormy skies or a foggy forest, when they work together, the Pikwik Pack always delivers!

Animation Xpress spoke to Guru Studio president and executive creative director Frank Falcone on the new animated IP. Below are the excerpts:

> What’s unique about the Pikwik Pack that makes it stand out?

All kids love getting surprises. There’s a universal appeal discovering what’s behind a wrapped gift. They get to share in the joy our characters experience when they receive surprises from the Pikwik Pack. The thrill of guessing and then revealing what’s being delivered is an experience we can all appreciate and share together. In each episode of Pikwik Pack, kids experience this joy firsthand. It’s like a special holiday or a birthday every day.

Pikwik Pack’s unique message of working together to serve a tight-knit community has also become increasingly relevant and timely. Around the world, delivery workers are now being celebrated along with front line workers for the essential services they provide for our communities.

We’re also seeing from testing and early feedback that Pikwik Pack is very much a gender-inclusive show. The loveable animal characters and charming stories are really resonating with both boys and girls.

> What was the inspiration behind this series? Can you throw some light on the process from ideation to execution, including the animation process?

We always wanted to create a world where unique animal characters with individual personalities would be part of an amazing, colorful community and delivering what we call “heart wishes” would be a great way to connect the team with the place they live.  Then came the idea that each episode would feature a new surprise package to deliver, and that kids at home wouldn’t know what’s inside until the very end of an episode.

The development process was all done in house at Guru, led by our Creative Development VP of and co-creator of the series, Rachel Marcus. We brought the series to Disney Junior and they immediately fell in love with the show’s adorable cast and colourful world. 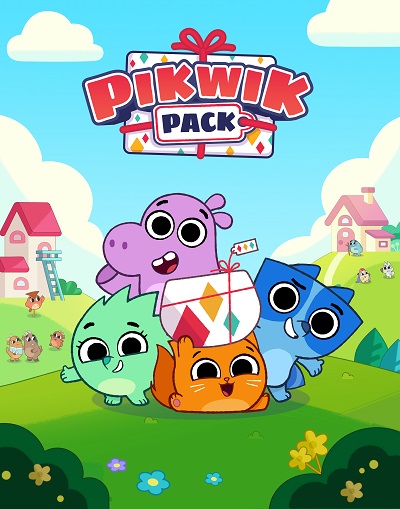 > Tell us about the animation team that has worked on the series.

We’ve put together some of our best writers, directors, designers, storyboard artists, and animators on this show. It’s an amazing crew. The stories for this series are hatched among the creators and our creative brain trust working closely with our writing team. We really wanted to ensure that the ideas lent themselves well to funny moments of physical comedy and that the messages were heartfelt and clear. The team at Disney was incredibly supportive of our goals and provided great guidance, which allowed us to tell the very best stories possible.

> In addition to the coming episodes, what else is in store for Pikwik Pack, such as licensing, international distribution, and more?

We have an incredible group of partners developing products we think kids will really love. Playmates Toys is our master toy partner, bringing to life the show’s energy and charm in a really exciting line of toys and plush.

We’re also thrilled to be working with Scholastic on storybooks and fun activity books. These are best-in-class licensing partners who have fully committed to providing our audience with meaningful touchpoints for these characters, the world they live in and the stories we tell. There will be more exciting announcements in the future as new licensing partners come aboard.

Outside the US, the show is launching on top tier broadcasters like Treehouse in Canada, Super RTL in Germany, Canal Panda in Portugal, HOP in Israel, Minimini+ in Poland, and more soon to be announced.

> Were any of the episodes created remotely due to the pandemic, and how did the team navigate those challenges?

Our teams have all had to pivot due to the pandemic and many episodes were produced remotely. Our incredible IT, Tech and Operations teams have been integral to keeping this show, and all our shows, right on track, getting everyone set up and even shipping workstations to nearly 100 artists.

By using a combination of virtual desktops, video calls and creative collaboration tools, our artists are able to connect to the studio, and more importantly, to each other while staying safe at home. While the physical isolation is challenging, we’ve navigated it by working together and caring for one another and like the Pikwik Pack…we’ve been delivering on time, rain or shine!

> When will the Pikwik Pack be available for viewing in India?

Pikwik Pack will be coming to India on Disney Junior later next year.