Disney Channel‘s popular stars Phineas and Ferb made a special visit to the Taj Mahal in Agra as part of their first ever visit to India. Here on a special tour to meet with their fans in India and to promote their upcoming Disney Channel Original Movie, Phineas and Ferb: Across the 2nd dimension, the ever curious brothers were seen admiring the iconic architectural masterpiece. 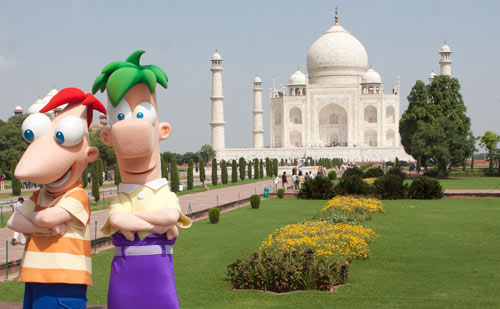 Prior to this, Brothers Phineas and Ferb were seen admiring Mumbai‘s iconic landmark, the “Gateway of India” in their first ever public appearance in Asia-Pacific.

Everybody loves “Phineas and Ferb,” the global hit for kids and families and the popularity of this animated comedy has reached another pinnacle with the new TV movie inspired by the series. Brothers Phineas and Ferb are visiting India to promote the movie and arrived in Agra after attending a star-studded premiere of their movie yesterday in Mumbai along with bevy of their celebrity friends from Disney Channel the No. 1 Television destination for kids and families. They will also travel to Delhi and Chennai for meet and greets with their fans gearing up to the on-air premiere of their movie slated for SUNDAY,SEPTEMBER 25 at 10 am.

“We are delighted to bring kids and families the Disney Channel Original Movie Phineas and Ferb: Across the 2nd dimension. It is an action packed adventure full of fun, mystery, humour and is a wonderful example of Disney‘s storytelling expertise,originality and creativity”, said Natasha Malhotra, Vice President and General Manager, Walt Disney Television International India. She added, “With the special screenings coupled with Phineas and Ferb‘s first ever visit to India to promote their movie, we look forward to taking the excitement to, quite literally, a whole new dimension!”

Phineas and Ferb: Across the 2nd Dimension is an adventure caper, where Phineas and Ferb finally discover that their pet platypus, Perry, is a secret agent, ‘Agent P‘, who battles the forces of evil almost every day. The boys team up with Perry on an adventure through a parallel universe where they must ultimately thwart the disastrous plans of a threat bigger than the dim-witted Dr. Doofenshmirtz: a parallel Doofenshmirtz, who, unlike his counterpart, is truly an evil genius with no goofy side or soft spot.

In the United States, Phineas and Ferb The Movie: Across the 2nd Dimension holds the record of 2011‘s No. 1 entertainment cable telecast and also ranks as basic cable‘s most-watched animated telecast ever among kids 2-11; The movie is also cable‘s No.5 movie ever in total viewers across the United States.

Fun Facts about Phineas and Ferb: