Space Jam sequel production has wrapped up, and the movie’s lead star LeBron James took the opportunity to give an inspiring speech to his fellow cast and crew, opening up about his childhood and journey to where he is now. Along with that the new Tune Squad jerseys for Space Jam: A New Legacy have also been revealed.

LeBron James finished shooting back in September, and since March the animators are busy adding in the performances of his costars Bugs, Daffy and the rest of the Looney Tunes.

“I’m gonna be honest completely with you guys – when I found out about the project, I was like it’s Space Jam! It’s a movie that I grew up watching. People in the movie that I idolise. I was like absolutely, I gotta do it. There’s no way I can turn down Space Jam!” James said.

Despite his excitement for the project, James says he knows he’s not “really supposed to be here” with such great opportunities. “I’m just a small kid from Akron, Ohio – a very small town outside of Cleveland. From a single-parent household, I’m the only child, my mother had absolutely nothing.She was walking around high school when she was 16 years old and she was pregnant with me as a high school sophomore. So, I’m really not supposed to be here,” he told the cast and crew.

One of the only similarities between the new and original jerseys is the use of the Looney Tunes logo’s background symbol. A New Legacy makes this a bigger part of the jersey design but has it wrap around the side of the jersey instead of being right on the chest.

Would it be the Family Reunion without a special surprise?! @mavcarter gives our I Promise families the first ever look at @KingJames in his @spacejammovie ‘A New Legacy’ jersey! ?? pic.twitter.com/XsPYL1dvcU

Warner Bros. has yet to begin Space Jam: A New Legacy‘s marketing push, but that could start to change with the jersey reveal. The movie previously received a July 2021 release date, and WB has not delayed the sequel yet, even after coronavirus forced multiple titles to be pushed.

Space Jam part one,  has become a sort of nostalgic, cultural phenomenon with the inclusion of impressive technology of that time.

Much like 1988’s Who Framed Roger Rabbit, where animation supervisor Richard Williams and ILM optical supervisor Ken Ralston combined live-action and animated footage, Space Jam took Roger Rabbit’s lead, and then went much further. Roger Rabbit was a monumental achievement in the pre-digital era, and Space Jam was its heir apparent. 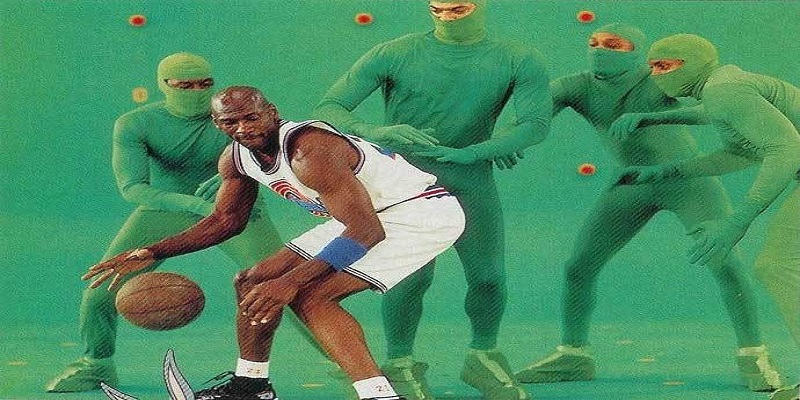 Visual effects supervisor Ed Jones (who also earned an Academy Award for Roger Rabbit) and the digital crew of Cinesite completed shots for Space Jam that averaged 30 elements per composite.

Space Jam could not have been made five years ago because the technology had not yet been created that could capture Pytka’s free-moving camera style. In the past, Jordan’s movements would have been choreographed with absolute precision and filmed with a “locked down” motion control camera. The technique involves a groundbreaking motion-tracking process in which a background environment is created, put in place, and moves as the camera does, following the action of the players…and the entire sequence is orchestrated in the computer.

Therefore it is expected that the sequel will include even more visual effects techniques and technologies which will furthermore enhance the visual experience of a sports movies in 2021.

Plot details for the movie is yet to be released, but it is known that LeBron and the Looney Tunes will have to team-up at some point. Based on the amount of NBA and WNBA stars confirmed to appear, this will involve another game of basketball, and now the Tune Squad’s new jerseys have been revealed.