Disney+ has dropped the trailer and new poster for the second season of its Emmy-nominated series, The Mandalorian.

The highly-anticipated series of the Star Wars saga, the new trailer features the Mandalorian, the Child (Baby Yoda) and the wild. Mando and Baby Yoda arrive on a snowy planet to embark on a sea voyage. The Mandalorian is also advised to return The Child to any surviving Jedi outcasts – “You expect me to search the galaxy and return this creature to a race of enemy sorcerers?” – he asks. “This is the way,” – a voice answers. 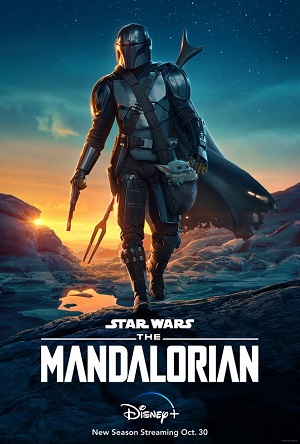 There’s already a lot of hype around the trailer, and in addition, WWE’s Sasha Banks also makes an appearance. Her mysterious cameo in the 52-second clip, shows her in aJedi-esque black robe, though her hooded character’s identity is yet to be known. The Armorer or mysterious Banks says the words, “This is the way,” halfway through the trailer.

The sophomore season continues the adventures of a lone bounty hunter played by Pedro Pascal and Baby Yoda as they try to be a step ahead of the villainous Moff Gideon, played by Giancarlo Esposito.

The Mandalorian season two completed filming at the beginning of March, right before the industry-wide shutdown, then completed its post-production process using social distancing measures. The project is undoubtedly the fall’s biggest and eagerly awaited series owing to the pandemic.

Jon Favreau is the showrunner along with executive producer and director Dave Filoni. The Mandalorian season two releases on 30 October.