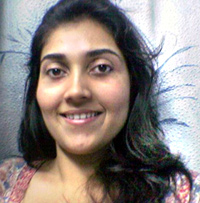 “Observation is the first key to any kind of creativity”

Ever noticed the many colors that a drop of grease forms on the surface of a rain water puddle? The next time it rains and you spot someone staring at the puddles it probably could be Apna Artist Megha Thakar.

Completely fascinated by colors, Full of zest for life and always keen on learning more Megha currently works as a texture artist at Prana Studios.

Following are excerpts from a conversation that Animation â€?xpress Prachi Shinde had with Meghaâ€¦

When did you get first get interested in animation?
Be it animators, scientists or journalists, the curiosity quotient is something that drives people to the next level. Interestingly, this fundamental quality is abundant in children and the same was the case with me.

As a kid I was extremely curious about everything. I wanted to know how things that I observed around me worked. I was always intrigued â€¦How could one make cartoons out of drawings? Are people sitting inside the TV?

That early curiosity was the first time that I got interested in knowing more about animation.

When did you take up animation as a career?
In animation, the earlier you begin the better. Luckily for me as I mentioned earlier, I always had an inclination towards art and it was amongst my favorite subjects at school. Right after class TEN, I did a Dual Diploma from Arena Multimedia and immediately joined a web solutions company as a visualiser. I soon became a Flash animation enthusiast and pursued the medium aggressively.

My destiny in animation next played its hand by me getting a golden opportunity to work at Famous studios, renowned as one of the best studios in the country. â€?Famousâ€™ had an edge when it came to creating TVCs.

I got a chance to be a part of the team working on the POGA commercial for MTV which was designed and directed by Cyrus and Vaibhav. Later in 2004 I joined Crest as a matte painter.

While at Crest, I upgraded my skills and learnt software like Maya. I always like to keep evolving in my art and interestingly even if I observe my career graph, though I began as a web designer, I soon graduated into a flash animator, got into matte painting and am currently a Maya Texturing artist. Learning is something which begins in the cradle and ends only in the grave and I want to constantly keep learning.

What qualities should a texture artist have?
Observation is the first key to any kind of creativity.

When you are texturing something, you have to start off by asking yourself a few questions â€“ what is this object used for? Where is it found? How do people interact with it? If you wish to become a brilliant texturing artist, the first thing you are going to have to do is learn how to properly observe surfaces in the world around you.

You need to look at things and, in your mind, break the surface apart into it’s different properties. Patience is yet another quality which one has to have in order to be able to achieve that level of quality.

Technically, Adobe Photoshop is a must as well as Maya they both go hand in hand!

Do you make most of you textures or use ready ones?
It depends on the kind of texture one is doing. If it is realistic work than you need to use hi resolution digital images of about 5 Mega Pixels to 8K. Another approach is to paint into the textures using images as reference.

What is the best part about texturing?
Texturing is giving an object its identity. It defines Color, Age, Usability, material, the essence of its Environment etc.

It brings an element of believability to objects, characters, backgrounds.

When one creates a model, say for instance a 3 Dimensional cube, at the modeling and shading stage, the cube is simply grey in color. When the texture artist adds on the texture, that same cube gets the identity of a stone, crystal, sugar cube, wooden toy etcâ€¦. the process is fun, the process of making things look complex and rich is in fact simple for those who practice it daily.

What is the difference between textures and materials?
A Texture is a base substance of a surface, For example wood, metal and glass are examples of materials. Material is the adjective to the texture,something that describes the qualities of the texture, like soiled cloth,polished marble, rough tree bark etc.

What is the difference between a shader and a texture?
A texture is a 2D image, a shader is a group of functions or a program that actually tells the renderer how to draw the surface. A shader may or may not use textures. A texture pretty much always requires a shader of some sort.

How would you define motion graphics?
Motion graphic design has been considered a speciality skill, usually handled by artists that concentrate on designing for television broadcast or films. It is defined as designed non-narrative, non-figurative based visuals that change over time.

Motion graphics donâ€™t actually have to move, as long as they change in some way over time. For example, if type is on screen over an image, the letters may not actually move, but could gradually change colors.

Here is an image for better understanding

A typical example of motion graphics. Pictured are 5 individual frames from a 20 second video. Diagram by Frantz.

What inspired you to make annihilation?
My work â€?Annihilationâ€™ can be called a motion graphic image. The effective colors and the kind of strokes balance in the whole image defining the mood of the art work. Lot of online designs are examples of motion graphics. One of the websites which I personally like is www.xeofreestyle.com.

Where did you get the inspiration to make floral dreams. Can you tell something about the making ?
The flower in floral dreams makes it look pleasant and clean. The womanâ€™s eyes speak a lot of positive thoughts. And thatâ€™s how I thought of naming it as floral dreams to show a person with a pure and beautiful heart.

Is â€?Thoughtsâ€™ a hand made one? What do you want to convey through it?
Yes thoughts is hand made work. I used water colors and crayons then I scanned it and made changes in Photoshop in terms of color contrast levels. This gave it a sharper and fresher look.

What sort of a work environment do you expect as an artist
I would always like my work pace to be colorful, or having some kind of themes. I love it if people around me are cheerful, fun loving and the same time focused on their work. If not this, then I would love to be with all kinds of artist books in a library with a cup of coffee and my work.

What are your hobbies and interests and how do u manage to fulfill them with a busy schedule
I love watching movies, Bowling, Playing Table Tennis, Volley ball and Driving. I like to read faces a lot. I manage to grab a Movie on Sundays and than go on outing with friends. I am a Sporty person. I make it a point to go for a drive everyday after my dinner, its relaxing. One needs to find time for oneself or thereâ€™s a danger of being stressed out for no reason at all.

What are your goals at this point of time?
My aim right now is to make my short film. I also want to create a medium for people to showcase their short films. e. I think it will make the roots stronger for an Indian artist. Besides I want a small studio like place where I can have my camera, my laptop, all kinds of books to refer to. Basically I want liberty to work my way.

Your comments on the field of animation
Animation has grown so drastically since last few years that is has actually changed the way people perceive it. People have started considering it as a full time career now. I am proud to be a part of it.

Is there anything that you will like to tell everyone
Just a phrase â€?A Winner never Quits and Quitter never Winsâ€?.