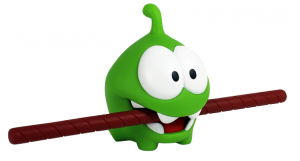 Starting this summer and continuing through to October 2014, the promotion will run in 37 markets across Europe and will feature a new and exclusive app, ‘Cut the Rope: Hungry for Fruit’, which is available on McDonald’s Happy Studio on the iOS and Android platforms. The game, which has been developed especially for the promotion, features new arcade gameplay, which is fun and challenging at the same time. The goal of the game is to get the world’s most adorable, candy eating monster Om Nom a steady diet of fruit by popping floating bubbles that contain the fruit or Om Nom himself. During the promotion, every Happy Meal purchase will come with one of eight Om Nom fruit themed toy premiums.

Store window takeovers, fruit sampling, fun fruit recipe cards and premium demos are among the activations that will support the new Cut the Rope game for the duration of the promotion.

Trudi Hayward, senior VP, Global Head of Merchandise at ITVS GE says, “This multi-territory partnership with McDonald’s Europe demonstrates the calibre of major promotional partners that Cut the Rope is now attracting on a global scale. A 360-degree entertainment franchise with a presence that extends across digital games, broadcast, consumer products, promotions and social media, Cut the Rope is perfectly placed to provide the kind of engaging and interactive experiences, in the real world and the digital space that kids today are looking for.”

The Cut the Rope apps, created by Zeptolab and featuring the candy crunching Om Nom, have been downloaded over a half a billion times worldwide, and the franchise is proving distinct from other mobile game brands with its longevity, successful evolution across multiple platforms and steady, global growth. In addition to the apps, Cut the Rope has spawned a series of TV shorts with over 125 million views on YouTube alone, a series of comics, an Activision game for Nintendo DS, and a growing collection of consumer products from more than 50 European licensees. ITVS GE holds the pan-European licensing rights for Cut the Rope and current partners include Vivid for collectible Nommies, playsets and plush; Activision and London Watches. The first three seasons of the Cut the Rope animated series, Om Nom Stories has migrated from its online origins, YouTube to broadcast networks such as CiTV (UK), Gulli (France), and Clan TV (Spain). Additional episodes are currently in the pipeline.