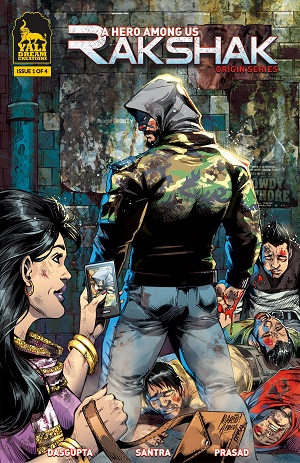 Superheroes/heroines have always saved the world…and also the box-office! Quite literally! Be it Hollywood or Bollywood, there’s no dearth of superheroes as the audience simply can’t get over them or the concept of an extraordinary person taking on the wrong.

Srivatsangam had a dream of creating and sharing stories in some media or the other. He came from a family of academic high achievers. His paternal grandfather was a lawyer from Paramakudi, Tamil Nadu, India. His father, Dr. Srivatsangam, was a scientist, who got his PhD from Fort Collins, Colorado, and worked for NASA. He has relations with the superstar and legendary actor, Dr. Kamal Haasan, who happens to be his father’s second cousin.

AnimationXpress was pleased to have a chat with this creative mind:

1. Tell us about yourself and your journey with Yali Dream Creations and its inception?

My early childhood was much enriched by cartoons, later by Indian mythological stories. While years of corporate life suspended this possibility, he kept weaving stories until one day he decided to start his own comic book company. I had always liked story-telling and exploiting visual medium such as graphic novels fascinated him even further.

I am based in San Jose, California and work as a UI/UX designer in the tech industry. However, I always wanted to do something with comics and storytelling. I began by creating two graphic novels, The Dynast and Neelakshi: The Quest for Amrit. The biggest pain point for me was to find a publisher. That is where it dawned on me to start a publishing house. It was Yali Dream Creations, which was started by me in August 2012. Our first graphic novel was The Caravan, which was the brainchild of writer, Shamik Dasgupta. This was released in June 2012 at Bangalore Comic-Con. Since then, we have published prequels for The Caravan, Devi Chaudhurani, Rakshak Origin series and then The Village. It has been a journey of over seven years now.

2. What is the significance of the name Yali Dream Creations?

The name ‘Yali’ was inspired from the Hindu mythology. Unknown story of Hindu Mythical animal – Yali (யாளி) Hindus mythical animal or monster Yali can be found in Hindu temples as an ancient art. It has been widely used in South Indian temples pillars. Part of Lion and Elephant as a body and head. These type of ancient mythical animals can be found in various parts of the world and religions.

Yali Dream Creations is a comic company focused on creating original stories to engage global audiences using comics and graphic novels. It brings original and imaginative stories with an admixture of horror and fantasy; mind-bending sci-fi and mythology. We nurture and enlighten the next generation to leap onto the comic book scenario through our gripping stories and eye-popping art-work. Our team, from the very creative artists to the exceptionally talented writers, have the same agenda: unfolding great stories.

3. How do you feel that Rakshak is now going to be adapted into a feature film?

Elated! That’s exactly how I feel! Of course, this is just the beginning. And director Gupta is the right person to helm a content like this. We, Yali Dream Creations are absolutely thrilled.

Having spent days, weeks, months creating a comic book series of 350 plus pages in four issues, and then talking to the stakeholders and collaborators for so many days, this is a truly fulfilling moment for me. Initially, my writer, Shamik Dasgupta, had titled this series Dansh. Though it was related to the story, the name did not sound very appealing. We brainstormed for several names after that. I came up with the name Rakshak, which is pan-Indian. After much debate, we felt it was the aptest and the most appealing name we could come up for this vigilante story. Thus it is Rakshak.

4. As the publisher and co-producer of Rakshak, where do you think Indian graphic novels or superheroes stand to be made into films? How do you find that market?

While DC and Marvel comics and their screen adaptations are heavily consumed in India not only in English but also in Indian languages, it’s the right time for an indigenous comic book character to appear on film. Hopefully, Rakshak will pave a way for a new beginning for Indian comics. And create a new trend in Indian cinema! 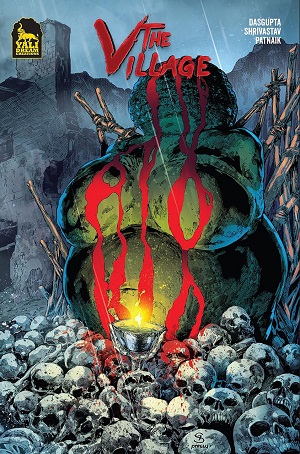 5. Tell us more about ‘The Village’, that’s going to become a series on a global OTT platform?

One of our other graphic novel properties, The Village, has been optioned to a global streaming platform. So-and-so, a person who has worked with the legendary director Mani Ratnam, is going to direct the project. It is going to be made in Tamil, and the production will begin in August 2020.

6. What’s your vision? How are the finances looking?

Our vision is simple. We want to create good content in the form of comic books, and in that form, we have a visual screenplay ready for the consumption of filmmakers and studios. I think the bulk of our revenue would be generated from screen adaptation. Thanks to the OTT platforms of today, a story doesn’t have to be told only in the 150-minute format and to have a theatrical release. In other words, we have a wider market and reach than ever before.

As for the revenue coming directly from the comics, it has been modest. I think it would continue to be so for some time, as comic book readership is rather niche in India, and relatively new.

We are also looking to license our properties with gaming companies, since there is a huge market for mobile gaming. Also, we do not want to limit ourselves and stay a  mere comic book company. To empower ourselves, we have started a production house that would facilitate us in the conversion of our comics to screen adaptation.

7. What are the current and upcoming projects from Yali Dreams Creation?