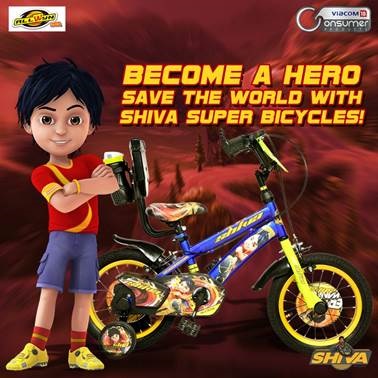 Almost no child can resist the excitement of gong outdoors and pedal through the streets. As a favourite pastime and a significant routine for children, cycling defines the essence of one’s childhood. Keeping up with the fascination and adding a dash of excitement to it, Viacom18 Consumer Products is all set to launch a new range of Shiva Cycles in association with Allwyn Bikes- based on the popular Nicktoon, Shiva.

The newly launched Shiva cycles with distinctive and attractive styles are available for kids across age groups from three to nine years. It has 3 segments – Bicycle, Tricycle and Kick Scooter. Bicycle range has three sizes available – 14T, 16T, 20T.

Symbolising strength, bravery and intelligence, the homegrown character of the Nickelodeon franchise- Shiva, resonates with kids and his flying bicycle is one of the major attractions amongst the young minds. With this new offering, cycling will become more enjoyable for them.

Commenting on the launch of the new range of Shiva Cycles, Viacom18 Consumer Products business head Sachin Puntambekar said, “Shiva is one of the most popular characters from the Nickelodeon ecosystem, and Allwyn Bikes is known for their unique range with outstanding features. The launch of Shiva Cycles is an extension of the fan-base and a give-back to the kids who adore this fun-loving character. As one of the most essential elements in a child’s development, cycling also remains to be an integral part of their play routine. The diverse range of newly launched cycles cater to all age groups and will offer sheer delight to the little Shiva fans, bringing them closer to their favorite toon.”

The launched Shiva Cycles are available in stores across the country.