3D Animation Animation Latest News
2019 is going to be an important year for India mostly because of the Loksabha Elections. The political scenario of India is fomenting up with every party taking pot-shots at each other. Even the news channels are not far behind, as we are witnessing quite a number of political cartoons or ‘politoons’ on few leading channels in the country. Though most of them are quite popular, So Shayari on India Today, with its latest episodes have been attracting eyeballs for some time now. The new episodes are smart, witty as well as funny and entertaining. So Shayari had its newest episode five days ago which like other episodes, takes a dig at noted politicians with a humorous undertone. AnimationXpress recently had a friendly chat with India Today creative director Paresh Mehta (fondly known as the ‘Father of Politoons’ in India) on the journey from So Sorry to So Shayari. Launched nine months ago, So Shayari has episodes ranging between 45 seconds to a minute.  A graduate of the National Institute of Design (NID), Ahmedabad, Mehta has been focusing on designing emphasising on solving any problem with aesthetic utility, for five and a half years now and thus, created and popularised the genre of politoons. Let’s hear it from the veteran himself : 1. What’s the inspiration behind So Shayari? With the advent of digitisation, iPads and cellphones, the platforms are changing which are quite different from old school still caricatures. They needed to be fluid, robust, and dynamic, something that I had explored in-depth with e-learning modules while doing a research paper at Purdue when I was a tenure-track professor there. Initially I took the concept of creating caricatures in 3D to the Times of India. They were unconvinced that this type of animation would work or be profitable. I hoped that they would change their perception but after a couple of months and receiving no positive decision, I started thinking about a new vertical: news-based animation. So then the problem was how to get news across the public in an interesting and dynamic way, across language barriers and age groups  and ‘politoons’ was the answer. This genre were pioneered as a means of communicating news and political developments to everyone. The vision came from India Today former editor-in-chief and former chief executive Aroon Purie who had the courage and insight to take a chance on this revolutionary concept, and the rest is history. So Sorry as a brand became instantly visible and has sustained itself for the last five years. So Shayari as a concept was the brainchild of Kalli Purie, Aroon Purie’s daughter. It came about as we were discussing how to take So Sorry to the next level with shorter, more direct, forceful and compelling animation.

2. Can you elaborate a little on the process of making the animation? What are the formats and the techniques you’ve used? It is a complicated process requiring a large team and comprised of many components all of which have to synergise efficiently to create a politoon in a very short time. The creative aspect is given good time from visualisation to production. The research, political expertise and conceptualisation all have to come together quickly in order to be translated into animation. As they say “News and fish stink in three days”, the team compromises of exceptionally talented animators who innovate and create quality animation for the episodes. The technical process is the same that every studio follows. The usual Maya standards. We follow the same pipeline as animation rendering, lighting, texture wrapping, as u have different units. We take special care on creative interpretation of the character design. We are very particular about that and also about the message that has to be factual, genuine and not conceived in fancies. Technically, there should be a certain possibility on the fluidity of animation which should be convincing and we show it to a group of eight to 10 people. If the team thinks that the message is delivered, then it’s good to go as it has to be communicating and should reach out to the masses. 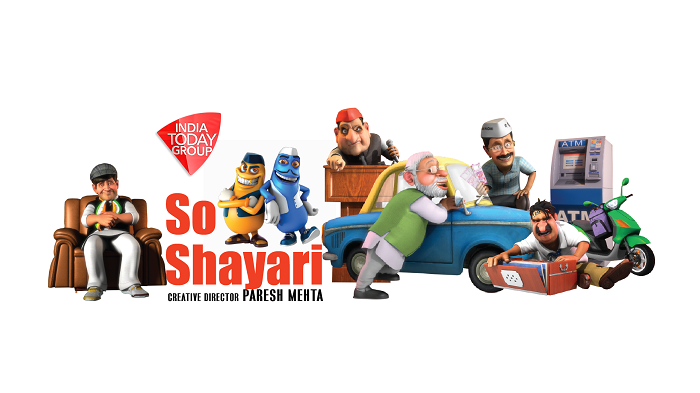 3. Any challenges you faced while making the animated characters based on the films? The marriage of computer skills with artistry is paramount when creating characters. Some characters lend themselves to animation while others do not. The more challenging aspects were capturing the essence of the character. I strongly feel animation should be taken seriously as an industry in India. Not where makeshift animation academies teach mostly on computer skills with teachers having no experience of the industry whatsoever. 4. How was the journey from script to screen? It is a long and tedious process, with turnaround time being so short there is no turning back. So you have to persist. There is a dialogue from the movie Rocket Singh, (might not translate well), but it says “jab office ka desk becomes your bed” then you are able to make an organisation or a product. 5. How did you come up with the title So Shayari?

So Sorry was silent animation and we wanted a change from the Charlie Chaplin slapstick humour to more dialogue based animation. On the other hand, So Shayari being the essence of Indian tradition, we thought would marry well with animation and thus it was born. Kalli Purie coined the name So Shayari.

6. How did the idea of ‘Politoons’ occurr to you? I have always felt that animation plays a very integral role in making learning simpler. What salt is to popcorn, animation is to learning. One day on my iPad while admiring the caricatures of Ajit Ninan, I wondered why they should remain still caricatures, and not be made more dynamic, maybe animated in films. As a filmmaker, I wanted desperately to animate them. Now the problem lay in the quickest turnaround time while keeping the cost low. What turned out, is something I am very glad of after five years it has become a sort of art form which every news channel is trying to adapt to and create as well. 7. How does it feel to be termed as the ‘father of Politoons’ in India? Thank You. I just feel honoured about it. 8. Has it been difficult for you to execute these toons given the political scenario that has curbed voices in the past? Well, when you have a man like Aroon Purie behind you as a captain of the ship it definitely becomes much easier. When we launched the first series we were pleasantly surprised as to how well it was received. As long as we keep them the politoons dignified and editorially correct, I think it is acceptable. 9. Do you think animation as a vertical is more effective than others in these sensitive issues? Animation is culturally agnostic and one that we can enjoy without being biased. A Tom and Jerry or Toy Story, all kids anywhere and everywhere can enjoy regardless. Animation is neither limited nor defined by race, language, or religion. A picture is worth a thousand words concept but magnified a million times. 10. What are your current and upcoming projects? We have launched a new channel called Kids Tak, which will have entertainment and learning content  for children. An animated TV series called Golden Island, full of adventure and comedy conceived by my colleague’s Sudanshu Rastogi, Rahul Sharma, Sandeep Singh Sidhu and myself which is going to go in production soon. Also Detective Moochwaala that is in the pipeline. Politoons as a genre looks very promising to take the animation industry in the country to a different height garnering love and affection from the masses.