Paytm First Games has announced the launch of the Clash Royale Championship in India. It is a year-long event that will have four tournaments, and gamers will compete to win a prize pool of Rs.10 lakhs along with vouchers of leading brands. This championship will be much bigger on scale and participation, compared to the previously organised tournament and the company is expecting a 4x increase in registrations this time.

The first leg of this championship will be held from 24 May to 26 July. Gaming enthusiasts across the country can register for this tournament on Paytm First Games app. The other three tournaments is slated to take place between August and March next year. 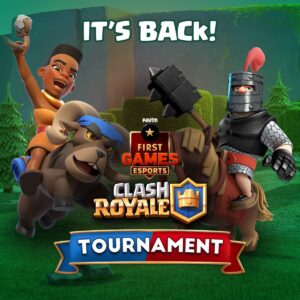 Clash Royale is a real-time multiplayer game and one of the world’s top-grossing mobile games. This tournament will be played in a 1 vs 1 format where an individual player will compete with other gamers. It will be organised in an online and multiple elimination formats depending upon the round. It will also feature all the top Clash Royale players in India including the winners of the previous season.

The previously organised Paytm First Games’ Clash Royale tournament was the biggest one in India in terms of participation and prize money. The company had originally planned to host the tournament with only 512 players but owing to the overwhelming response, it extended the registrations and eventually received over 11,000 participation requests. The finals were live-streamed on Paytm First Games Esports Youtube channel and were watched by over 70,000 users. The total viewing time of the finals by all the viewers equaled more than 1800 hours of viewing time.

Paytm First Games COO Sudhanshu Gupta said, “We kick started our esports journey with a standalone Clash Royale tournament last month. Owing to the encouraging response we have decided to roll out a year-long championship series which will give Clash Royale fans ample opportunities to compete in four tournaments across the year. We are also expanding the format to add more games in the eliminator leg to give players a more even chance to compete. The finals will be live-streamed again on Paytm First Games app, Paytm Inbox, and our YouTube channel.”

Paytm First Games has partnered with other international gaming giants including ESPL and Garena to bring globally popular esports tournaments to India. The online gaming platform offers 300 popular games including Rummy, Ludo, Three Cards, Bubble Shooter, 8 Ball Pool, Fantasy Football, and Bike Racing to its users. The app registers more than half a million daily active gamers on the platform, spending anywhere between 32 to 45 minutes. In addition to this, the company offers rewards and gratification worth more than Rs.10 crores to its users every month.