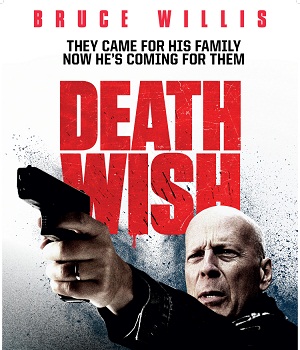 Die Hard star Bruce Willis is back to flexing his muscles in action flick titled Death Wish. Metro-Goldwyn-Meyer (MGM) picture’s presents the re-imagining of the 1974 movie, which had a similar plot.

Since the release of the second trailer, a teaser poster has been revealed that geared up the arrival of the main protagonist Dr. Paul Kersey (Bruce Willis), who is out for revenge against the people who assaulted his family.

Here’s a synopsis of the movie: Dr. Paul Kersey is an experienced trauma surgeon, a man who has spent his life saving the lives of people on the verge of death. But when his wife is killed and his daughter rendered comatose after a brutal home invasion, Kersey uses his unique skills to become the vigilante killer nicknamed “The Grim Reaper.”

As Willis goes all guns blazing in this revenge saga, the fans can smell blood in the water with the release fast approaching.

Death Wish is directed by Eli Roth and is slated to hit the screens in English, Hindi and Tamil on 9 March 2018.