At the D23 Expo, teaser trailer was revealed of Captain America: Civil War where Iron Man, Scarlet Witch, The Vision, Hawkeye and Ant-Man were seen. Chris Evans and Anthony Mackie had flown down from Germany to attend the event and now finally they have wrapped up the production and celebrated it at a German pub. Stars Chris Evans (Captain America), Scarlett Johansson (Black Widow), Anthony Mackie (Falcon), Chadwick Boseman (Black Panther), Sebastian Stan (The Winter Soldier) and others headed to a local tavern Leipzig’s Imperrii Bar and Lounge to celebrate. Marvel co-president Louis D’Esposito also tweeted confirmation of the production wrapping up. 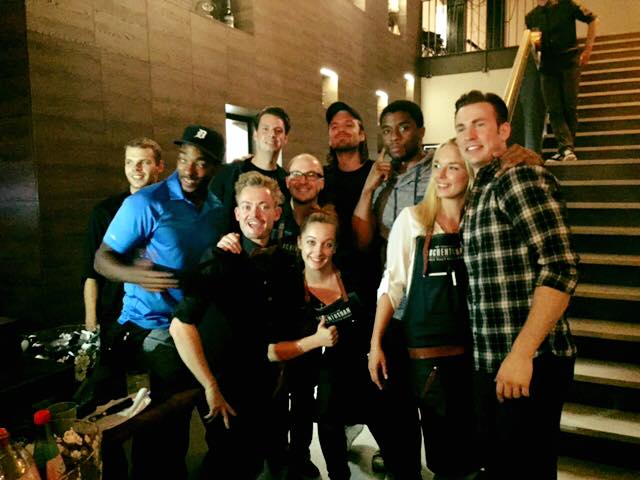 Captain America: Civil War is the final sequel to the Captain America trilogy and picks up where Avengers: Age of Ultron was left off. We will get to see a rift between the Avenger members and they will have to choose sides between Captain America and Iron Man. Recently comicbook.com reported that actor Jeremy Renner confirmed that he will be siding with Captain America. “I don’t know; they wrote me in that side,” he said, “It made sense to me”.

As for X-Men: Apocalypse which started its shoot in April in Montreal under the direction of Bryan Singer wrapped its first unit filming. The second unit production will continue for another few weeks. But for now, the crew celebrated wrapping up filming, according to a follow up post on Instagram. We will get to see Rose Byrne as Moira MacTaggert, Lucas Till as Havok, Evan Peters as Quicksilver and newcomers Alexandra Shipp as Storm, Sophie Turner as Jean Grey, Ben Hardy as Angel, Tye Sheridan as Cyclops, Olivia Munn as Psylocke and Lana Condor as Jubilee. Oscar Isaac is starring as the film’s title antagonist.

The film is the final part of the trilogy series of First Class and X-Men Days of Future Past. The film deals with the concept of ancient mutanism, gods and men. It deals with issues that are global. Apocalypse makes no distinction between humans and mutants, only between the weak and the strong.