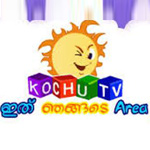 Kochu TV, Sun TV Network’s kids’ entertainment channel in Malayalam launched arguably, the biggest interactive game show on Indian television, ‘Run Singoo’ on 23 August. This live interactive show based on the sensational technology of motion capture control, is a path-breaking concept in Indian television turf.  Integrating this state of the art know-how, into a television game show will bring gaming into the homes of each and every Kochu TV audience.  Fun with gaming will no more be an expensive affair for children. This technology brings to life the much-adored channel mascot, Singoo who would be hosting the show.

The only prerequisite to participate in the show is presence of a phone line. This could either be a mobile phone or a landline. The biggest surprise is what takes the place of a joystick, which is nothing but the phone itself. The keypads on phone will serve as play buttons.

The story that revolves around this one-minute game show is that, Singoo is on a constant run trying to overcome a challenge. On the move, Singoo collects energy giving Boost biscuits strewn on its way. It is at this juncture that the audience gets to be a part of the show and by using their joystick; children can accelerate Singoo’s speed. 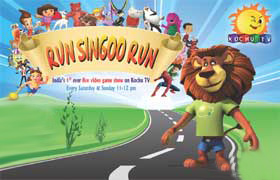 Creative components will add a new dimension to the show, which includes game interface featuring Kerala’s landmark and monumental places. A not to be missed feature will be the myriad wardrobe and hairstyle of Singoo ranging from traditional mundu to bespoke Suit, mohawk hairstyle, Chettan hair-do and many more.

A visibly excited cluster head for kids’ entertainment channels of the Sun Network, Kavitha Jaubin, considers this a landmark innovation in TV programming. “The wait and the anticipation is creating an aura of a ‘channel launch’,” quips Kavitha and she hopes this show will be a trend setting program taking television programming to a new level.

Run Singoo will be telecast on all weekends between 11:00 am and 12:00 pm live on the channel.