Ever wondered about how would an alien selfie look like? Or an Adam teaser?  Or an Alien Bengali-babu?  If not, then the official website or the Facebook page of illustrator Charbak Dipta is THE place to visit. After one has gone through them, one will find that his works are as unusual as his name and dressing sense.

Born to a Bengali family in Bongaon, a small town in West Bengal, Charbak Dipta has already become a name in the field of graphic story-telling and cartooning. He is well known for his independent illustrations, political satires and the much appreciated alien series, Indian Aliens and its sequel, International Aliens.

Besides being a fantastic graphic and comic artist, Dipta is also a trained Hindustani classical singer, guitarist and classical pianist. He took formal music training from ITC Sangeet Research Academy and Calcutta School of Music for over a decade. Started off with casual drawing just like kids in usual, he never thought of taking it as a profession because he wanted to pursue a career in music. 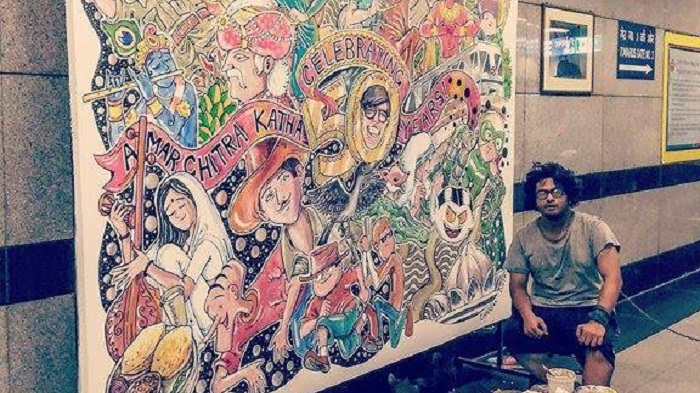 On being asked to elaborate about his journey as a self taught artist, he said, “I have been drawing right since my childhood. I don’t think art can be taught but comes from within. So I started from scratch, picked up inspiration from my surroundings. In school I used to doodle and scribble during recess but never thought of taking it seriously as a profession, because music was my forte then and art was just a mean of unwinding pleasure.”

In fact, he stopped drawing entirely for eight long years during his high school to university days and it was only after completing Masters in Philosophy from Jadavpur University and his internship with The Times of India (TOI), India’s largest selling newspaper that he thought to take up art as a profession.

“I got an opportunity to do an internship as a cartoonist with TOI and since then I never looked back. I went there as a novice and returned as an expert in print media, software, and learnt to manage deadlines. Later I moved to Delhi to become a full time artist. I think my style of artwork was hidden somewhere in my earlier works which I reinvented. I have been practicing it seriously since last five-six years,” he recalls.

Post the TOI period, a keen believer in anti-establishment, he decided to freelance, for he considers art, music, poetry as full time job that requires 24 hours dedication and diligence, and one has to be completely into it.

As an individual,Dipta likes to define himself as a combination of many persons into one. He tries to record his thoughts and perceptions of art, in the form of illustration expanding every illustration into a full length story and thus the title of a ‘graphic story teller’ fits him aptly. Once expanded one has turned out to be ZERO: Indian Aliens’ Adventure, his debut graphic novel.

Being told to elucidate on this adventure he said:

“I record the thoughts in concentrated form. The ones that are large and cannot be concentrated into a single work, I expand it. That’s why I write graphic poems. It is the marriage of poetry and comics- a new genre I started. Ideas which are large enough to express in a single illustration, yet not as large to be a graphic novel, so I place them in this graphic poem category that fits in two to four pages length.” 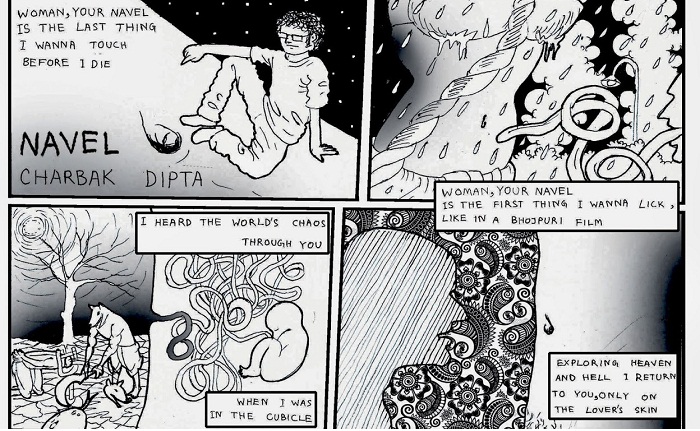 Dipta has a plethora of artistic works. Each one of them has its separate world and separate ideas, influenced by his studies of philosophy, world cinema, film theory and music. The latter, especially plays a big influence on him in generating ideas. Lately, his art exhibitions has taken him to a lot of places which also has enriched his thinking process helping him to imbibe the sights, sounds and cultures of different countries into his creations.

Another source of inspiration for him is his hometown Bongaon, a sleepy small town 80 km north of Kolkata near the Indo-Bangladesh border. Hailing from a Bengali family that has a rich cultural environment and has kept traditions alive, he seems to have creativity running in his veins. Even the house where he has grown up has impacted his drawing style hugely.

Apart from Philosophy, he has studied metaphysics, epistemology, logic, buddhism, Indian logic system, Greek philosophy, mind cognitive science and psychology that has helped him think rationally, break horizons and broaden imagination. A former professor, he then chose to defy norms and quit a stable job to pursue his passion in cartooning and illustrating.

But it’s always easier said (read chosen) than done. The path he was traversing was not a cakewalk as it had its own challenges. The first one was, convincing his parents from conventional background that he would like to make a living out of his illustrations and comics. Life is an adventure and at times it’s okay to break rules and chase your dream. And when one’s goals are clear, can success be far behind?

Every work of his derives from the frustration of what he couldn’t achieve in the previous one. He adopts new ideas and themes which remained unexplored till date and these have garnered him with mixed reviews and responses for his works from different parts of the world.

It was the same fate for Kaali, another piece of work where he experimented with Kaali, the Hindu Goddess, shown to land in Delhi as a representative of womanhood and drinking the blood of the rapists. Many people asked him to remove it since it demeaned Hinduism (just like Hussain did in his Saraswati) and might put him into trouble.

“Whenever I make a political cartoon, I have to mellow the sharpness of the pun or satire to be safe in this biggest democratic country of the world. Every other political and social cartoonist is alarmed these days or another Charlie Hebdo will take place.”

Besides that, another challenge he faces while making art, is the lack of time and choice of the perfect medium as there are innumerable ideas. He wants to explore water colour, but finds it hard and time taking. Recently he has discovered his flair in pastel and acrylic colours which he enjoys exploring.

Dipta’s works are mainly culture- specific. Though that showcases the authentic Bengali culture to the world, chances are high that it might act as a barrier to reach out to a larger audience. But he thinks that more it comes from one’s root, the more it will become universal. Thus as an artist he celebrates unique ‘Bengaliness’ and showcases it on a greater platform.

“Satyajit Ray, the man I look up to, did not follow western ideas as that path is much traveled .Whereas the world of Bengali culture, literature and music, remains untouched. In our country children are not being taught their vernacular language these days for which they are forgetting their roots If we, the youth don’t take it to the world, who will? It is OUR duty to reach the ideas of Lalon the philosopher, to the world, just like westerners reached the ideas of Dylan to us,” he asserts.

Dipta’s artwork is very unique to comics. He creates stunning illustrations taking various situations in consideration. Of all artworks, his best-applauded is The Alien series which is a juxtaposition of Indian culture, (especially Bengali culture) and the concept of Aliens, the thing he is curious about. Some of these pieces depict alien versions of famous people, others put aliens in place of humans in everyday situations, and some are inspired by pop culture.

On being asked to throw some light about the actual idea behind this ‘out-of-the-world’ concept, he said:

“In the University, I studied Plato whose theory of ideas attracted me. It says there are ideas of each thing that are real. The things we see, including ourselves are just the copies of these ideas. This theory influenced creating the alien series. I stay at Chittaranjan Park, the Bengali colony of Delhi and each year there are huge Durga Pujas in the locality. Once I imagined those non-resident Bengalis as aliens and thought what if they do the pujas.”

And thus was made The Alien Durga Puja- the first one of the Alien series. Posted online, it became an instant hit. Hence he thought of making it into a series and the rest is history.

During his adolescence, he read the literature that have shaped up his artistic acumen. From sci-fi of Arthur C Clerk, H G Wells, Isaac Asimov, Sir Arthur Conan Doyle to Satyajit Ray (Professor Shonku), Premendra Mitra, Anish Deb and the absurdity of nonsense literature of Lewis Carroll, Edward Lear and Sukumar Ray, are major inspirations to him.

Graphic poems, his new found love has kept him hooked. It is like a montage where images overlap and things crisscross each other. It is a dream of bizarre worlds with bent space and time and cannot be tied by some particular symbols or metaphors.He watches the world around him and cooks images inside his head where they get merged with his subconscious. These images when become ripe and struggles to come out, he brings them down onto the papers.

Dipta’s amazing style is also reminiscent of traditional wood-block prints with his own unique twists. When asked about his technicalities that go behind creating those amazing works he explained:

“My style of line drawing is an amalgam of Ligne Claire, Marcinelle, far eastern wood cut, Bengal school and my own innovation. There aren’t any unusual tools. If there is anything unusual in it at all, it is because of the way I use them, which I developed through practice. I work in mixed ways and most of the time it ends up with the best result. I use Pigma pen brush, or sometimes Black gel pens to do the drawing on A3 size papers and colour it on Photoshop. I also work on Wacom Bamboo pen tablet and wish to buy a Cintiq in future.”

These days, social media has enabled people to see more works which were otherwise locked inside the art galleries.

“The outlook has grown and that is very encouraging for artists. But in commercial art world, people don’t want path breaking concepts from the artist. They are keen in buying art that suits their furniture at home, which is pathetic. In India, we don’t have the art infrastructure like other countries. Here, the number of art galleries are too low and our graphic narrative publications cannot compete with that of Manga,” he concluded.

Apart from several other honorary medals in different parts in Bengal and Delhi, Charbak Dipta had been the mentor in the first Kolkata Comic Con arranged by the French and The German Embassy of Kolkata. He has also received an honorary residency by Kala Kriti Art Foundation in Hyderabad and did art-mentorship in BITS Pilani. But what makes him stand out in the crowd, is the domain he’s working on and taking the baton forward for future generations.