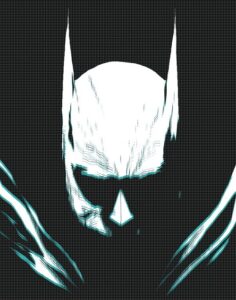 DC has released a first look at the follow-up to Joker: Killer Smile, written by Jeff Lemire and artist Andrea Sorrentino, Batman: The Smile Killer!

The first book was essentially about a psychotherapist who was (somewhat arrogantly) trying to treat and cure an imprisoned Joker. The psychotherapist was not able to do that, he was drawn into The Joker’s mania, violence ensured, and a pretty good comic book emerged.

The second story involves a young Bruce Wayne who has grown up watching a clown-centric show called The Mr. Smiles Show. DC is calling this an “epilogue [that] takes a different look at the Clown Prince of Crime, through the eyes of a young Bruce Wayne and his favorite cartoon television show.” .

Bruce Wayne grew up watching The Mr. Smiles Show – and the show might have been watching him back! And not only was young Bruce watching, he was listening… listening as Mr. Smiles spoke across the airwaves only to him… Lemire and Sorrentino land one last gut-punch to the mythos of the Batman, turning it on its head in the most devastating trick The Joker has ever devised!

The Batman: The Smile Killer goes on sale 23 June 2020. The book will feature DC’s Black Label content descriptor, appropriate for readers 17 and older.