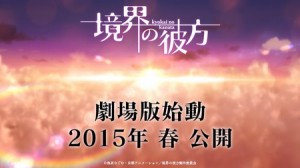 The official website for Kyoto Animation‘s Beyond the Boundary (Ky?kai no Kanata) anime series announced on Wednesday that the series will get an anime film in spring 2015. The same announcement was made in the seventh Blu-ray Disc volume of the television series as well.

The dark fantasy follows a high school second-year student named Akihito Kanbara (KENN). Although the boy appears human, he is half Y?mu and invulnerable to wounds because he can heal quickly. One day, Akihito meets first-year student Mirai Kuriyama (Risa Taneda) when it seems she is about to jump from the school rooftop. Mirai is isolated because of her ability to manipulate blood, which is unique even among the Under World Warriors. Disturbing events begin to unfold after Akihito saves Mirai.

The television anime premiered in Japan in October and Crunchyroll streamed the anime into several countries as it aired. Sentai Filmworks also announced in October that it licensed the anime for North America.