Animation Latest News
Bengal, Odisha and Bangladesh have been drastically affected by the cyclone Amphan (pronounced as ‘Um-Pun’). Kolkata has been devastated by this powerful cyclone which is said to be the deadliest after 1797 and has killed almost 84 people across India and Bangladesh. Amphan made a landfall on Wednesday, 20 May around afternoon lashing coastal areas with ferocious wind and rain. The storm, at 155-160 kmph has killed more than 70 people in Bengal alone and countless animals and birds, rendering thousands homeless. 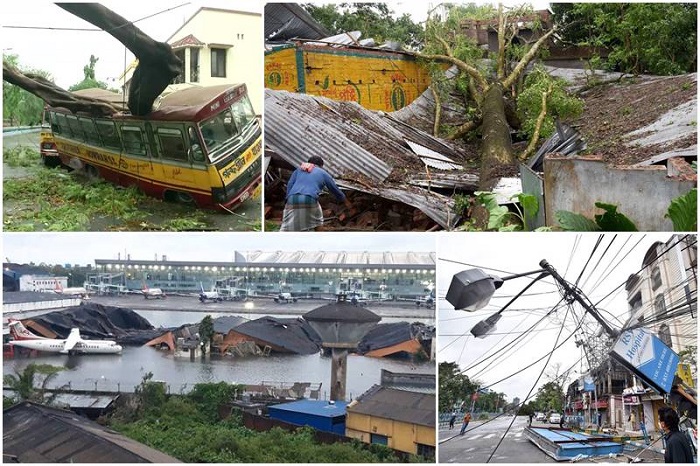 Thousands of trees were uprooted, houses damaged and broken,  electricity and telephone lines brought down with 14 million people without electricity and water till now. There were dead bodies floating in waterlogged areas who have been electrocuted to death. Sundarbans, the world’s largest delta and mangrove forest, has been terribly affected which contributes largely to the ecosystem. South and North 24 Parganas and East Midnapore were the worst hit areas. While there had been almost no coverage on National media except one or two channels, social media has been flooded with support, criticisms, posts of hope and faith and fundraising campaign for the “bigger disaster than COVID-19” as CM Mamata Banerjee said in a Press Conference even from the Animation, Comics community. 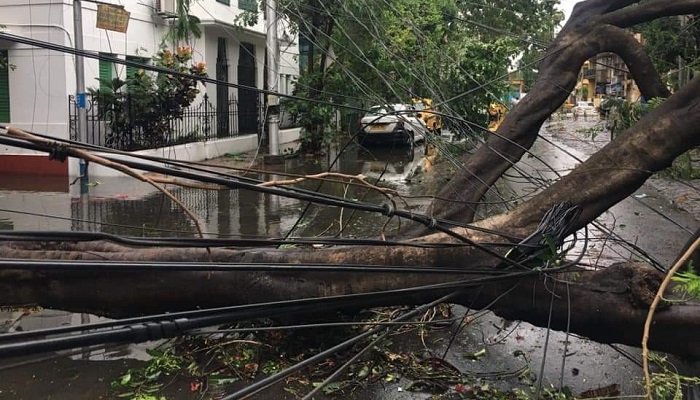 Here are the ones that depict solidarity, hope and never say die spirit : Aniket Mitra – Independent Animator, illustrator and graphic designer Shocked at the conditions, he told us, ”The images that I’ve drawn as of now are only to give hope and faith to people. We’ve to fight and stand up to this situation. We’ve to be fearless, on one side there’s the pandemic and then there’s this destruction caused by the cyclone. I want that when people look at these images they will not lose hope and tell themselves “Haal chero na bondhu! (Don’t give up friend).”


If you kick me when I am down, you better pray I don’t get up! #bengalroars #strongerthanbefore


Stand Up For What You Believe In. Even If It Means Standing Alone. #bengalroars #strongerthanbefore?

Upamanyu Bhattacharyya – Animator at Ghost Animation Presently out of India, he has always voiced concerns about Climate change and its adverse effects. “Lives and livelihoods in the East of India have been ABSOLUTELY DEVASTATED last night. It wasn’t just a storm, it’s legitimately the worst the region even remembers seeing. PLEASE raise awareness about the plight of the people in the area, especially those who are now left without homes and shelter. Please make sure they get the help they so require. Please don’t let this become some vague news from the East which we don’t talk about much anyway,” captioned he on one of his artworks.


wbserf.wb.gov.in In the face of the state’s biggest disaster in recent times, let’s stand together and stand with all those in need. DONATE to state relief funds and other organizations working on the frontlines to get Bengal back on its feet. #westbengal #state #cyclone #supercyclone #amphan #relief #donate #standwithbengal #bengalstandsstrong #hope #rebuild #art #illustration #drawing

A post shared by Upamanyu Bhattacharyya (@upamanyubhattacharyya) on May 21, 2020 at 9:06am PDT

A post shared by Upamanyu Bhattacharyya (@upamanyubhattacharyya) on May 23, 2020 at 4:30am PDT

Krishnendu Mondal – Illustrator  Deeply saddened, Mondal told us, “Being an artist, it is a very tough situation for us because of the lockdown and cyclone Amphan has put the last nail in the coffin. Not only this, I’ve seen the disastrous effect of it in different parts of my state. Everything is so messed up. It’s so painful to see my uncle’s situation, who is a farmer, and everything is destroyed for them in the fields. But we will fight back against these odds. Let’s think positive and spread positivity in these dire situations.” Mahfuj Ali – Comic Artist and Graphic Artist Broken at the destruction, noted Ali, “When I heard about this cyclone is going to hit, I thought about areas like Sundarban, Sagardwip, where a lot of people are fishermen and made an illustration with a hope that they are fine. I don’t know if they really have proper shelter from cyclonic storms but I just prayed that they should have. Then our state faced the wrath and destruction of that storm. My friends told me how scary it was, and then there’s COVID. I still wanted people to help each other and help small animals who also became shelter less after falling off of numerous trees. I wanted people from other places to notice how we are affected. So made an illustration showing the Map of Bengal with the bloodshed pattern created by the storm. This morning I saw pictures of thousands of books under water in college street, which saddened the mood. But wanted to give the message that, whatever happens. We will rise and shine again through the knowledge street.” Reesham Shahab Tirtho – Artist at Studio Terracotta, Dhaka Equally affected in Bangladesh, Titho said, “Corona has hit us quite hard as we live in one of the most densely-populated countries in the world and also economically feeble. Physical distancing and staying at their homes are already quite difficult for the people living in the margins. It’s already hard enough to survive, now comes this natural disaster, Amphan which was like heaping sorrow upon sorrow. People suffering from corona, carrying the malice on their back now have to carry the devastating weight of amphan. Hence came the idea of the cartoon.”

Abhinandan Banerjee – Graphic artist Devastated at the loss, he stated, “Here I sit miles apart from home…feeding my pulsating anxiety is the state of my land at this apocalyptic time which has left me devastated. I haven’t spoken to my parents since last afternoon. But that is not it. It is the sheer helplessness and the atrocity suffered by the people of an entire state which has haunted me and kept me awake as if the ultimate disaster hasn’t passed but yet to come. I feel heartbroken.” Soutik Das – Professional System analyst and illustrator Helpless away from home, Das shared, “I was supposed to be in Kolkata during this time. Had even booked my tickets 3 months back. But that was not to be, as we were reeling under Lockdown in the US) and ‘social distancing’, in came AMPHAN. The Bengali News channels were alternating between COVID, AMPHAN and Migrant Labourers. Could not imagine that once in a century a perfect storm was brewing on the horizon. I had seen lots of cyclones, the most recent being a couple of weeks back in Atlanta. But I was not ready to see the images that came after AMPHAN made landfall. My city looked war-ravaged. My school area of Southern Avenue which boasts of amazing boulevards and green shades, lay devastated. My locality around Behala, Tollygunje was submerged. All the phone lines were out and my frantic calls to my parents were not connected. My sister was able to get hold of them and shared the details with me which helped me calm my nerves. The whole day, I was not able to work properly even when I was working from home. Every regional channel I opened brought the pictures of total destruction. To make matters worse, none of the national media or the so called celebs from outside of Bengal were reacting to it or covering this mayhem in its entirety (Thoughts and Prayers started to pour in much later). As a Bengali it pained me to see the step-motherly attitude. But then again, the Bard of Bengal said “Jodi tor daak shune keu naa ashe tobe ekla cholo re” (If no one comes along you hearing your call, walk alone). I know Bengal would rise, because we have always been.” Amphan has broken Bengal to shambles. But, I know it will rise again, be beautiful and strong again as it always have. And as Murakami said, “And once the storm is over, you won’t remember how you made it through, how you managed to survive. You won’t even be sure, whether the storm is really over. But one thing is certain. When you come out of the storm, you won’t be the same person who walked in”, we will make it through. Stay strong Tilottama!