Bollywood sells and how? After selling and endorsing everything from Bicycles to Family Cars and Hair Oils to premium fabrics, Bollywood Stars are now become the ‘item‘ for casual games makers.

Taking the star value into its games a step further, Reliance Digital Entertainment‘s Zapak.com has come out with a game, ‘Puppy-Razzi‘ which features Superstar Salman Khan in a whacky, funny game-play.

This is the first time that Salman has been associated with such an initiative. The idea behind ‘Puppy-Razzi‘ is to click Salman in different moods and poses. When the player clicks him without getting noticed, the player gains points, and if the player gets noticed, Salman‘s two beloved dogs ‘My Jaan‘ and ‘My Son‘ catch the player and the game ends there. 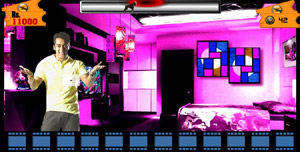 Speaking to AnimationXpress.com, Rohit Sharma, COO, Zapak.com shared, “Our association with Salman is a unique one. Under this association we intend to create a zone on Salman Khan. The zone would host games on Salman Khan and the superstar is working closely with our Team to conceptualize some of the games. While there is a trend towards games based on movies, we have decided to associate with a celebrity and create games around them purely because we feel a game around a celebrity has a longer shelf life as compared to a game around a movie”

About the marketing strategy of ‘puppy-razzi‘, Sharma shared, “We are planning an outdoor campaign for games that are based on Salman Khan. We have also spoken about the game extensively and the fact that Salman himself launched the game for us has created a lot of mileage for the game”

“Puppy Raazi has already been launched and running well with the players. The route that we are adopting is unique, whether on the celeb based games or regarding the portal in totality. The launch of Zapak.com has been at the right time when the Indian market is poised for a gaming explosion. The demographic and economic profile present the ideal conditions for the Indian gaming market which will grow by leaps and bounds. With a 54% population below 25 years of age, India is only getting younger. We are investing $ 100 million in this venture over the next three years and we at Zapak believe that gaming is in our DNA” concluded Sharma.

The game has been developed by a team of 6 artists and programmers in a span of two months. The team did include inputs from Salman Khan in the creation of the game. There are other games featuring Salman in the pipeline and the game next in line is proposed to be action oriented.

At present, Zapak.com is offering free-to-play games in both the single Player and multiplayer Category. Under the single Player banner it offers games across genres like Action, Arcade, Racing, Puzzles, Sports and Strategy.

The gaming portal has over 150 games to offer and is designed to offer an exciting gaming experience across multiple genres encompassing all ages at no cost at all. The platform provides a unique score capture functionality which would further augment the consumers competitive spirit and enable exciting contests.