Cloud gaming, also known as gaming on-demand or gaming-as-a-service, is a type of online gaming that runs games on remote servers and streams them directly to a user’s device, or more colloquially, playing a game remotely from a cloud. Cloud technology has revolutionised almost all the sectors but in gaming, it is still at the nascent stage, however, giants like Google, Microsoft, Sony have already entered the market with their subscription plan and technology; however, none of them are available in India.

To understand the Indian scenario of Cloud gaming, we reached out to The Gaming Project co-founder Sarang Atri. He says, “Cloud Gaming is a completely new scenario in India! People are still experimenting with it; whether it supports our current internet infrastructure or not. So a lot of people are still in the early phases. We have a head start as we started this company exactly two years ago.”

The Gaming Project was co-founded by two school friends of different background, Atri and Manan Mittal, and they founded the platform when they analysed despite their obsession of playing a game, they were not compatible with the device neither did they have the money to buy an expensive gaming PC. That’s when they thought to work on the root problem and rolled out The Gaming Project to bridge the gap between gaming and expensive devices.

They went live in March 2020 and before that, they had a beta which lasted for about three months. According to Atri, “The Gaming Project is India’s first cloud gaming platform, where users can play their favourite PC games on their PCs/laptops or smartphones, by streaming the data on their devices and thereby avoiding to download anything or invest in any high-end devices. Users can now play demanding PC games on low-end laptops or even on their mobile phones. Simply put: It’s a Netflix for games.”

They have faced various challenges since the inception but none were surprising from them. Since they are the first one in the nation, they did not have the footprints to follow so whatever they mapped out for cloud gaming they mapped as a gamer. They thought what would a gamer want from a cloud gaming platform, and that has driven them in the process of creating The Gaming Project.

He believes cloud gaming will revolutionise the industry in the coming years. In fact, companies like Microsoft and Google are standing out because they are embracing the paradigm shift. He explains, “People who couldn’t play games before, are now part of this huge demographic which the companies were not even thinking about. With the rise of 5G, cloud gaming will also be a fundamental part of the upcoming next-gen of gaming infrastructure.”

Their subscription offerings are modelled like a gaming parlour or cafe where users pay for the number of hours they spend on gaming and the number of games they play. They are a Freemium service with monthly subscriptions, which are of Rs 200 and Rs 500, and offer users 20 hours per month or unlimited hours respectively. They also have weekend plans aimed for working professionals, where for Rs 149 users can play for unlimited hours for the entire weekend. They also have hourly top-ups for someone who runs out of hours, starting with Rs 25 per hour and so on. Their biggest draw that they think is their Free plan where users have access to some games and can play for six hours a month so that users can get a feel of the service and the technology. 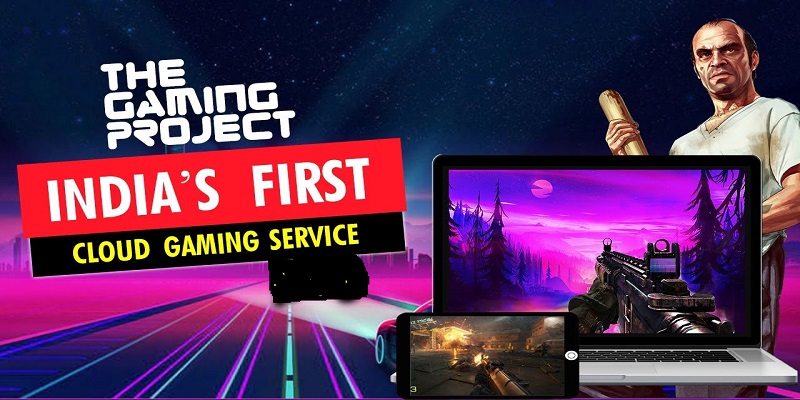 There are a number of big players in cloud gaming; right from Google, Microsoft, Sony and more. When we asked what has been The Gaming Project’s strategy to be at the frontline, he replied, “We are self-aware of the fact that the competition we face is from the giants of the industry and our only strategy is to be competitive and give the people what they want instead of trying to refocus our business model to what is convenient to us. The Indian market is quite price conscious so we always keep that in mind while trying to explore any model we put forward.  This is the reason we have one of the cheapest subscription plans and also the fact that we try to add games based on user feedback.

We can’t match up to the giants of this industry in terms of resources, but what we can do is be closer to the users, provide them friendly support and always listen to them, whether it’s about what’s the next game to add, or what controller to support, etc. We feel that listening to the users has given us so many insights and given the fact that we have more than 25,000 users without spending a single penny on marketing/advertising, this strategy is quite useful.”

According to Atri most of their users are between the ages of 18-25 years, but they also have a lot of school going kids and working professionals as well. As per the user preferences on the platform he has noticed that users like to play all types of different games, spanning across all genres like FPS, RPGs, and so on. Users do like to play their own games, a choice they appreciate and a number of them are also quite happy about the Free plan, which lets them experiment with the service first, before making any sort of financial commitment.

Cloud gaming is all about playing games at convenience and device shouldn’t be a bar. He added, “One of our users, who is 14 years old, told us that they only had one laptop in their household, so during work hours his parents use the laptop while he plays on the phone and then when the laptop is free, he continues the same game on it. It’s this convenience that makes cloud gaming the perfect upgrade to gaming.”

He almost agrees that players are finding it hard to conceptualise the idea of cloud gaming. “It’s because the concept is so new, it sounds alien. It is also one of the reasons for our Free plan so that users can actually see it happening before they want to make a financial commitment. I believe with some exposure, the rise of services like ours and with the media covering it (like you are, thanks a lot!) this can be easily resolved.”