The news on PUBG MOBILE ban in India has brought a big jolt amongst gaming aficonados aka ‘PUBG wale’ given the additive character of it which has made the gamers unable to cope with the loss.

While some PUBG players have ported to other existing battle royalegames in battle royale genre, others have been reported to have gone into a form of digital despondency.

Apart from the engrossing nature of the game, many believe the premium possession of PUBG in-game items is also one of the reasons for depression, frustration, mood swings, anxiety that many.

For instance, a recently  21-year-old ITI student allegedly ended his life over his frustrated of not being able to play PUBG. According to cops, Pritam Halder from West Bengal’s Nadia district was found hanging in his house in Purba Lalpur in Chakdaha police station area. Police have registered a case of unnatural death.

“He would play it at night. I think he died by suicide as he was not being able to play PUBG,”says PTI quoted the mother as saying.

The lure of the game has reeled in many. Earlier two day before the ban a 16-year-old boy named Anand ‘died by suicide’ after being scolded for playing PUBG.

Police informed thst the incident occurred in a village under Umreth Taluka of Anand on 31 August when the boy, son of a school teacher, allegedly consumed pesticide kept at his house.

Post ban, Tencent shed more than 2 per cent a day after India announced a ban on its popular gaming app PUBG MOBILE and its other apps. Data available on the Hong Kong Stock Exchange (HKEX) website showed the stock of Tencent Holdings closing 2.02 per cent lower .

Following that the South Korean PlayerUnknown Battleground corporation has reportedly decided to pull back its association with the PUBG MOBILE franchise Tencent Games, to regain scores of lost gamers days ban according to its official blogpost.

“PUBG Corporation fully understands and respects the measures taken by the government as the privacy and security of player data is a top priority for the company. It hopes to work hand-in-hand with the Indian government to find a solution that will allow gamers to once again drop into the battlegrounds while being fully compliant with Indian laws and regulations. In light of recent developments, PUBG Corporation has made the decision to no longer authorize the PUBG MOBILE franchise to Tencent Games in India. Moving forward, PUBG Corporation will take on all publishing responsibilities within the country. As the company explores ways to provide its own PUBG experience for India in the near future, it is committed to doing so by sustaining a localised and healthy gameplay environment for its fans,” the company said in the statement on its website. 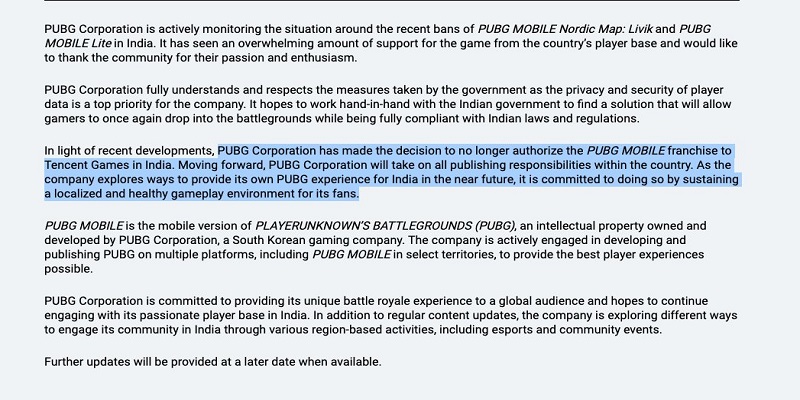 PUBG Corporation is a subsidiary of South Korean video game company Krafton Game Union. It is already the developer and publisher of PUBG that is meant for PC and console gamers. However, PUBG MOBILE and PUBG MOBILE Lite were created in a collaboration between PUBG Corporation and Tencent Games.

In the same context, the government is yet to provide any clarity or approval whether the latest move by PUBG Corporation will alter the PUBG  situation within the country even as the existing gamers, streamers, and organisations are pining for it.