Licensed music has been an issue for many streamers in the past, with takedown notices coming from rights holders and making certain games complicated to stream or post videos of. To resolve the gamers challenge, Twitch is testing a solution to this issue. An app called Soundtrack by Twitch will allow streamers to play license-cleared music in their streams, according to their official blogpost.

The official blog post reads: “We know how important music is to your creative process, and have heard how frustrating it is to understand and navigate the complex and evolving music ecosystem. Soundtrack gives you a curated collection of rights-cleared music and integrates with your streaming software to separate your audio sources, allowing you to keep your channel safe while you create compelling content and grow as a creator.”

Soundtrack by Twitch is in beta right now, but it offers over a million licensed tracks for use in streams. The library of available audio content includes songs from over 30 independent labels.

“Soundtrack’s vast library of songs from fresh, independent artists are all cleared for worldwide listening during your live streams. Music from Soundtrack is separated into its own audio channel so you can play music on stream without worrying about your archives being muted or receiving strikes against your Twitch channel (or wherever else your content may go!),” reads the post.

Artists currently available, according to the blog, include Above & Beyond, mxmtoon, Porter Robinson, RAC, SwuM, and many more. Claude Von Stroke, Cloudchord, Chrome Sparks, and Tia Nomore are also listed on the Soundtrack website.

The current beta is compatible with OBS Studio v26.0 or later, and compatibility with Twitch Studio and Streamlabs OBS is planned. Streamers can join a waitlist now, and invites to the program will be sent out over email.

SoundCloud has been working with Twitch to help musicians earn money from livestreams during the COVID-19 pandemic, so its inclusion on the list isn’t much of a surprise. Of course, Twitch is also angling Soundtrack as a way for new artists to get discovered when they’re featured on a stream. DistroKid, for example, is a self-distribution service that helps artists get their music on streaming platforms, so there’s plenty of aspiring acts there. 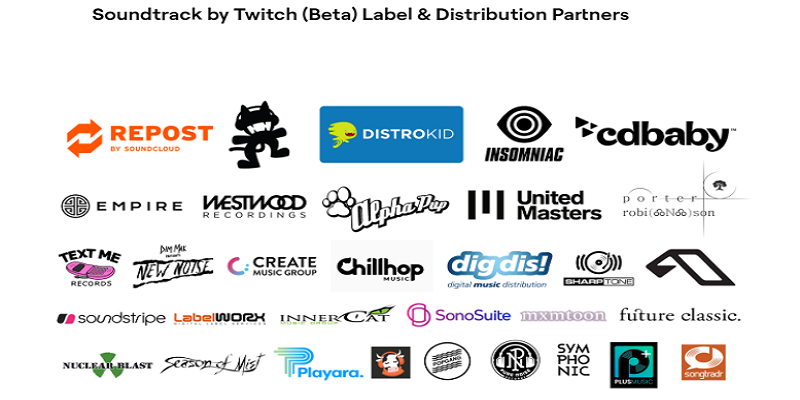