The fifth edition of the summer season of ESL India Premiership, that went live on 1June 2020 concluded with a bang on 19 July. sponsored by Mercedes-Benz, Red Bull, Western Digital, Disney + Hotstar, and Airtel India esports Tour, the tournament experienced an exponential rise in participation and steep rise in viewership. Player registrations were up by 1866 per cent as and the viewership by three times in comparison to the last year’s summer season. The winners of all the four games played — CS: GO, PUBG MOBILE, Clash of Clans and FIFA20 — collectively took home the pool prize of a whopping Rs 38 lakh this season. 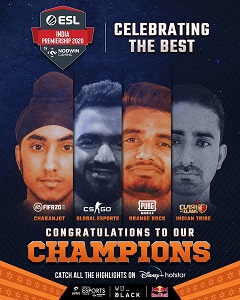 NODWIN Gaming kick started the summer season of the tournament with an exciting new format that had the players on the edge of their seats right till the end of the tournament, as they got a second chance to qualify for the finals through the Grand Final Playoffs.

The viewership of the summer season ESL India Premiership, which was telecasted live on Disney + Hotstar, saw a huge spike this year, due to the overwhelming response from gaming communities of fresh additions like FIFA20, PUBG MOBILE and Clash of Clans, that drove more people onto the digital platform.

“This summer season of the fifth edition of the ESL India Premiership has been a stupendous success in every possible way. As tournaments like these become bigger and grander, we are continuing to see a growing interest among the Indian youth to take up esports professionally. We have also seen more traction in the advertising space with a lot of new partners keen to hop on to the bandwagon. This is a very interesting time for esports in India. We’re already looking forward to our fall season of the tournament,” said NODWIN co-founder and MD Akshat Rathee .

This season ESL India Premiership experienced phenomenal participation with player registrations up by 1866 per cent and the viewership growing by three times in comparison to the last year.