While IPL 2021 was happening within a span of nearly seven months from the last IPL, it was helping the fantasy sports operators bring in more profit to business in terms of revenue and number of users acquired during the season. Unfortunately, BCCI suspended the IPL season midway just after completion of 29 matches due to the increase in Covid-19 among the players and the staff around them. As fantasy sports is directly dependent on the sporting events, therefore the sudden halt of IPL 2021 disrupted the fantasy sports ecosystem. Will the remaining IPL matches take place was the question in the minds of fantasy sports operators as without it, they might fail to reach the yearly revenue mark and might not be able to bring new investors to the market.

After a lot of deliberation, BCCI has finally announced that the remaining IPL 2021 matches will happen in the United Arab Emirates (UAE), during the September-October. In a Special General Meeting chaired by BCCI president Sourav Ganguly, it has been confirmed that the tournament will be shifted out of India because of ‘monsoon.’

“The Board of Control for Cricket in India (BCCI) on Saturday announced the completion of the remaining matches of VIVO Indian Premier League 2021 season in the United Arab Emirates (U.A.E) considering the monsoon season in India in the months of September-October this year. The decision was taken at a Special General Meeting (SGM) held virtually, where members unanimously agreed to resume IPL. The BCCI SGM further authorised the Office Bearers to seek an extension of time from the ICC to take an appropriate call on the hosting of ICC T20 World Cup 2021,” BCCI said in a release.

The news has brought fantasy sports operators a sigh of relief. In conversation with AnimationXpress, PlayerzPot CEO Sunil Yadav said, “Return of IPL is good news and will give a boost to the fantasy segment as it is followed by the T20 world cup. The remainder will uplift the segment and create momentum for T20 World Cup. IPL plays an important role in user activation and once users are active on the platform it will automatically help us in retaining them during the World cup period. As the time span between the two is very less. This will also result in a better ROAS (Return on ad spend) if industry players plan things strategically”

It is quite challenging for Fantasy Sports operators to sustain while the sporting events are halted. Last year when all sporting events were halted the company restructured their business model so that their business numbers don’t get oscillated. He expressed, “First year of 2020 when all sporting events halted for a few months, we restructured our whole process and aimed to transform from just a fantasy platform, to a gaming destination where we could introduce casual games. Because we took the step earlier despite suspension of IPL, as an entity we have not faced any issues in terms of growth factor that we had0 decided and even in revenue. Even in this difficult time we are growing and as far as the overall health of the organisation is concerned, we are still at a better place.”

During IPL 2021 the company witnessed 3x of user base compared to past IPL and have gained 2x of revenue. Whereas post IPL the user growth has slowed down to an extent but the revenue numbers have increased exorbitantly. They have earned almost 70 per cent of their last year’s revenue in the last two months of the financial year 2021.

Fantasy sports players and operators in India are not only dependent on IPL, but they also focus on other cricket events. Although  operators and the players shifted their focus towards the European tournaments and other tournaments happening outside India due to the suspension of IPL, nothing can take IPL’s place.

He expressed, “The kind of participation and engagement that an IPL event creates is not comparable to even the World Cup or any other sporting event.”  And their main target and challenge at the same time is to retain the audience on the platform with either fantasy sports or any other form of gaming.

Last year when sporting events were cancelled/ postponed they introduced casual games to ensure the business revenues were flowing in. First they had to find alternative of fantasy sports platform and second broadening the user base on their platform irrespective of age window.They understood that casual games are played by everyone irrespective of age groups and therefore they have introduced the type of games on the platform which users are well acquainted with, as they might have played those games in some point of their lives.

As of now PlayerzPot has close to five games up and running on their platform which includes chess, snakes and ladder, Ludo and so on. Carrom and Pool will be launching in the coming month. Apart from that they are also moving towards introducing real money games like rummy and poker in June. Initially they planned to launch all of these by 2023 but due to Covid they have preponed their plan. For casual games they have introduced a leaderboard system just before the month of IPL and that has brought them good traction. Later they plan to introduce the leaderboard system for real money games as well, as it will help to increase the participation of the users on the platform. 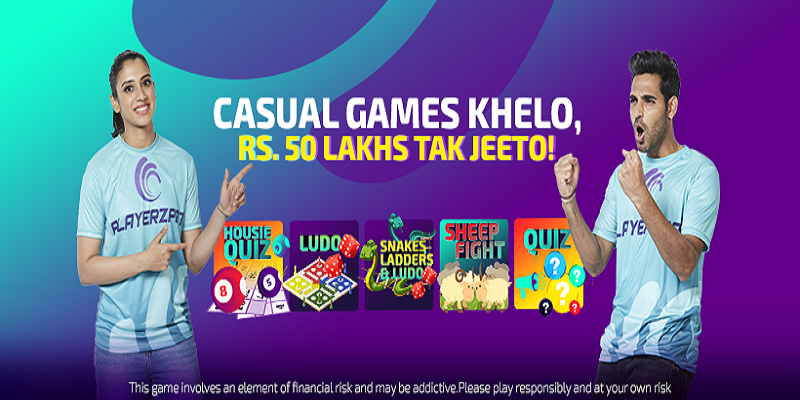 Their retention team is constantly working on boosting and navigating users’ interests from one form of game to another. Slowly they are also planning to introduce games like Candy Crush, or Fruit Ninja to target specific set of users on the platform

By the end of 2021 they are aiming to have 20-25 games on their platform and they want to create a mix pool of user variants or acquire users who at least play two variants on the platform; like fantasy and casual games, or casual and real money gaming, or real money gaming and fantasy sports.