The fantasy sports format has already seen significant adoption by sports fans in the global market and India has also witnessed exponential growth in the Fantasy Sports user base during the last two to three years. According to the Gameplan 2020 report Fantasy Sports user-base grew from 2 million in 2016 to 90 million in 2019. Just when the time for fantasy sports was right, the first quarter of 2020 witnessed the unforeseen impact of a global pandemic in the form of Covid-19. The novel coronavirus impacted the entire globe, postponement, and cancellation of major sporting events across the globe and especially marquee properties like the Indian Premier League (IPL) back home.

It is true that, before the pandemic, the emergence and growth in popularity of sports leagues in India, coupled with the rapid improvement in digital infrastructure and payments has led to the rise of fantasy sports. This has become in no time as an alternative means for the sports enthusiast to connect with their favourite sports, and test their skills and knowledge of the game. However, the pandemic led the online fantasy sports platforms directly affected by the temporary discontinuation of sporting leagues, as these skill-based gaming platforms run on a format that has direct dependence on the real-time sport being played.

Impact of lockdown in fantasy sports

Industry interactions indicated that the operators have been proactive in their actions to combat the challenges posted by the Covid-19 crisis.

Some of the FIFS members have modified their offerings while operating under the ‘game of skill’ umbrella. 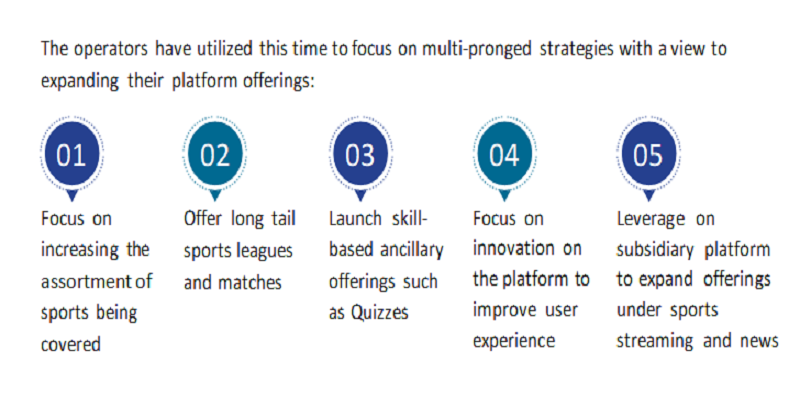 While the major sports leagues across the globe were disrupted, the leading online fantasy sports operators have moved ahead to include leagues from secondary markets, which were relatively less affected by the ongoing pandemic. Here are the things that the industry find fair to do during Covid-19 pandemic:

Through these initiatives the platforms have helped recover some of the user- engagement that had seen a sharp dip amidst the pandemic and provided sports-based content for the fans who were devoid of any engagement opportunity with sports at large, be it watching or participating in online Fantasy Sports.

Going Forward
The online fantasy sports firms are optimistic that this is just a small blip in the industry’s growth trajectory. Once the overseas and domestic leagues start commencing, industry players expect a ~20 to 25 per cent jump in the revenues of Q3 FY21 over the planned revenue. The stakeholders are also of the opinion that once things return towards normalcy, a sharp recovery is expected with the leagues restarting. Companies like Dream11 have factored this into their hiring strategies with plans to add ~250 members in the near term to its existing team, MyTeam11 has also added 20 new members to it company during the lockdown and is looking forward to going ahead with hiring plans as it expands. 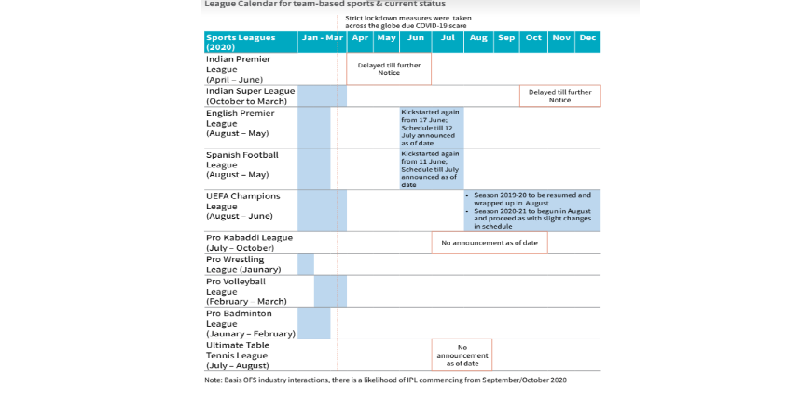 Platforms like FanCode and SportsTiger are also likely to broaden their array of offerings to increase engagement and improve customer experience by educating them about sports that would in turn compliment their sister platform’s online fantasy sports offerings.

The norms of social distancing have called for revisiting the reliance on call-centres for customer support making a systematic push towards automation using chatbots and IVR. This would also benefit users through more real- time assistance, while reducing costs for the online fantasy sports operators.

Most operators have indicated that the next ~6 to 8 months post the lock-down would be focused on targeted marketing to regain users who might have migrated to other real-money game platforms or other forms of entertainment.

As India strives to overcome this crisis, it would be premature to comment on when the domestic sports leagues will resume. Though the overseas leagues including the widely popular English Premier League will help user engagement on the online fantasy sports platforms; IPL drives ~35 to 40 per cent of the online fantasy sports market’s revenues. If IPL indeed takes place around October – November 2020, the Indian sports fans are likely to have access to sporting leaguesand tournaments non-stop for eight to nine months spanning between October 2020 and May to June 2021. This would help partially offset some revenue loss due to the postponement and cancellation of sporting events in Q1 of 2020.