Developments in cloud technology have enabled the rapid distribution of cloud gaming models. Cloud gaming enables remote access to interactive games and streaming videos over the internet. It also allows devices to smoothly run various high-quality next-generation games with lower computational power. These factors are anticipated to drive the market growth over the forecast period. The global cloud gaming market size was valued at USD 0.32 billion in 2019 and is expected to grow at a compound annual growth rate (CAGR) of 47.9 per cent from 2020 to 2027 and the market size is expected to reach $ 7.24 billion by 2027, according to a new study by Grand View Research.

Rising investments in 5G technology and access to numerous games on the cloud at affordable prices are also expected to contribute to market growth. Furthermore, market players are observed partnering with telecom companies to deliver cloud gaming services globally. For instance, in January 2020, Microsoft Corporation partnered with SK Telecom  to expand the reach of its Project xCloud Preview, a game streaming solution in South Korea.

The rising popularity of cloud gaming along with the availability of enhanced cross-platform gaming platforms, which improves gaming experience, is anticipated to drive the market growth. The increasing penetration of internet services and easy access to games on the cloud are also contributing to the growing demand for cloud gaming. Additionally, network infrastructure developments such as 5G offer lower latency and higher bandwidth, which enables gamers to seamlessly stream XR (augmented reality and virtual reality) gaming.

The rising trend of social media gaming is anticipated to have a positive impact on market growth. A significant percentage of the global population spends time on social networking sites such as Facebook, Instagram, and Reddit to play games. Additionally, social networking firms are focusing on acquiring cloud gaming providers to offer various cloud games on social media platforms and improve engagement with customers. For instance, in December 2019, Facebook, Inc. acquired Playgiga, a cloud gaming service provider. Through the acquisition, the company intended to launch cloud gaming services on its platform to increase user engagement.

Cloud gaming enables users to play games through remote servers rather than installing a game on the computer or console, thereby eliminating storage issues and the need for buying the latest gaming PCs or consoles. Benefits offered by cloud gaming include scalability, improved speed, and better user insights. Cloud gaming also helps restructuring content on various smart devices, which improves content delivery across all mediums. These factors are anticipated to drive the market growth over the forecast period.

Accessing games that are streamed through the cloud requires high-speed and uninterrupted internet connection. However, the lack of proper network infrastructure, particularly in developing countries such as India, Brazil, Mexico, and Chile, causes fluctuating internet speed. This is likely to hamper the market growth. Cloud gaming providers are relying on third-parties for online payment processes, such as the Amazon-branded payment processes, which involve the processing of electronic checks, debit card, and credit card. Failure of these services could adversely affect the operations of cloud gaming vendors.

Type insight: The video streaming segment dominated the market with a revenue share of over 55 per cent in 2019. The demand for video streaming is increasing as it eliminates the need for additional hardware devices. Furthermore, video streaming services allow users to play games on any platform and from anywhere via the Internet.The increasing focus of vendors on developing platforms that offer enhanced gaming experience is further anticipated to propel the segment growth. For instance, in November 2019, Google. launched Stadia, a cloud video game service. Stadia allows users to play console-based games on smartphones or web browsers. 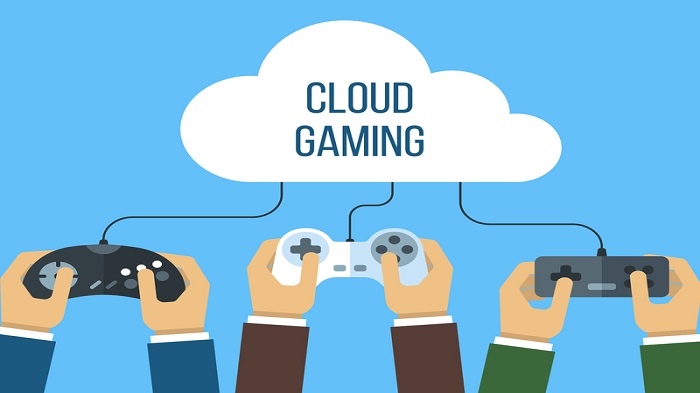 Device Insights: The gaming consoles segment dominated the market with a revenue share of over 50 per cent in 2019 and is expected to maintain its dominance over the forecast period. Benefits such as high-end sound systems and displays, which offer a rich and improved gaming experience to users, are expected to drive the demand for gaming consoles. Furthermore, console manufacturers are introducing new gaming devices that are compatible with the latest specifications based on gamers’ demands, while enhancing the gameplay experience. Based on the device, the market has been segmented into smartphones, tablets, gaming consoles, PCs & laptops, smart TVs, and head-mounted displays.

The PCs and laptops segment is anticipated to record considerable growth over the forecast period. Gaming PCs enable users to customize them according to their gaming needs. PC gaming is also more affordable compared to console gaming as the resources needed to compile games on PCs are freely available. These factors are further anticipated to drive the growth of PCs and laptops segment. Furthermore, cloud game developers are focusing on developing gaming services that can be run on all PCs and laptops. For instance, in February 2020, Nvidia Corporation launched GeForce Now, a cloud gaming service that allows users to play games on all types of PCs and laptops.

Gamer Type Insights: The casual gamers segment dominated the market with a revenue share of over 50 per cent in 2019 and is further expected to maintain its dominance over the forecast period. This is attributable to the cost-effectiveness and convenience offered by cloud gaming. Furthermore, continuous enhancements in 5G network services and the introduction of 5G smartphones are expected to increase the demand for cloud gaming among casual gamers over the forecast period. Based on gamer type, the market has been segmented into casual gamers, avid gamers, and lifestyle gamers. 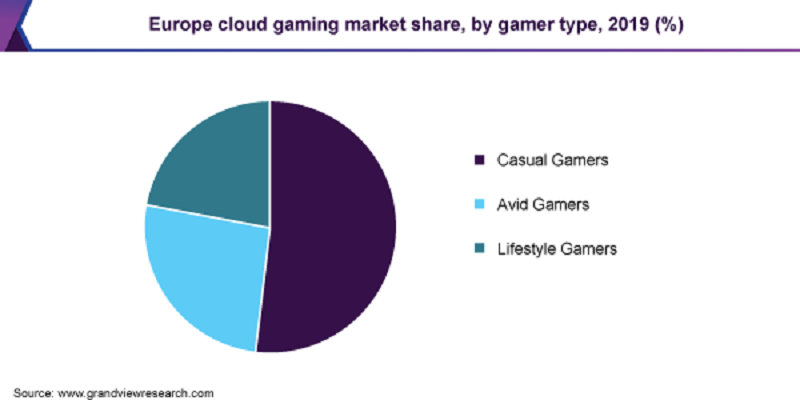 The growing popularity of esports tournaments across the globe and rising number of eSports competitions that offer millions of prize money to the winners are driving the growth of the casual gamers segment over the forecast period. For instance, in July 2019, Epic Games organised the Fortnite World Cup, in which over 40 million players participated. The company announced USD 3 million prize money for solo and duo winners. The majority of the population is quarantined in the wake of the Covid-19 outbreak, which has increased the number of casual gamers globally, thus contributing to the segment growth.

Regional Insights: Asia Pacific dominated the market with a revenue share of over 44 per cent in 2019. The growing penetration of smartphones and rising demand for entertainment across the region is expected to drive the growth. Cloud providers are partnering with cloud gaming service providers to launch cloud gaming services in the region. For instance, in September 2019, Alibaba Cloud, a subsidiary of Alibaba Group Holding Limited, partnered with Ubitus Inc. to launch a cloud gaming solution on the Alibaba cloud platform. The new solution enables users to provide enhanced gaming experience to gamers in China.

North America is anticipated to record considerable growth over the forecast period. This growth can be attributed to the presence of key vendors such as Google,  Apple, Microsoft Corporation; and International Business Machines Corporation in the region.

Key players that dominated the market in 2019 include Amazon.Com,  Microsoft Corporation; Apple; Alphabet; International Business Machines Corporation; and NVIDIA Corporation. Market players are engaging in partnerships, new product developments, and mergers and acquisitions to strengthen their position in the market. For instance, in December 2019, Tencent partnered with a chip designer company called NVIDIA Corporation to launch cloud gaming in China. Through the partnership, the company planned to launch Start, a cloud game streaming service in China. Start provides gamers with access to AAA games on underpowered devices anywhere and at any time.