Krafton’s BATTLEGROUNDS MOBILE INDIA (BGMI) has finally launched officially and it is a sigh of relief for gaming aficionados. The game was earlier in the Beta version which was open for all but on a first come first serve basis.

Krafton also mentioned that depending on the device environment, the exposure time of the official version in the Play Store may be different. The game is currently available only in India and for android users. However, we at AnimationXpress noticed that players can change the India server from the settings option if they feel any hindrances in the India server while playing the game.

Sharing views on the official launch of BGMI, Krafton CEO, CH Kim said, “We at KRAFTON are delighted to introduce BATTLEGROUNDS MOBILE INDIA for our fans in India today. Designed exclusively for our Indian fans and gamers, BATTLEGROUNDS MOBILE INDIA will provide a superlative gaming experience. This is just the beginning of a series of new content, collaborations and esports tournaments coming your way, and we will strive to ensure that our fans and community in India can fully enjoy the battlegrounds experiences.”

The official blogpost shared, “We apologize for the inconvenience upon temporary shutdown of the data transfer. Those who wish to transfer their data, please do so before 6 July.”

Along with that Krafton has added various in-game events which are prepared in celebration of the launch of the game. Krafton is asking players to join them now and redeem them before the clock rings the final bell!

The blog post further reads, “The duration of receiving INDIA KA BATTLEGROUNDS Gift and 1M and 5M total download rewards is extended to 19 August 23:59:59 (UTC). The Constable Set (PERMANENT), the 10M download reward, can also be claimed after the official opening until 19 August, 23:59:59 (UTC). Many more events are waiting for you!” 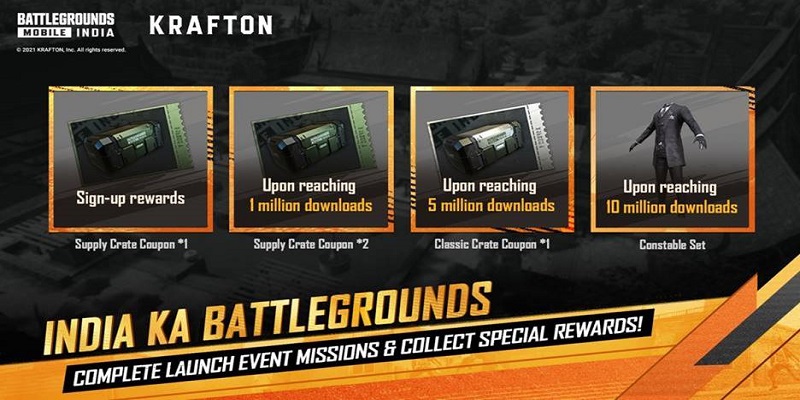 We have played the game and the game interface, graphics, characters, gameplay and the interface looks exactly the same as PUBG MOBILE. Apart from the guidelines set by Krafton there is hardly any noticeable change in the game.The battlefield opens with a statutory audio warning which says that- it is a stimulation game set in a virtual world and also asks players to take frequent brakes and play in moderation and responsibly.

BATTLEGROUNDS MOBILE INDIA went live for pre-registrations on Google Play on 18 May 2021 and secured 40 million pre-registrations as of today. The gaming enthusiasts have almost waited for nine months post the ban of PUBG MOBILE and the excitement of the launch of BGMI officially is above everything. The micro blogging site Twitter is now trending with #battlegroundsmobileindia and #BGMI. Here are some of the Twitterati’s reaction which shows their joy:

#battlegroundsmobileindia finally available for everyone in India
*Me to my forgotten squad pic.twitter.com/2itc9Fi50D


Some of the Indian iOS users also shared their grief on Twitter as the game is currently available only for Android users:

#BGMI officially launched today but only for android in playstore.


Few gaming industry experts have also shared their excitement. Here they are:

Skyesports CEO Shiva Nandy shared, “Indian esports is already growing at a rapid pace and the launch of Battleground Mobile India will only make it bigger. A lot of endemic and non-endemic brands will definitely show interest in BGMI. Skyesports can’t wait to start grassroots competitions once again.”

All Kerala Esports Federation president Amal Arjun shared, “Yeah, I’m also pretty excited like those millions out there. Festive mode! You know, there were some dilemmas, uncertainties, questions all over. At last, we got the exact answer we were looking for. Cheers to Krafton; for making this happen. Waiting for the IOS version as well… And the Future? Like they say, BOOM… BAAM..”

Trinity Gaming co-founder and CEO Abhishek Aggarwal said, “Finally, we all are witnessing the historic moment in the Indian gaming and esports industry as this exclusively designed game will fuel the growth of mobile gaming in India and the game will leverage the power of the mobile-first gaming ecosystem of the country. The journey from becoming a gamer to an influencer has just begun and it will be exciting to see how new gamers will grab this opportunity. For the gaming and esports content creators, it will be a new route to explore more new content and also engage with the new set of followers of BATTLEGROUNDS MOBILE INDIA.”

NODWIN Gaming co-founder and MD Akhsat Rathee shared, “The return of India Ka Game BATTLEGROUNDS MOBILE INDIA in its new avatar is the beginning of a new era in Indian gaming and esports. New teams will form, new stars will rise and the heroes of earlier will get a chance to claim their throne again. We at NODWIN Gaming are extremely excited to see what the future holds.”

Esports Federation of India director and Asian Esports Federation vice president Lokesh Suji shared, “After much discussion, we can now finally roll on to the exclusive esports game, created just for Indian players. It is much celebrated because of the exclusivity it offers and it also portrays how important the Indian esports sector has become for global gaming developers. With the latest launch, we can envision that the gaming community will thrive and we can expect to see more exclusive multi-player games being curated for the Indian market. It also supports our vision that India will become the next powerhouse in esports. It would have been great to see if our Indian game developers will create a game based on Indian ethos and culture which will create the exact buzz and hype just like BGMI did in India.”

Ultimate Battle founder Tarun Gupta, “At Ultimate Battle we were excited and eagerly waiting for BGMI to launch in India. It finally seems to be happening now and it’s historic. The first reactions from both professionals and casual gamers will be critical as this will reflect on the overall acceptance of BGMI in India. It’s also important to mention the expectations of the esports community from BGMI are really high.We’ll also be looking into adding BGMI to All India Esports league(AIEL) which will be launched this month.”