Legendary comic artist KC Sivasankar passed away on 29 September at the age of 97 at his Chennai residence. Well known for his illustrations in the popular children’s magazine ‘Chandamama’, especially those of the Vikram and Vetala series, Sivasankar was last of the original team of Chandamama.

Born in 1924 in a small village in Tamil Nadu’s Erode district, Sivasankar did a five-year art course at the School of Arts and after passing out in 1946, he joined the Tamil magazine Kalaimagal. He was hired by Nagi Reddy for Chandamama in 1952. It was there that he created the iconic Vikram carrying the Vetala corpse around his shoulders. While Sivasankar made several illustrations for the magazine, including tales from the Mahabharata and the Ramayana, it was for his work in the Vikram and Vetala books that got him huge acclaim. He continued working at the magazine for 60 years until it discontinued its print publications in 2012. He later joined Ramakrishna Vijayam magazine.

Sivasankar, who continued illustrating well into his 80s, has shared in interviews that Nagi Reddy used to remark that “Chithra (another artist) and Sankar are the two bullocks of Chandamama”. 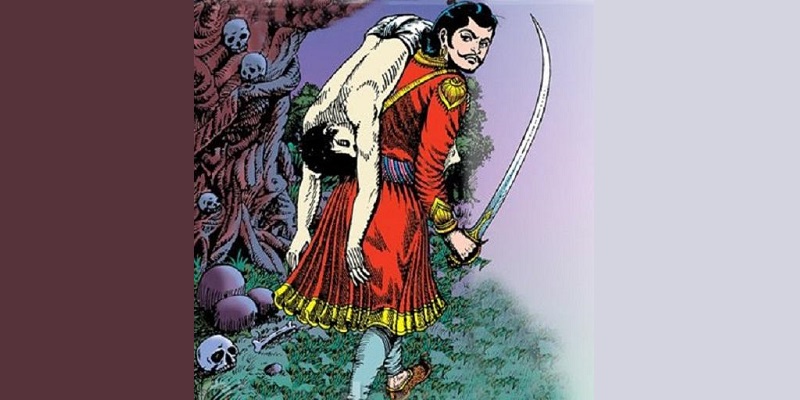 Chandamama was founded by filmmakers B Nagi Reddi and Chakrapani in 1947. Originally a Telugu periodical, it later started getting published in 13 Indian languages owing to its immense popularity among children and adults alike.

Comic artists and publishers across the industry fondly remembered Sivasankar and his work at Chandamama. Comic artist Abhijeet Kini said, “Chandamama still brings back childhood memories and to know that the person who brought the stories to life visually is no more means an era has truly ended.”

Amar Chitra Katha executive editor Reena Puri expressed, “KC Sivasankar was a legend in himself. I grew up reading Chandamama, like any child in the 60s. There was no Amar Chitra Katha or Tinkle and we would wait for our copy of Chandamama to arrive. What fascinated, apart from the stories themselves, were the beautiful sketches. I cannot think of Vikram and Vetaal as anything but what Sri Sivasankar drew. With his passing away we have lost a bit of our childhood.”

Tinkle art director Savio Mascarenhas mentioned his fond memories of his mother reading Chadamama. “I was seven or eight years old and it was natural for me to see this wonderful magazine in my house. And my very first viewing of KC’s work with Vikram and Vetaal. I used to peer into his artworks to just admire the intricate details that he put in them. What made his work so unique was his style; the way he portrayed his characters is embedded in my mind ever since. I still very clearly can see that vivacious image of Hanuman fighting Vali. And of course KC’s art of the valiant King Vikram will stay immortal.”

Tinkle Comics editor-in-chief Rajani Thindiath said, “Chandamama and its artists are iconic, drawing delighted readers with its gorgeous art easily translatable in any of its various language editions.”

TBS Planet founder Rajeev Tamhankar mentioned, “KC Sivasankar ji is one of the most respected and loved artists of India. We have lost one of the pioneers yesterday – He who had brought forth Indian graphical art form through the stories of Chandamama. All his illustrations, specifically the art of his Vikram and Vetala series has been imprinted on millions of Indian minds. Prayers and thoughts.”

Fenil Comics founder Fenil Sherdiwala added, “Chandamama started the trend of storytelling with beautiful pictures in India. I generated my reading hobby with Chandamama. I have many of them in Gujarati language. Vikram Vetal was one of my most favorite series from the publisher. When I started my own publishing house, my personal interest in artists grew too, I started collecting information about them. Sivasankar was one of those. Very sad to hear about his death. Hearty condolences to his family.”

As the industry quoted, this surely is end of an era, with the passing away of Sivasankar. May his soul rest in peace.