The COVID imposed lockdown has witnessed some amazing Indian animated shorts doing the rounds of social media, virtual film festivals and even becoming viral. With the pandemic opening newer opportunities, the medium has gained momentum.

National award winning actor Riddhi Sen along with his actor-animator friend Rajarshi Nag created an eight minute animated film, Thikana: A Day in Time (Thikana literally translates to Address) mainly to break their stagnancy and ponder upon a deep thought in the simplest way possible. Thikana released on social media platforms and YouTube on 27 August.

“It was a sudden decision to make Thikana around the end of March. All of us have been under house arrest and stagnancy creeped in. I thought about what a child would do being stuck at home. With so many options around us to pass our time, we’re losing out a lot on imagination. The advancement of technology and fast paced life have killed our imaginar minds. This thought pushed me into creating this animated short,” Sen told AnimationXpress.

Thikana follows a little boy who’s lost in his imaginary world and things around him take shape and form how he perceives them. In the film, we see the child scribbling while his brother is playing PUBG or any video game. 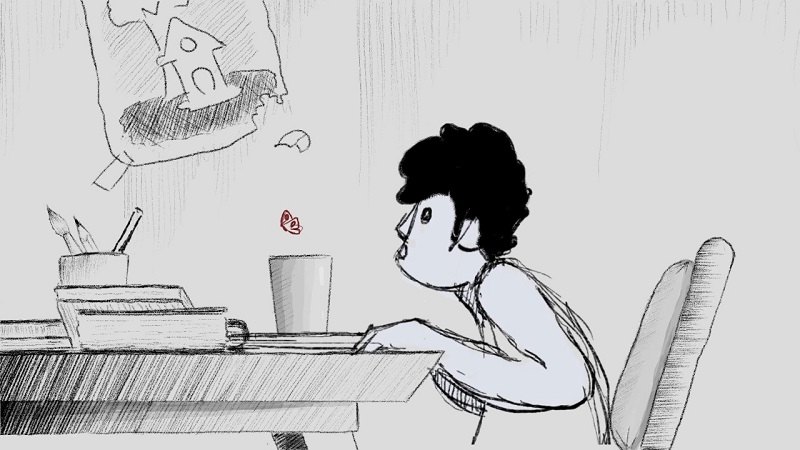 “Another influence for this film was the haunting image of a migrant worker mother pulling her child on the suitcase. The dire condition of the migrant workers due to this pandemic really disturbed me and made me realise that so many children have lost their childhood. Many became homeless, jobless, parentless while suffering from pangs of hunger due to poverty. Even the condition of children in Syria is heart wrenching. So I wanted to focus on the lost innocence, lost childhood,” he said.

Culmination of these ideas enabled Sen and Nag to tell the story through animation. Being a huge fan of animation, both of them were deeply inspired by Gitanjali Rao’s Printed Rainbow and Sen thought animation would be the perfect medium to tell this story as it focuses on a child’s imagination and the  medium allowed them room for experimentation. 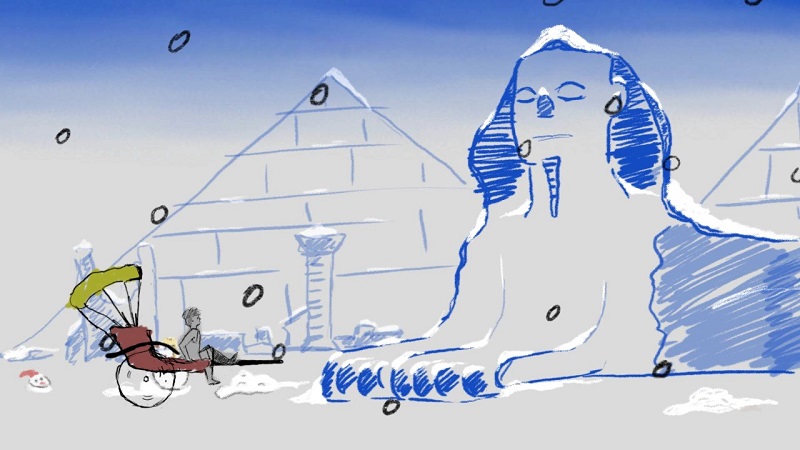 “We wanted it to have a sketchy, unfinished effect which would be like a child’s drawing copy. Anything that isn’t possible in reality would find a way of expression in imagination as well as animation. The child roams around the globe in his imagination transcending borders, so we kept a raw effect, it has a lot of double lines and instinctive approach to show his imagination running amok,” Sen noted.

Taking us through the process of animation, an animation student at NSHM Knowledge Campus Kolkata, Nag shared, “After Riddhi wrote the storyline, I primarily made a storyboard. The dream sequence was made by Surangana (Bandopadhyay), while the rest was done by me. Riddhi corrected the camera angles and a few technical things including the access part with Rwitobroto [Mukherjee](actor). Then along with my four college friends, I started animating it initially on Adobe Animate and Photoshop, but we weren’t satisfied with style and the outcome. Then we decided to use TV paint software, which is a bitmap based software and helps in representing the natural art media, and achieved the desired style. When the unlock process started myself and Riddhi edited and mixed it together.” Mukherjee also penned the screenplay of the film.

The entire process took the team nearly one and half months. TV Paint provided the exact feeling, incomplete texture and looks completely hand drawn. Besides Nag, Rajarshi Sengupta, Sourya Subhra De, Chitran Debsharma, Ayush Chatterjee worked tirelessly on the animation and pushed each other to go beyond limits.

“The character was designed and animated by De, the morphing and transitions were Sengupta’s ideas, Debsharma and Chatterjee worked on the backgrounds and all worked as a team and I’m really grateful that I have friends as well as excellent artists like them,” Nag mentioned. 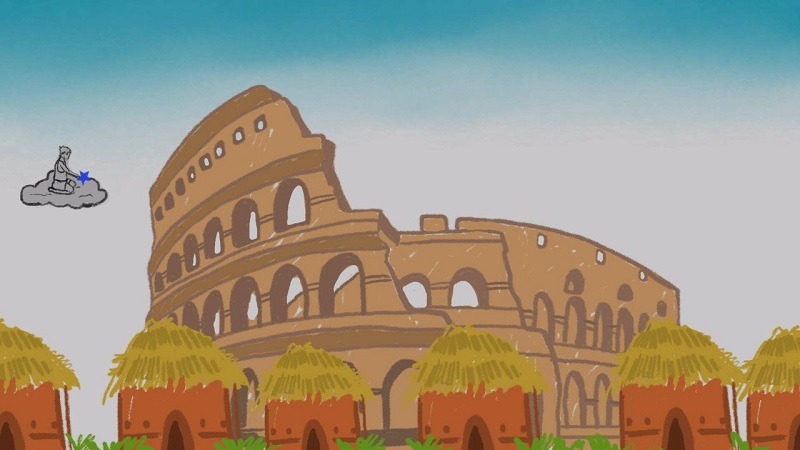 Fascinated by the world of animation since childhood, Nag was deeply influenced by cartoons, animation films and comics. His favourites are Marvel, DC, Spider-Man, Batman, Tintin, Asterix, Nonte Phonte, Mickey Mouse, Anime, and Manga. With full support from his parents, he decided to take up animation, graphic designing and multimedia as subjects. He is inspired by stalwarts like Stan Lee, Glen Keane, Aron blaze,  Studio Ghibli,  Richard Williams, Gitanjali Rao, Ram Mohan, Rajiv Chilaka and others. “In Thikana we tried to create a style of its own and learnt a lot from this project. We are grateful to Riddhi for coming with this story and giving us the chance to portray it through animation,” he said.

Nag considers Indian animation to have great potential and believes it will be encouraged around the world for its distinct, varied and beautiful styles.

The frames are beautifully created with a lot of care and thoughts. In a frame, when the protagonist roams around in his imaginary world, he finds a weeping boy at a graveyard and lends out his hand to him in empathy without even knowing who he is. Kids, unlike adults, do not judge people based on their appearances, caste, creed, religion, race and hierarchies – this thought is so subtly portrayed.

But then as the weeping boy reaches to hold the little boy’s hands, the clock  (read reality) strikes him and he is back from his imagination into the real monotonous world, where technology has taken over imagination and how. Life is nothing but time intertwined and Thikana wonderfully captures that sentiment. 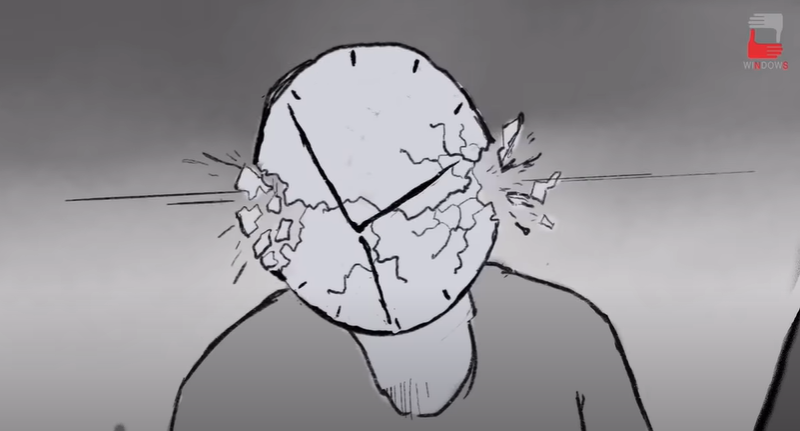 Since the film is without any dialogues, music and sound design played an important role. Sohini Gupta along with Russia based Rony Chatterjee wonderfully collaborated on the sound design. Despite the differences of time zones, they managed to pull off a soothing yet distinct background score. Thikana ends with the song, Thikanar Khonje composed by filmmaker, singer and music composer Anindya Chatterjee (part of band Chandrabindoo).

“I thought he would be the ideal person to compose this song which required a certain innocence. He told me to write the song since the film was my brainchild which he loved, and then composed the tune for it and Surangana sang it. After that, Prabuddha Banerjee, another master, brought in all the instruments and did the mixing. Surangana’s voice has a lot of innocence which perfectly was in sync with the emotion of the song from the child’s perspective,” commented Riddhi.

The lyrics of the song at certain points is very hard hitting especially – “Khuje choli Thikana’r Thikana kothay” (looking for my address, my own space) and “Thikana promaan ditey ek desh lok” (an entire country tells me what should be my address or space). Thikana translates to address, automatically connecting to home or the concept of ‘home’, which is not within four walls but a comforting space, even if it’s in our minds. Thikana evokes a sense of belonging that all of us are pursuing.

“It’s very unfortunate to see that any kind of dispute or war is about ‘an address’, a ‘land’ to conquer or possess, China and India’s recent face offs for instance. But we forget and or neglect that this planet is our home/address for us to protect and live fully. Produced by Oddventures and Half Pencil (I’m thankful to Shantanu Guha Roy), Thikana is about simple things in life, about peaceful co-existence with ourselves and other creatures of Nature. We wanted people to feel good through it, even if it’s temporarily, because there’s a lot of depression and uncertainty around. We also wanted people to question a few things without being preachy and yet impart hope,” concluded Sen.

Thikana has received overwhelming response from their friends, family as well Bengali Film Industry including actor Prosenjit Chatterjee who praised the film and its makers. Sen’s parents, actors Koushik Sen and Reshmi Sen too have been overjoyed and termed the film as an outcome of dedicated and brilliant efforts by these young creative minds.