Tastemade recently premiered its first-ever animated docuseries featuring chef Andrew Carmellini and Kelis, which was created and produced 100 per cent remotely. In this animated docuseries, well-known chefs and culinary experts share their personal stories of entertaining, never-to-be-forgotten encounters that have helped to shape their careers. These anecdotes are reenacted through hand-drawn animation with a unique style specifically crafted by Kalakala Animation for the Tastemade audience.

All of the artwork for the animated docuseries was done in Adobe Photoshop. Animation was done mostly in Adobe After Effects as well as certain shots in Photoshop with an extension called AnimDessin, which allows for frame-by-frame animation by hand. Everything is then cut together in Adobe Premiere.

Talking to Animation Xpress, Tastemade post production coordinator Arik McNally said, “It was a very exciting experience to work with the celebrity chefs and to take their untold stories and translate that into an animated form. It was also a learning experience — learning how to navigate interviews and interact with talent in a socially distanced environment.” 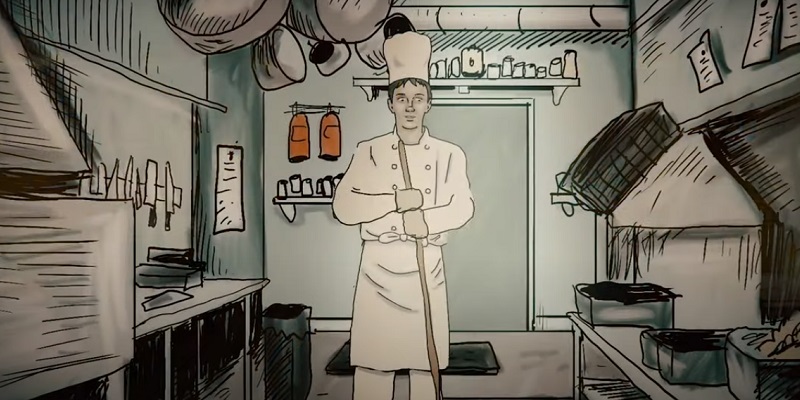 Tastemade chose to do an animated series because it allowed for remote work and to follow social distancing protocols. The team used Zoom video to conduct the interviews with talent and email to communicate with the animation team. “The key to success here was clear, concise, and constant communication, all the while making sure every voice on the team was heard,” mentioned McNally.

Animation as a medium is very powerful in reaching a larger audience. It has such a diverse following and global appeal; it crosses over every age, gender, and race. “Some may say that animation is like a return to innocence, allowing one to tap into his or her imagination and giving even an old story new life,” added McNally. Animation also allows for unconventional storytelling, where artists are able to create entirely new worlds that defy the laws of physics.

Tastemade currently only has two episodes available as a part of the series, with hopes for more in 2021.

The docuseries is animated by Kalakala Animation, with McNAlly acting as the creative director, producer and editor along with production manager Nick Cane and project manager Chauntel Anderson.