Called “the coolest, funniest, best-looking movie” (Richard Corliss, Time) that is “like nothing you’ve ever seen” (Peter Travers, Rolling Stone), the hilarious and imaginative RANGO saddles up on Blu-ray™ & DVD, released by Reliance Home Video. 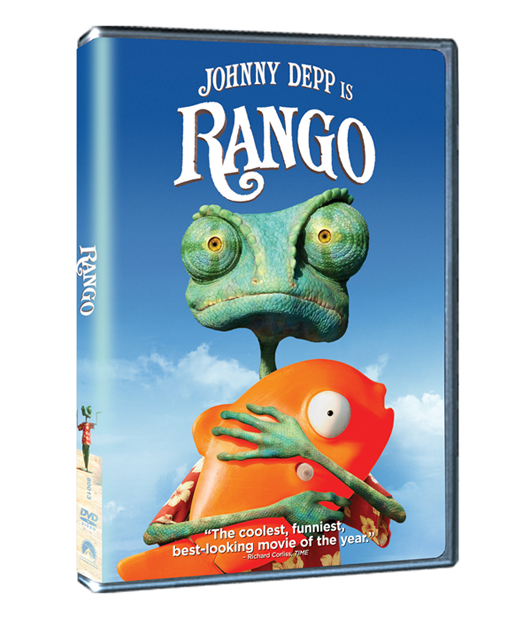 The incomparable Johnny Depp voices Rango, a chameleon living as an ordinary family pet that dreams of being a fearless hero and is challenged to become just that when he inadvertently becomes the sheriff of a lawless desert town called Dirt. Depp reteams with director Gore Verbinski, the visionary behind the Pirates of the Caribbean franchise, in this wildly original comedy, which delighted audiences of all ages, earning a worldwide box office of $241Mn. The film also features the voices of Isla Fisher (Horton Hears A Who!), Abigail Breslin (Kit Kittredge: An American Girl), Ned Beatty (Toy Story 3), Alfred Molina (Spider-Man 2), Bill Nighy (Pirates of the Caribbean: At World’s End), Harry Dean Stanton (Big Love), Ray Winstone (Indiana Jones and the Kingdom of the Crystal Skull) and Timothy Olyphant (Justified).

In-stores, the Rango fan can spot cute cut-outs of the main character of the movie. What’s more, loyalty members of retail chains, such as, Landmark, Planet M and Reliance TimeOut can get an exclusive promotional discount on the Blu-ray™ and DVD upon flashing their loyalty card. 9 lakh special customers can avail an offer on the DVD upon receiving an SMS alert.

One will see RANGO promotional campaigns in print and online – on blogs, virals, forums & quizzes on social networking sites and in exciting online contests.

The disc includes the following:

Real Creatures of Dirt—In this fun and educational piece, animal experts talk about the real creatures that inspired the characters of Rango and the filmmakers explain why they chose specific animals to reflect certain personality traits.