Ahead of its digital premiere on Disney+ on 18 June, Pixar’s upcoming animated film Luca in association with Mattel, has released the first images of toys based on the film, reported What’s on Disney Plus?. Mattel will be launching a new of brand-new action figures featuring both the young protagonists – Luca and Alberto, them as sea monsters, alongside their scooter, star gazing kit, and much more.

Luca depicts the story of a young boy experiencing an unforgettable summer. Luca shares these adventures with his newfound best friend, Alberto, as they take in all that the Italian summer has to offer, gelato, pasta and endless scooter rides. But the fun is threatened by a deeply held secret, Luca is a sea monster from another world, just below the water’s surface. 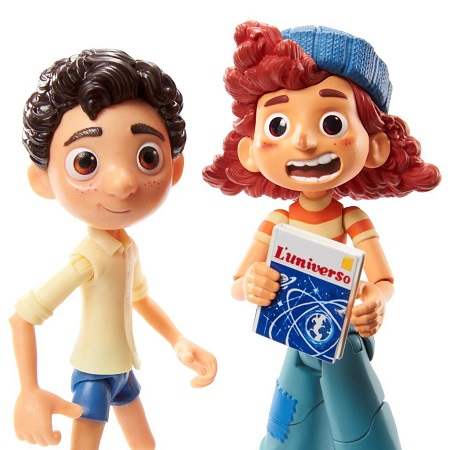 Disney-Pixar’s Luca is filled with gelato, pasta and endless scooter rides. The recently dropped trailer shows a bright world full of colours, warmth and has a classic Disney ‘feel-good’ sense about comradeship and embarking on the adventure called life!

Helmed by Enrico Casarosa (La Luna) the screenplay is written by Jesse Andrews (Every Day) and Mike Jones (Soul). Andrea Warren (Lava, Cars 3) is the producer for Pixar, with Dan Romer (Beasts of the Southern Wild, Maniac) composing the score.

These new Pixar Luca toys will be hitting shelves 1 July onwards, after the film arrives globally in June on Disney+ and Disney+ Hotstar wherever available. Everywhere else, Luca will release in cinemas.

Below are more images :