National Institute of Design’s Chitrakatha International Festival this year enjoyed the participation of 12 countries and had talks from speakers from across the world. The festival in its latest edition received a footfall of 600+ over the period of 5 days. 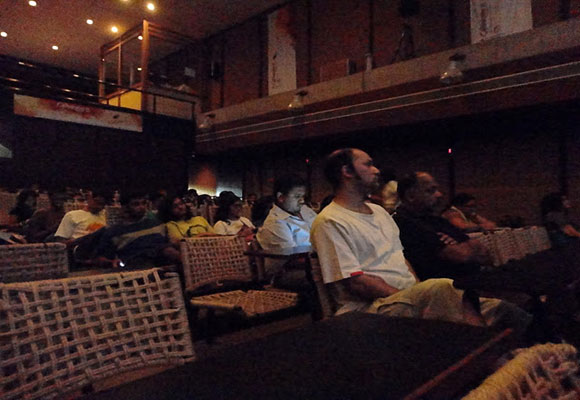 Here are some of the highlights of the event:

Tara Douglas spoke about the establishment of Adivasi Arts Trust, an organization that promotes awareness of Indian tribal culture, and works with the tribes involving them in digital media projects to make their arts more widely accessible.

West Highland Animation in Scotland was developing animation shorts on folktales aimed at promoting Gaelic language and culture to a wider audience through the medium of animation and interactivity. Leslie Mackenzie (Producer/Director) from the studio approached Tara and told that they should take some folktales from India as well. Tara who was born in India came back to India for a small research trip dealing with minority cultures in India for this project. That’s when the seeds of the Adivasi Arts Trust were sown.

The first project under this organization was the ‘The Tallest Story Competition’ completed in 2007, a collection of five short animated stories from tribes of Central India. The innovative cartoon programme consisted of fantastic stories from Bastar, Santal, Warli, Gond and Soara tribes. Presented by a Scottish cartoon character dressed in a kilt, children are asked to choose the tallest story.

Born in Tehran, Bahram Azimi is a seasoned Caricaturist and Animation Director. He has been a creator of animation characters, scriptwriter and director of more than 300 cultural and commercial animations. He is also the founding member of the Iranian Caricature Association.

Bahram shares that the history of animation in Tehran goes back upto 55 years. He mentioned that caricature art is really big in Tehran and most of the seasoned animation professional of today have started off as caricature and cartoon artists. He showcased some of his works that have swept awards along with videos from his upcoming project ‘Tehran 2121’, a USD 4 Million project focusing on the personalities of Iranian people.

He also showcased a film by Hamid Bahrami (Bamdad Animation Studio) titled ‘Traveler Of Horizon’ which delivered the message of persevering till the end and believing in yourself and your plan in a brilliant way.

History of Animation Education from NID and Beyond by I.S. Mathur

This session by I.S. Mathur traced the origins of animation in India with the arrival of the Cartoon Film Unit at Films Division, promoted and conceived by Jawaharlal Nehru. The division was run by Claire Weeks from Disney, who trained the first batch of animators in India consisting of Ram Mohan, Bhimsain, Satam, G.K.Gokhale and Kantilal Rathod.

He spoke about the establishment of NID, the arrival of Oxberry camera at NID, the association with National Film Board of Canada and showed various yester year films that were developed at NID.