Najmun Nahar, a Visual Artist from Bangladesh put together work of different artists from Bangladesh since 1971 and presented on the 2nd day of Chitrakatha 2011. She shared, “Bangladesh Animation Industry is very primitive and its in the initial stage. A lot of investment has been made in the Creative industry in Bangladesh since story-telling forms like shadow animation, puppetry has been there since more than 2000 years hence the people are inherently inclined towards Animation.

The First Animation in Bangladesh was made in 1987 which was a film about Balloons rising up in the sky and was made in Black and White. After 10 years, a Bangladeshi who now works in Canada started his own studio with young people. He got in touch with Ram Mohan, Father of Indian Animation and did a lot of work but nothing was archived.

In 1997, Green Field Toons, animation wing of Decode was formed and was one of the biggest studios and a lot of artists worked together. The studio did multiple partnership projects with Canada and Denmark and started outsourcing. Green Field disintegrated after a few years and formed Toon Bangla which is running successfully. 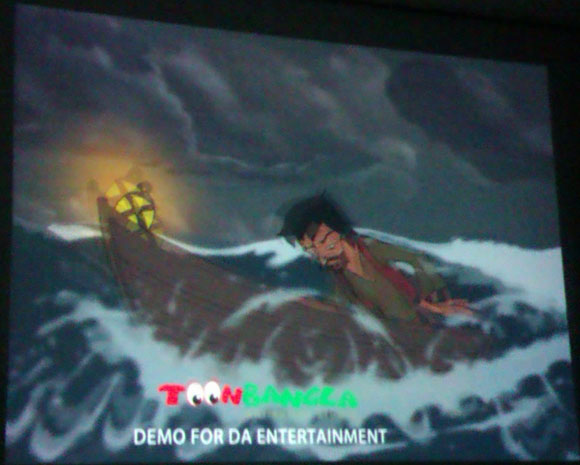 She shared, “A lot of financers expect quick returns from the Animation industry and so the big firms don‘t last for more than 6 years. In 2000, a firm shut and the artists of that firm started their own studio called ‘Lab Animatics‘”.

“Post 1999, 3D was introduced and Click House was started in 2004 along with Sesame Street. A lot of young artists started doing animation. Classical Animation was a trend, and the artists started making animation on their culture but there was lack of finances. But the main problem was that there was no Animation training. Some private institution have opened but don‘t have good standards. Artists go abroad and learn and share their work with Bangladesh.