Disney Junior has shared a special Diwali greeting from some of the stars of the hit preschool series, Mira, Royal Detective. Kal Penn (voice of Mikku), Utkarsh Ambudkar (voice of Chikku), Aasif Mandvi (voice of Mira’s dad, Sahil), Karen David (voice of Shilpa, Ashima and Rubi), Parvesh Cheena (voice of Manish), Sonal Shah (voice of Poonam) and Leela Ladnier (voice of Mira) talk about the upcoming Diwali holiday and what it means to them.

Disney also shared a dance tutorial from the choreographer of the series Nakul Dev Mahajan as he demonstrates some of Mira’s favorite dance moves from the series, including a few from the Diwali episode.

In the Diwali special The Great Diwali Mystery, Mira must track down the missing oil used to light traditional lamps throughout the town in order to save the Diwali celebration. The episode airs throughout this week on Disney Channel and Disney Junior. 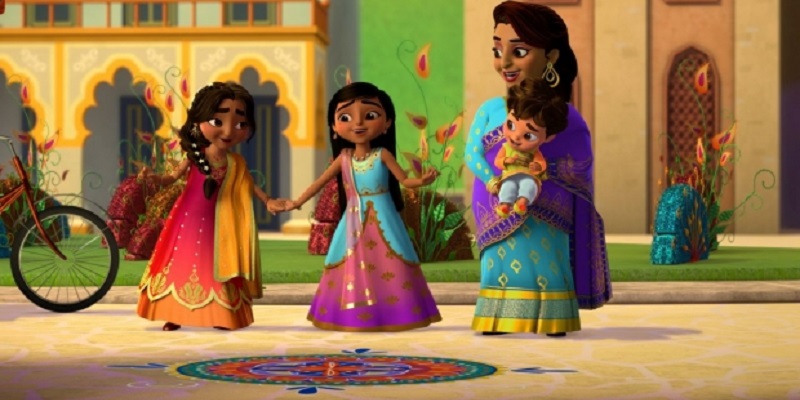 The series is a mystery-adventure about Mira, a smart young commoner appointed to the role of royal detective by the queen. She, along with her friend Prince Neel, cousin Priya, and mongoose sidekicks Mikku and Chikku, set out on mystery-solving adventures that highlight critical thinking and encourage deductive reasoning for young viewers.

The show is targeted for kids aged two to seven and their families. Every episode features two 11-minute stories celebrating the cultures and customs of India and at least one original song and dance number showcasing the cultural diversity of India.

The series is executive produced by Sascha Paladino (Miles from Tomorrowland). Dorothea Gerassimova is the art director. Becca Topol (Elena of Avalor), the series developer and story editor, will also serve as co-producer on season two. Matthew Tishler (High School Musical: The Musical: The Series) and Jeannie Lurie (The Muppets) write and produce the original songs, and Amritha Vaz (Miss India America) serves as composer. The series is produced by Wild Canary in association with Disney Junior, with animation by Technicolor India.