Animated film, Meow or Never that received many awards and is a madcap musical in which, a ‘cat’stronaut, Pucha travels the galaxy looking for the meaning of life with the aid of her AI spaceship. The further story goes: She arrives on a planet believing to find the answer on it, only to encounter a space pup, Blip who is eager to help but accidentally messes everything up by causing her spaceship to take off and land on the other side of the planet! A seemingly impossible quest to discover the meaning of life ensues with an overenthusiastic Blip taking the helm as Pucha disagrees at every turn, believing her spaceship to have calculated the answer right before it took off. As Pucha discovers a whole world beyond the closed quarters of her spaceship – meeting creatures from different walks of life and ideologies – she realizes that the answer to the meaning of life might not be so simple and clear cut.

Animation Xpress had a candid chat with the director Neeraja Raj about its journey. Excerpts follow:

What was the inspiration behind making ‘Meow or Never’?

Meow or Never is a highly personal story to me as it’s a kooky amalgamation of my existential angst and my happy-go-lucky spirit, stitched together with my love of musicals.  It is also a love letter to my dearest friends, an exploration of our friendships. I strongly believe that all types of love need to be highlighted in the media more. Familial love, self-love and also platonic love; the love and bond between two friends that can withstand any force in the world. How many of us actually refer to our friendships in the same generous way that we discuss their romantic counterparts? Meow or Never explores the power of friendship – and that the meaning of one’s life is what one makes it to be. Ultimately, it’s whatever you hold value to, in the world. This was the main inspiration for the film.

However, as I delved deeper into researching, I did draw from many real-life viral videos of cats and dogs getting along (or not), how marshmallows look melting in fire (for stop-motion reference purposes!) and Félicette, a brilliant feline. I was aware there was a lot of love for Laika, the first dog in space, but many people don’t know about the first cat in space. On 18 October 1963, a French cat named Félicette became the first and only feline till date, to ever travel to space and came back to tell the tale. Her story inspired my research as well.

Can you tell me the story behind the title?

That’s a very interesting question… There’s an amusing long-winded tale behind it! While the film was in production, we had a working title called ‘Catastrophe!’. I was very certain this was going to be the final title because it was a funny pun that delivered a hint of the weird, wonky and wild aspect of the film. However, mid-way through production in 2019, Short of the Week published their pick about a 2017 short animation film by Jamille van Wijngaarden – called Catastrophe!. It’s a brilliant and hilarious film but unfortunately for us, this meant that our title would have to change. We picked our brains for the longest time, utterly confused… Ultimately, we struck gold in an iteration of the first song that Pucha the ‘cat-stronaut’ sings – there was a lyric where she sang loudly, ‘It’s time to find the meaning of life… It’s meow or never!’ So that’s where the title sprung from!

Can you take me through the process of ideation to execution?

Meow or Never is my graduation film as part of my two year Masters program in Directing at the National Film and Television School. At the NFTS, they have several different disciplines of film-making like editing, producing, cinematography, sound design, etc. to emulate how it actually works in the industry. At the start of the second year, as directors – we pitch our rough grad story ideas to the different departments and build a team of our own. That was the first step in the pipeline!

The first two to join my team in December 2018 were my producer, Diana Podra, and my writer, Vanessa Rose. With my producer, we spent several weeks trying to sort out a plan for the entire year that would be the best way to complete this epic film. She helped acquire the key people needed both in production and VFX post. As we had a small budget to work with (provided by the school), the help we could get from outside was mostly volunteer-work, which I am very grateful for. With my writer, we worked fluidly back and forth and spent a lot of time revising the script and figuring out what the motivations and intentions of the main characters in my film, Pucha and Blip, were. What I found interesting was that the story kept evolving at each stage of the production. It was only until a month before we were set to finish the film that we hit the key finale moment – it made all the difference and made the story even stronger!

Building the puppets was very fun as well. I gave over my design blueprint character concepts to my lead model maker Gemma Byrne who then went on to bring them to life. She and her team would make clay sculptures initially and once we’d come to a point where I was happy, they proceeded to make the final armatures. Model-makers, Penelope Konstantara and Róisín McCallum, added some lovely fabrication touches to puppy Blip’s clothing and hair respectively, which really added something special to her character. Gemma was so skilled that she was able to meet even my wildest and craziest requests on the puppet design. 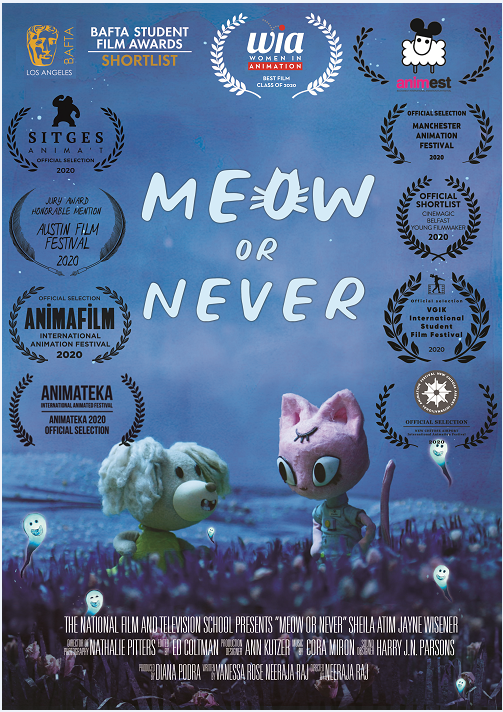 My production team which included my production designer – Ann Kutzer, and my cinematographer – Nathalie Pitters, were invaluable folks I worked with continuously as well. I provided Ann with my watercolour concept pieces of key scenes in the film, and she’d come back with brilliant maquettes and real-world designs of how they’d look like as a stop-motion set. She wanted to bring to life the handmade wash effects in my work, so she made entire sets fully out of paper with the help of her art team. She’d spend days just cutting up little grass pieces to go on the set; she is the definition of ‘dedication’! Nathalie would then come in and do many lighting tests until we found the perfect one for the scene in particular. We’d spent months on end in the black room when I’d be animating (sometimes she’d help animate the lights, too). While all this was going on, I’d meet my editor Ed Coltman every once in a week to update the animatic with the new shots and see if we were on track for telling a good story.

Tell me about the animation team who worked on it and their respective roles.

I’d like to mention that this film couldn’t have come about without my amazing crew. Any wins I make, it’s for them as well. So many people worked on it and from several different countries and though I can’t name them all, here’s me shouting out my thanks! I’d like to speak about my main team of eight – including my producer, co-screenwriter, editor, sound designer, composer, production designer, cinematographer and head model maker. They went above and beyond to make sure my vision came across in the film and I’m so lucky to have got them by my side.

My producer, Diana Podra helped me orchestrate this ambitious film while sticking to a tight production schedule. Vanessa Rose is a talented screenwriter who helped me develop the characters and story I wanted to tell. My cinematographer Nathalie Pitters was my pillar of support, as we’d be stuck in the dark, hot-shooting room together for hours on end; we got to know each other’s obsession with cats pretty well (she has two!). My production designer, Ann Kutzer and my head model maker, Gemma Byrne collaborated so very well to ensure the aesthetics of the set design and the puppets worked cohesively as a unified whole. My composer, Cora Miron, impresses me every day with her genius – we spent countless evenings together trying to make sure Pucha’s and Blip’s music hit just right! Kudos to my editor, Ed Coltman, who nailed the humorous aspects of the film with his talents and my sound designer, Harry Parsons, who always knows just exactly what audio I’d want in a particular scene, almost like a mind-reader. I’d also like to mention my lovely trio of lead animators, Amy Fitzpatrick, Mohammed Soliman and Julian Villanueva who took turns volunteering throughout the year helping me with bringing the girls to life. I was surrounded by such talents, I’m very grateful – and so are Pucha and Blip!

How much time did it take you to complete the film?  What software did you use?

This process of building the film from the ground up stretched out over the course of 14 months. Meow or Never couldn’t have come together so cohesively without each moving part of the departments working collectively and coherently – down from the retro pixel-graphics of Pucha’s spaceship to the plinky-plonky sound effects of the alien birds. As the director, I got to unify everyone onto a specific path to fulfil the vision of the story. We spent almost six months in pre-production, bringing the roots of the story to life and then started production in June 2019 to finish in January 2020 (with post-production happening simultaneously on the side). As for technical aspects, my film has both 2D animation and stop-motion. 2D animation was done in TV Paint, backgrounds were watercolours arranged in Photoshop. Stop-motion was done in Dragonframe, composited in After Effects and final editing in Avid.

How many nominations and awards has the film received till date?

When I was making the film, I didn’t really ever imagine it to win awards. I just wanted to make a film I enjoyed – and hopefully, maybe a couple of other people would, too! Of course, the accolades are a bonus for sure. It is a very nice feeling to be acknowledged by film institutes and organizations decades older than I am and to be assured that I’m on the right track with my stories.

Meow or Never has received many such awards. It was shortlisted for the BAFTA Student Film Awards in May 2020. Then, it won Best Film at the Women in Animation 2020 Showcase, which was covered by Variety magazine, Skwigly magazine, Animation magazine, to say a few. A total of 409 graduate and undergraduate student films representing 121 schools from all over the world were reviewed by the WIA Class of 2020 Showcase jury (16 industry experts including Lauren Faust, Mark Osborne and Craig Bartlett) to determine the winners. 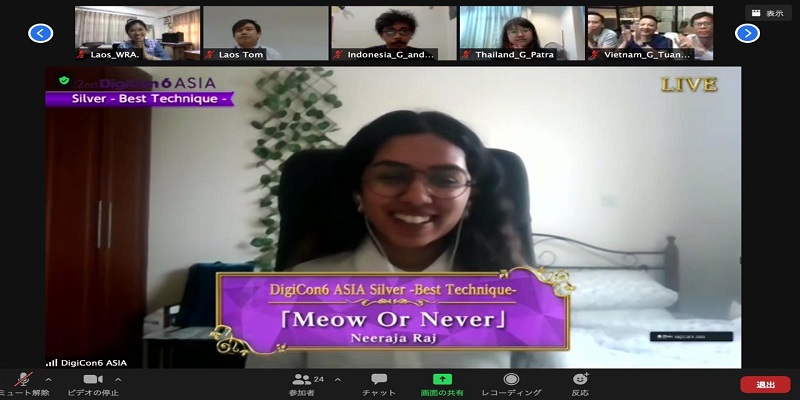 Tell us about your association with Nexus Studios?

The esteemed Nexus Studios based in LA, London and Sydney, signed me for global directorial representation on their stellar roster very recently. I have now secured a project with a high-profile charity in the UK and now, am directing my next film with a brilliant team backing the production. I’m very thrilled to be partnering with them and excited to show the world what exactly is up my sleeves!