After Singham, Simmba is ready to roar its way into the hearts of young audiences! Rohit Shetty’s iconic cop-franchise, Simmba, starring Ranveer Singh in the titular role, has now been transformed into an animated series.

POGO in association with Rohit Shetty Picturez and Reliance Animation (part of Reliance Entertainment), has announced the launch of the animated show today. The Bollywood-inspired original IP, Smashing Simmba will premiere on 14 November, on the occasion of Children’s Day at 1 pm on the leading homegrown kids’ entertainment channel.

Commenting on the launch, Cartoon Network and POGO South Asia Network head Abhishek Dutta said, “Within the diverse genres of homegrown animation, Bollywood has emerged as a theme widely appreciated by young fans. When Indian cinema’s most popular characters are presented in animated universes with relatable stories, kids absolutely love it. We are excited to associate with industry stalwarts Rohit Shetty and Reliance Entertainment for this unique venture, and Diwali is the perfect time to celebrate this partnership for Smashing Simmba.”

Smashing Simmba follows the hilarious cavorts of the quick-witted, mischievous, and fearless teenager, Simmba, who aspires to be a police officer. The official synopsis follows:

A fun-loving prankster with endless tricks up his sleeve, Simmba spends the better part of his days nabbing villains and miscreants. Thick as thieves with his friends Ricky and Kittu Khabari, Simmba finds himself on exciting adventures which perfectly represent his catchphrase, ‘Mind is Blowing’. Rarely perturbed by any situation or threat, swag is Simmba’s middle name. His tongue is his greatest weapon, spinning a web of words that confounds the bad guys. One final move – the infallible ‘Jumpy Chumpy’ – and the villains don’t stand a chance. The brave and supercool Simmba defeats the bad guys and leaves his mark – literally! 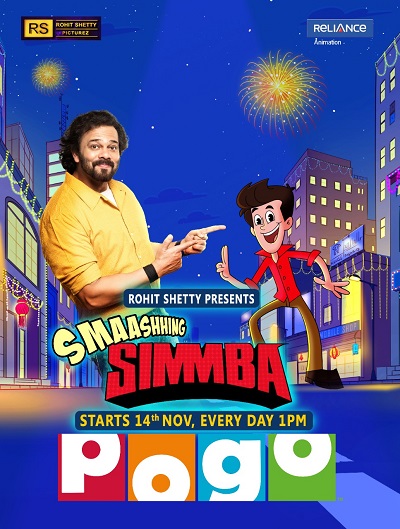 Bollywood film director and producer Rohit Shetty expressed, “An animation avatar of Simmba sounded exciting to me from the get-go, and it is amazing to see how the series has shaped up. The blend of comedy and nail-biting action, with young Simmba’s cool quotient, and funny traits, is sure to appeal to the young audience. I am eager for kids to experience the animated rendition of their favourite big-screen hero Simmba on POGO.”

Speaking about the new show, Reliance Entertainment Group CEO Shibasish Sarkar noted, “We are thrilled to be a part of this exciting new show with a pioneering channel POGO which has championed the evolution of kids’ entertainment in India. Given the channel’s vast and growing viewership comprising kids across the length and breadth of the country, there could be no better partner for Simmba’s foray into the kids’ entertainment space.”

Following the launch of Titoo, from Cosmos-Maya, POGO has been strengthening its offerings of popular and premium homegrown kids’ entertainment content. Dutta told Animation Xpress that for season one, Pogo will be launching 13 half an hour episodes, while 102 are presently in production.

“Pogo is homegrown and truly local in spirit and with that at the heart of our brand, we bring world-class animation and stories that reflect Contemporary Indian flavour. Smashing Simmba is exactly the kind of locally-made and relatable show that will delight our young viewers. He’s a teenager, an aspiring cop who along with his side-kicks punish villains and wins over the audience with his wit and charm. Premiering on 14 November, the show is a never-seen-before animated avatar of Rohit Shetty’s blockbuster Simmba in association with Reliance Animation. Our new hero is geared up to bring some action-packed adventures and we can’t wait for all of you and our fans to welcome Simmba with all heart. I’m sure kids will extend the same love to our new hero, Simmba, that they have for all our shows and characters over the years,” Dutta shared with us. 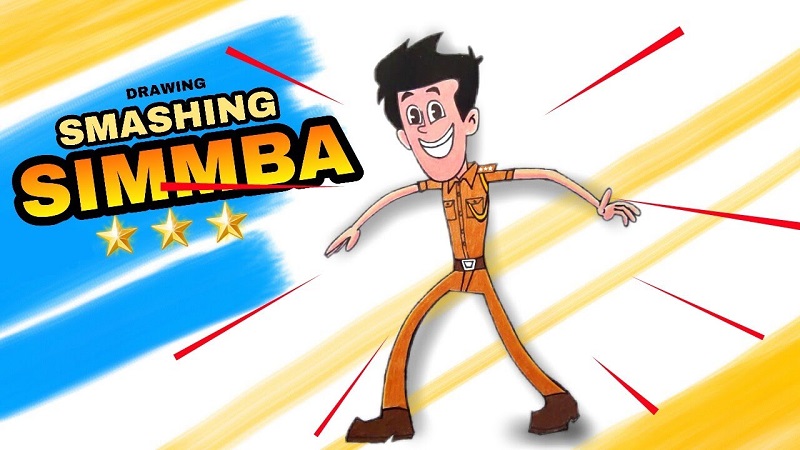 POGO’s nationwide launch for Smashing Simmba includes high-octane promotional campaigns by way of extensive digital marketing, PR, influencer engagement, brand integrations along with on-air activation. To amp up the buzz and excitement, the channel will unveil an exhilarating Simmba themed game as a lead up to the launch. Dutta also told us that currently, they’re focusing on launching the series and taking it ahead from the content side, but surely has merchandising plans given the popularity and success of the brand and Singh himself.

The show will also be available in Hindi and Tamil. Dutta revealed that celebrity endorsements are also on the way and we’ll see Shetty extensively promoting it. Whether Singh will also be a part of this promotion campaign, will be revealed in due time.

Reliance Animation COO Tejonidhi Bhandare commented, “The Indian animation space for kids is evolving rapidly along with its viewers, and there’s not been a better time for us to experiment with stories, characters, and backdrops. Cinema-inspired IPs, featuring characters who are loved for their memorable personalities and nuances, have massive potential to become popular properties. Smashing Simmba is an excellent example of how creatively Bollywood and animation can come together, opening avenues for endless possibilities.”

Pogo and CN both have seen significant growth in viewership numbers during the past seven-eight months and presently stands at number two as per BARC ratings. According to Dutta, the viewership numbers that generally soar May onwards, has started from March this year. “We have seen exponential growth in the 10 am to 2 pm slot during the lockdown period, and hence we’ve tried to put in our best foot forward for the upcoming festive season [Diwali] by launching a new show as families will come together to celebrate it differently this year,” he stated.

Targeting slightly older audiences, 9+ pan India, launching Smashing Simmba was a conscious decision for the kids’ broadcaster as they too decided to go with the trend started by Rohit Shetty and Reliance Entertainment for Discovery Kids’ Little Singham. Since then, kids broadcasters’ Bollywood animated IP romance has only gained momentum.

“Bollywood has a deep-rooted influence on kids and we have seen the results. In fact, a Bollywood movie or franchise and animation definitely make a great pair. It is not just about only telling stories but they need to have relevance and relatability and I think we have got that right with Simmba. We are very hopeful that the audience will extend the same support and love that they have showered for all our shows and characters,” Dutta commented to Animation Xpress.

Owing to the pandemic imposed lockdown, Smashing Simmba was partly created remotely and Dutta unveiled that they were lucky not to face any major problems because of it, as animation is a lengthy process and they had it planned accordingly. So, the execution was already pretty much in place for Simmba.

Now, it’s time for kids to enjoy this joy-ride with the young aspiring cop!