The first “Picasso Jaipur International Animation Film Festival -JIAFF 2011 is slated for 12th – 13th October 2011 in the pink city of India. A total of 58 films have been selected/ nominated for the screening out of the 229 films received from 21 countries. 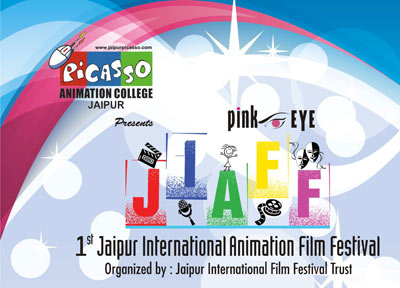 The festival being presented by Picasso Animation College in Jaipur will have 24 foreign films, 13 Indian films and 7 films from Rajasthan. Films have been received from India, Russia, Canada, the United Kingdom, Australia, Portugal, Spain, and Switzerland among others.

Some of the films being screened at JIAFF include 10 films from the Animation Society of India, one film each of Kamini Kaushal (Raigisthan Ka Jahaj) and Rammohan (The White Elephant), noted filmmaker Govind Nihlani‘s film “Kamlu” which is based on Rajasthan and NishithTakia‘s film “Dehli Safari” will have a demo presentation. For the complete nomination list.

The purpose of this film festival is to promote newer animators, exchange of knowledge, information, ideas & culture between India & other nations in context of their social and cultural ethos. JIAFF also promotes friendship and co-operation among people of the world through the medium of animation films.

Scheduled of the Festival: