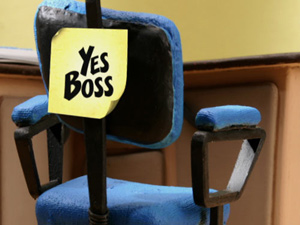 Be it feature films, D2DVD, animated TV series, mobisodes or music video, the animation flag is being furled across the entertainment sphere. Not only is this medium being used to create interesting content, animation can be applied in a very effective way for interstitials and title sequences too.

An example of high quality Clay Animation being used for a title sequence is Yes Boss, a show on Sony‘s SAB TV. Created by Mumbai based Famous House of Animation, the animation in the title sequence introduces the premise and the characters of the show in a spoofy manner.

This show is based around three characters- the boss, his employee and employee‘s wife who is the boss‘s secretary. In each episode all three go through different situations which are the source of the comedy. Having an animated title sequence compliments the sitcom theme of Yes Boss and helps it stand out better.

Speaking to AnimationXpress.com Shilpa Vaswani from SAB TV shared, “Yes Boss is about usual people in an unusual situation. It is real and yet unreal. This unique facet of the show needed to be somehow captured and conveyed in the title sequence in an interesting and clever manner. Claymation allowed us that ‘stretch‘, to create ordinary situations in a completely new and unimaginable manner, thereby adding another dimension to the show. It allowed us to widen the canvas”

Yes Boss is one of the longest running sitcoms on TV and has recently completed 500 episodes. The claymation for the title sequence took four weeks and the packaging has been on air from 8th May,‘06.

Talking about the usage of claymation in the title sequence Shilpa said, “Claymation has never been used in a title sequence for a TV show in India. At least, not in the recent past. The idea of using Claymation itself is novel and more importantly, highly relevant. The most amazing thing about the title sequence is that it mirrors the soul of the show beautifully. The situations depicted in the sequence are as real as they get (with respect to the show and the characters), and the leap we have taken to exaggerate the effect using Claymation is what makes it stand out from the clutter. Claymation is a highly timed and effort intensive art, hence the flow of the sequence was well thought before the shoot. Right from perfecting the clay models to the music and the editing, at all stages care was taken to make the sequence engaging, entertaining and unique in its presentation.” 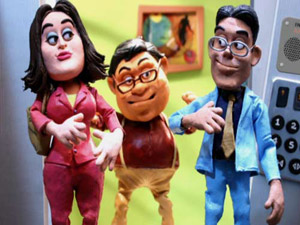 Famous House of Animation‘s Thomas Jacob shared the studio‘s experience in creating the clay mation for Yes Boss.”The Yes Boss project was interesting in many ways. For one, it was the first time a live-action TV show was using clay animation in its opening title sequence. Second was the extremely tight deadline that we were working with. Since the animated sequence had to reflect the real-life show, the first thing we had to do was design characters that resembled the actors themselves. Not just in terms of visual resemblance but also in terms of mannerisms and unique personalities – that the audience was already familiar with. That done, we worked closely with our clients at Jigsaw and Sony to conceptualize the situations and eventually formed the complete sequence.”

So though, one awaits the day when India will have its own animated sitcoms and cult shows like Simpsons. The claymated title sequence in Yes Boss is a good step to that end.