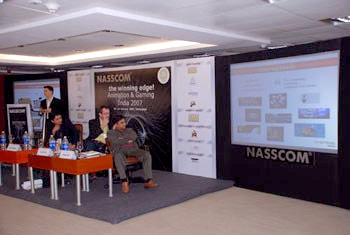 The panel for Building Business Around Mobile Gaming, focusing on the ongoing presentation

Following the insight was a brief presentation by Brendan on the top mobile gaming trends of 2007 which are:
1) Advertising supported games
2) Get set for direct to consumer
3) Next generation NGage
4) More connectivity and multiplayer.
5) More crossover with web and online gaming
6) 3D gaming will take off
7) Flash life will make an impact
8) Growth of game audio
9) More camera and location based games

Brendan‘s presentation was followed by a talk by Keith Liu, who spoke about Nokia saying, “We at Nokia recognize that there are definitely opportunities for building a business around mobile games. Mobile gaming will reach 7 billion euros by 2010. We have to look at how we can turn opportunities into profit.”

According to him the following three key ingredients are essential for that to take place:
a) Multimedia converge devices which are the platforms for distribution. There were 90 million coverage devices in 2006 which will increase to 250 million in 2008.
b) Holistic end to end service which is comprehensive to the whole value chain. People can now discover, buy, play, share and manage their games. The perception of playing mobile games has changed.
c) Compelling Content. The main idea behind games is to have fun and the games have to be graphically rich. The key is to have choice.

Sharing his experience Salil Bhargava elaborated that it is important to focus on what part of the value chain one wants to be in and also the choice of whether it is from the development or the publishing angle. This he said depends on the appetite for risk. He commented, “The cost for acquisition of content is increasing and also a culture of making Bollywood centric games has set in which is an expensive strategy. It is also expensive creating our own products.”

Mobile gaming emerged in India at the same time as it did in other parts of the world but one problem that is faced is getting game designers. “Porting is taking off which has to be supported by quality assurance. Compelling content has to be created whose cost is high. Hence, India seems to be a favorable market with significant business opportunities” he added.

From the mobile games and video games publishing company, Player X it was Paul who took next strike. In his opinion APAC is the world leader in games and the US is fast catching up. He shared, “Bigger publishers are now changing the scene. What is evident now is that the small studios are producing a lot of games and are eager for them to be played. Nokia is now developing content on flash.”

Having been around the gaming scene for almost ten years now, Dhruva interactive set up its mobile division in 2003. Speaking on content in India, Rajesh shared, “Thousands of games are made with almost the same features.” The key is to experiment and develop features that will connect. Games should be made in a manner that is perfect because after all they are interactive and have to be of high quality. There is now a shift from low end color screen phones to TFT color screens. He further added, “If you want to turn someone into a good developer, you have to give a holistic experience. Needs and demands for porting are more straightforward from that of making games which is of prime importance. Porting is important and the number of people required for it is large. There has been a paradigm shift of gaming as a career. The core is development and need for training and time.”

What came across as evident from the session was that a lot of studios are already building their business around mobile games. With the increasing number of mobile phone users and interest in gaming, it sure does look like a lucrative business proposition.