The first ever Sanskrit animated film, Punyakoti is all set for a sequel, director Ravishankar Venkateswaran revealed to Animation Xpress.

“We are planning part two of Punyakoti, this time in Hindi and regional languages. The story is presented from the perspective of the next generation after Punyakoti grows old. Putta and his friends who were children in the earlier movie have grown up and are presenting the story from their perspectives,” Shankar said.

Like the first film, Puppetica Media is producing the animated sequel and is actively seeking co-producers and investors to take the story to digital channels. Punyakoti was the first animation feature in Sanskrit to be released worldwide on Netflix and a pay per view platform, Plexigo during the lockdown in early 2020. It has won critical acclaim and has won aix national and international awards so far. 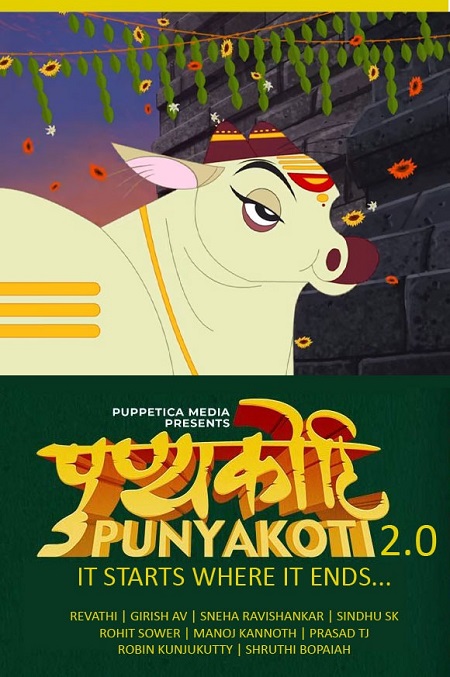 Post the critical appreciation, quite a number of industry people suggested taking the franchise further. After nearly three months of deliberations, the team have decided to revisit the story and present the story again from a different perspective. Titled Punyakoti 2.0: Hum Sab Ki Kahani, it is both a sequel and a modified version of the Sanskrit original. The theme of the story this time will be the importance of preserving water sources and planting trees.

“The team has nearly spent five to seven years creating the IP of Punyakoti. It has to reach a wider audience. So it is very critical that we keep the dream alive. At the same time, we did not want to dub the Sanskrit original as it was a unique product. So, during the lockdown, the team came out with the idea of taking the movie forward with a sequel. This will help the animators and technicians who have been affected by the pandemic. The new theme is very relevant for the next generation and will be a fun-filled feature film. We are hoping to implement some new things that we have learned in the course of making Punyakoti into the new feature. Actress Revathi who voices the titular character Punyakoti, has agreed to co-direct the movie,” mentioned Shankar.

Punyakoti created a new milestone when it became one of the largest crowdfunded projects. Sneha Ravishankar, who voices Putta and is working on the script of the movie stated, “The movie starts where the Sanskrit movie ends but we plan to recap the story of the Sanskrit movie in the sequel as well before moving on to emphasise on an important theme of conservation of nature, that is relevant for today’s times.”

Girish AV, who headed the animation team for Punyakoti will be co-directing the new movie. Much of the original technical crew will return for the upcoming project as well. The team is also looking for well known voices in the Hindi film industry for voice casting.

Punyakoti executive producer Sindhu SK added, “We are looking for funding partners, co-producers and distribution partners. We want to create something original and memorable in the animation IP space that is growing in India.”

The movie is likely to release in 2021 with the production work progressing in Bengaluru, Chennai, Thiruvananthapuram and Mumbai simultaneously.