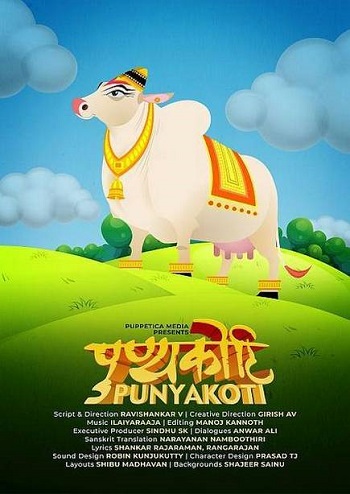 A few days ago we reported about Punyakoti, the first animated film in Sanskrit being taken up by Netflix. The animated film debuted on Tuesday, 31 March and is presently streaming on the platform.

Given Netflix’s rich content library, Punyakoti’s addition to its slate has definitely given a boost to India’s independent animated content. Though it’s not a Netflix (Indian) original in animation like Mighty Little Bheem, streaming on the OTT platform will surely give Punyakoti the attention it as well as Indian animation deserves.

Said director Ravi Shankar Venkateshwaran to us, “Netflix is known for creating and acquiring quality content, and Punyakoti opening on Netflix is a matter of pride for us. We are happy that the first Sanskrit animated film will now reach a global audience.”

This also draws our focus to Netflix investing in the medium and as Netflix India original film director Aashis Singh said at Indian Television dot com’s Content Hub, earlier this month, Netflix is surely taking animation more seriously now. “We’re definitely interested and open for Indian animated content. We’re in talks with a few creators and soon will announce once things get mature.”

Produced by Puppetica Media, Punyakoti is inspired by a popular folk song in Kannada, with an imaginary take on the circumstances that led to the encounter between a truth-speaking cow and a tiger in a village that is facing an impending drought.

The script of the movie is from a children’s picture book by the same name, written by Shankar himself. The movie follows a five act structure and is modelled along the lines of any international quality production in terms of creative and structural finesse.

Speaking further on the prospects of Indian animated content on global platforms, Singh told AnimationXpress, “We’re in conversation with our L.A team and are actively looking at content from India, animated and otherwise, especially after Mighty Little Bheem. Because India has so many stories. Purely from a cultural point of view and characters we have from mythologies and tales, the stories have the capacity of resonating around the world. So, we are actively looking to create something in the animation front, and soon will identify something for an animated film or an animated short.”

“See, what one has to keep in mind is that we have a certain subscriber base right now, and there are that many families and kids. So the subset is smaller. As we grow, obviously, the demand will only increase and Mighty Little Bheem has given us that much confidence to take Indian animation into consideration. Basically it’s the content that speaks for us. Be it in animation or live-action, if it’s good, everybody will watch it,” he said.

In India, the animation industry is still niche in terms of providing entertainment, even though the sector has grown exponentially over the past few years. What makes the industry suffer to a certain extent is the lack of adequate budgets which affects the quality of production.

Even Punyakoti was no exception and was made possible through crowdfunding. In 2015, Punyakoti became one of the largest funded projects of its kind with over 4 million Indian rupees from the crowd through Wishberry, a crowdfunding platform in India. In fact, Shankar is still waving off his loans which he took to make Punyakoti see the light of the day.

Most animated projects get stalled as they don’t receive enough funding due to slashing of budgets. But the scenario is quite the contrary for creators working with Netflix. As Singh continued, “That’s our duty as Netflix to look at the budget. We’re very quality conscious. We have interacted with animation teams, had discussion with content creators and come up with a budget assuming that let’s not give them a budget and be tight about it. Rather we have always come up with suggestions that please spend a little more on things like the fur or hair may be. These are small little things that add to the quality of the content which we don’t compromise on.

There’s animation coming out of Japan which is one of the best. And if as India, we want to compete with them, we have to come up with the best. And thus we don’t differentiate as Netflix and want to try every possible thing to be at par with international standards.”

Now, it’s a matter of time to see how much Indian animated content finds a place on global platforms. With Punyakoti, it’s certainly a good sign.